Carrie is the 2002 and second film adaptation of Carrie. Many say it is a remake, but it isn´t, because it is a far more faithful adaption of the book with a twist ending, including scenes, that didn´t appear in the other adaptations such as "The Rain of Stones" or "The town destruction". It was supposed to go on for a TV series, but it didn´t happen, because of the low ratings.

This remake was done by David Carson. It also featured Carrie White as a little girl encountering Stella Horan, one of her neighbours. In this adaptation her mother was less chaotic, but stll had a crazy essence to her. Carrie, played by Angela Bettis, was a very shy and lonely outcast and many said, she fit the character.

Carrie White is a lonely and painfully shy teenage girl with telekinetic powers who is slowly pushed to the edge of insanity by frequent bullying from both her classmates and her domineering, religious mother.

Warning: this text contains details about the plot/ending of the film.
Several people are interviewed in a police station, including high school senior Sue Snell, gym teacher Miss Desjarden and Norma Watson. Detective Mulchaey is investigating the Black Prom disaster and the disappearance of Carrie White. The story is told in flashbacks. A few weeks before Carrie is seen playing baseball during gym class. She cannot play the game well and is therefore teased by her classmates. Later she is seen in the shower. There she gets her first period and is terrified because of it, because her mother never told her about it. Tina finds out about it and tells her other classmates about it, who then mercilessly abuse her verbally and also physically because of it until Miss Desjardin intervenes. She then explains Carrie what she has had and goes to Principal Morton to explain about it. Carrie is then taken a free day because of it. She wants to go to the locker to take her things only to discover, that it was filled with Tampons against her will in a cruel manner. She takes her things and then goes away. On the voyage home she meets an 8 year old boy in a bicycle, who bullies her. She then reflexively throws him and the bicycle against a tree. Later she continues and reaches home. There, based around the prior event, she suddenly remembers an event, that happened, when she was a girl. Back then her mother mistreated her for talking with a woman called Estella Horan, a girl she considers a slut and then chaos happened inside the house and meteors fell towards the house, while this happened. Some damage still remain because of it today. Keeping this in mind she enters the house. She meets her mother, who looks at a great cross and tells her, she has become a woman. She punishes her for that, because of the corresponding "original sin" by locking her in the closet.

On Monday morning the girls receive punishment from Miss Desjardin. Her intention was to give them three days suspension and refusal of their Prom tickets, but the administration had decided a week´s detention instead with Miss Desjardin, who would run them ragged. Otherwise they would have three days suspension and refusal of their Prom tickets. The girls cave in to the punishment with the exception of Chris, who doesn´t show any regret for what has happened and hates Miss Desjadin for putting her in place swearing revenge. Carrie in the meantime begins to investigate what is going on with her and finds out through the internet by investigating miracles, she has telekinesis and begins to practice and control them with more and more success all the time.

Her attempts to be reinstated to the Prom through her father fail, while Sue feels regret for what has happened and convinces her boyfriend Tommy Ross to bring her to the Prom instead of her. When he invites her, she in time accepts and wants to go to the Prom, but her mother refuses. This time, however, using her telekinesis, she is able to stop the abuse and tells her mother in the face she wants to live her own life and go to the Prom. She begins to prepare for it and makes her own dress for that. While she searches for an ideal lipstick, Sue meets her and helps her in that. Carrie shows gratitude for it. In the meantime Chris, with the help of Billy Kenny and Jackie plan revenge on Carrie White by going to an animal farm in order to kill a pig, whose blood they then use to put it on a bucket and place it above the place, where the queen will be elected.

At the Prom Night Margaret tries a last time to prevent Carrie to go to the Prom without success. She then goes out of the house. Later Tommy visits her and takes her with him to the Prom. There she enjoys herself for the first time in her life. In the meantime Tina maipulates the election to Prom King and Queen to make sure Carrie and Tommy will be elected. Norma Watson gives the corresponding results and, when they go to the stage, Chris, also under pressure of Billy, throws the blood on her and later also lets the bucket fall, which falls on Tommy´s head killing him in the process. The majority of the prom goers under the influence of Tina and Kenny laugh at Carrie, which is put under a catatonic state because of it.

In this catatonic, subconscious state she freaks out and begins to kill everyone at the Prom. Only a handful, including Miss Desjarden and Noram, survive it. She then leaves the High School, which burns to the ground and goes home leaving a trait of destruction on the way, including the destruction of downtown and a gas station. In the meantime Chris and Billy enjoy what they have done, untill Jackie fills them in about what has happened. They then go to the town. They find Carrie on her way home and try to run her over, but Carrie´s telekinetic powers prevent this from happening. She thows them into a tree killing them both. At home she then  puts herself into the bathtub full of water with her dress on. There she regains her consciousness.

A minute later her mother comes in. Now, completely mad, she tries to drown her daughter and nearly succeeds. Gathering her last forces Carrie stops her mother´s heart saving her life on the way, but only barely. She then stays between life and death, until Sue finds her. She detected her presence at the gas station and followed her. She gets her from the bathtub and manages to revive her. At this moment, in Carrie´s will to know what happened, while she was in a subconscious state, Carrie transfers telepathically all her conscious memories to Sue. She then spells the water out of her lungs and asks what has happened. Sue then decides to hide her until everything is calmed down and thinks she is dead. Miss Desjarden, in the meantime, reveals to Detective Mulchaey her suspicion, that Carrie had telekinetic powers and that she is behind the disaster, which killed 234 people.

After two weeks Sue brings Carrie to the grave of her mother to visit her for the first and last time. After that she brings her to Florida, where noone will know her. Visions of her dead mother and the dead Chris are haunting her.

In May 2002, television network NBC commissioned a film adaptation of Stephen King's novel Carrie. The network originally wanted a "movie-of-the-week", but the studio decided to capitalize on the production, so the film was instead planned as a backdoor pilot for a potential television series.

Filming started the following month in Vancouver, British Columbia, Canada, on June 12, 2002, and took at least twenty days. A soundtrack for the 2002 NBC version of "Carrie" does exist, but it was only released as a promotional item from Access Denied Music. 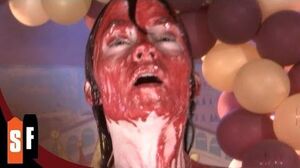 Retrieved from "https://horror.fandom.com/wiki/Carrie_(2002)?oldid=135545"
Community content is available under CC-BY-SA unless otherwise noted.