This page needs improvement. It can be improved by: pictures, list of deaths, quote, information/trivia

The film is about six friends who are stalked by a murderer that uses chains to kill them if they do not pass on the chain letter.

The film opens in a garage with an unconscious young woman having her head wrapped in duct tape and her legs chained to the back of two cars. A man and a woman walk to their cars on their way to work. As the couple start their cars they exit the driveway. The woman in the garage wakes up frightened as the man is about to depart, the woman in the car notices the victim, but as she exits her car to warn the man, he drives off.

Neil Conners receives a chain letter from an anonymous person telling him that he is the first person who links the chain, and instructing him to forward it to five people, or else he will die. His sister Rachael then enters his room and forwards the letter, but to only four recipients. Neil then adds his sister to the list and sends it.

Jessica "Jessie" Campbell, who is Rachael's best friend, gets the letter and forwards it to five friends; Johnny Jones also receives it but refuses to send it, believing it to be ridiculous. While he is getting a drink of water at the fountain in the gym, a black hooded figure slams his head on the fountain three times and knocks two of his teeth out. Unconscious, he is chained arm-by-arm and leg-by-leg to a gym set and has his bones broken, after which the killer uses the chains to slice his face open, which kills him.

Jessie becomes suspicious as more people start to die. Rachael is taking a bath, then becomes suspicious of a possible intruder inside the house. She investigates and soon finds the killer standing behind her. He whips her with the chain several times, as she runs through the house to get away. Re-entering the bathroom, she locks the door, pacing back and forth, waiting for him to attack. She walks up to the door and places her face next to it, listening. Suddenly realizing the killer is on the other side doing exactly the same thing, she backs away rapidly. A few seconds later, she is attacked in the bathroom by the killer, who breaks through a side wall into the room, stabbing a spear into the top of her head, splitting it open. As this happens her eyes roll down and then back up.

Jessie, Neil, and Michael must now try to stop the murders. A few days later, Jessie attends Rachael's funeral and is greeted by Detective Jim Crenshaw, and he tells her to forward the chain letter to him.

Later on, as more people send Neil the message, he panics and decides to delete all of them in order to be able to confront the killer. The killer, however, is on the roof of Neil's room, and sends a chain smashing through his ceiling. Neil dies as he gets dragged up to the roof of his house by chains with various sickles and a hook.

It is revealed that the man behind all the killings was a soldier. During the war, he was tortured by the enemy because he had a government-issued cell phone. He returns to the United States severely disfigured and breaks out of a hospital, disappearing. He starts a cult of "anti-technology" followers who are marked by bar-code tattoos.

As the film closes, the woman chained to the cars in the beginning is revealed to be Jessie, who is killed because she sent the chain letter to Detective Jim Crenshaw without sending it to four other people. Michael tries to save her, but is too late; when her father pulls out of the driveway, Jessie is ripped apart.

As the film ends, Detective Jim Crenshaw is shown chained to a table while the killer is making chains. 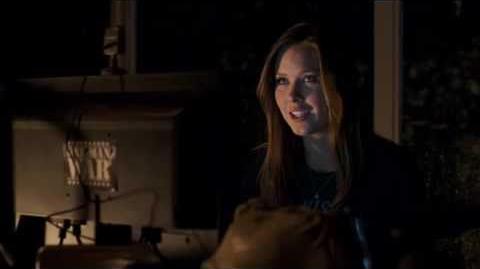 Retrieved from "https://horror.fandom.com/wiki/Chain_Letter_(2010)?oldid=129535"
Community content is available under CC-BY-SA unless otherwise noted.