Six tourists hire an extreme tour guide who takes them to the abandoned city Pripyat, the former home to the workers of the Chernobyl nuclear reactor. During their exploration, they soon discover they are not alone.

Chris, his girlfriend Natalie, and their mutual friend Amanda, are traveling across Europe. They stop in Kiev, Ukraine, to visit Chris's brother, Paul, before heading on to Moscow, Russia, where Chris intends to propose to Natalie.

Paul suggests they go for an "extreme tour" of Pripyat, an abandoned town which sits in the shadow of the Chernobyl Nuclear Power Plant. Chris is against going on the tour because of the potential danger and would rather stay on the original plan of going to Moscow. They meet tour guide Uri and are joined by a backpacking couple, Norwegian Zoe and Australian Michael. Uri drives them through Ukraine, before they arrive at a Chernobyl Exclusion Zone checkpoint, where they are refused entry by the Ukrainian military. He then takes them to an alternate entry he discovered years ago.

The group stops at a river where Uri points out a large, mutated fish apparently able to live on land; while returning to their van several other mutant fish are seen in that river. The group is worried about radiation poisoning, but Uri assures their safety with a Geiger counter. After spending a few hours exploring, Uri takes them to the upper floor of an apartment building and shows them the Chernobyl nuclear plant on the near horizon. After hearing noises at the other end of the apartment, it is found to be a bear which runs through the hallway past them, but not harming them.

The group prepares to leave Pripyat, and Uri finds the wires in his van have been chewed through and destroyed. He tries to radio for help, to no avail. As night falls, the group decides on whether to hike to a nearby checkpoint which is 20 km (12 miles) away, or to stay put and wait for help. Suddenly, strange noises come from outside, where Uri and Chris go out to investigate. Shots are heard and Paul runs out, only to return with Chris whose leg has been severely mauled, and claims that Uri has been taken. While they decide to stay the whole night in their locked vehicle, suddenly they are attacked by dogs.

The next day, Paul, Michael, and Amanda go out to look for Uri. They follow a trail of blood to an abandoned cafeteria and find Uri's mutilated body. They take his gun and are chased by a creature through the building before returning to the van. Amanda checks her camera and one of the pictures shows a humanoid creature inside one of the apartment buildings. Natalie stays with the wounded Chris while the others begin the hike to the checkpoint.

During the hike, Paul, Amanda, Michael, and Zoe find a parking lot, where they find parts for the van. On the way back they are chased by dogs and also attacked by mutant fish in a stream. Night falls as the group returns to the van, only to find it upside down and ripped to shreds. They find Natalie's video camera, showing that she and Chris were attacked and captured by humanoid mutants. While searching for the two inside an old building, the group is chased by more mutants.

During their escape, a traumatized Natalie is found and rescued, but when the group gets distracted by a mysterious young girl, Natalie is captured again. The rest of the group is swarmed by a horde of mutants and are forced to retreat. While fleeing through an underground passage, Michael is captured. As they continue, they find Chris' engagement ring for Natalie, with no sign of Chris. While climbing a ladder, a gang of mutants drags Zoe back down, forcing Amanda and Paul to leave her behind, emerging from the passage right beside the exposed reactor core. Paul recognizes that extremely high radiation levels are causing their skin to blister. They come upon Natalie's body before emerging outside, where they are confronted by Ukrainian military personnel. Blinded by radiation damage, Paul stumbles toward the soldiers, who fatally shoot him.

Amanda falls unconscious, and later awakens on a gurney. Several doctors, in protective hazmat suits, inform her that she is in a hospital and they will help her. The doctors reveal that the "creatures" were escaped patients, and after realizing that Amanda "knows too much," she is then forced into a dark cell and is swarmed by the recaptured patients, as the doctor closes the door's viewing shutter.

The film, produced by Alcon Entertainment and distributed by Warner Bros., was released in Russia, Canada, Bulgaria and the United States on May 25, 2012.[5] It went on general release in the United Kingdom on June 22.

Chernobyl Diaries was released to DVD and Blu-ray Disc on October 16, 2012, in the US. The UK DVD and Blu-ray release followed on October 22, 2012. The UK release presents a longer version (about 2½ minutes) of the film than the American one.

Prior to film's release, the Friends of Chernobyl Centers, U.S., had said that the film's plot was insensitive to those who died and were injured in the disaster, also the movie was sensationalizing events that had "tragic human consequences". In response, the producer, Oren Peli, said that his film was done with the utmost respect for the victims, and that the Israeli charity Chabad's Children of Chernobyl wrote him a letter expressing their "admiration" and "kudos" for his creation. Despite this claim, others described the film as a "plot-less mess of disaster porn", citing UK-based charity Chernobyl Children's Lifeline, who thought it was "disgusting".

The film received negative reviews, currently holding an 18% rating on Rotten Tomatoes based on 85 reviews. The websites' consensus is "Despite an interesting premise and spooky atmospherics, Chernobyl Diaries is mostly short on suspense and originality". Critics at Spill.com acknowledged the filmmakers' attempts to create a chilling atmosphere, but criticized the film's shallow characters, numerous clichés and failure to deliver even the most basic special effects. Joe Leydon's review in Variety stated, "Scattered stretches of suspense and a few undeniably potent shocks are not enough to dissipate the sense of deja vu that prevails." James Berardinelli wrote in ReelViews, "Chernobyl Diaries is afflicted with a fatal flaw that damages many horror films: after a better-than-average setup and a promising first half, everything falls apart." Mark Olsen, a critic from the Los Angeles Times, said: "The lack of suspense and surprise in this dispiritingly rote film becomes its own form of contamination". Positive reviews notably include Frank Scheck from The Hollywood Reporter who said: "A basic monster movie that benefits greatly from its unique setting, Chernobyl Diaries again demonstrates Oren Peli's ability to wrest scares with minimal production values and a clever premise. 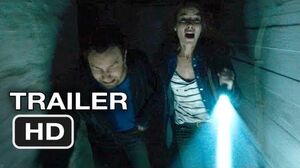 Retrieved from "https://horror.fandom.com/wiki/Chernobyl_Diaries_(2012)?oldid=129545"
Community content is available under CC-BY-SA unless otherwise noted.