In the small town of Cherry Falls, a psychotic murderer is killing off the virgins of the local high school.

In the woods outside the small town of Cherry Falls, Virginia, a young teenage couple is getting romantic in a car when a female, black-haired killer suddenly appears and murders them both. One teenage girl, Jody Marken - the daughter of the local sheriff - is trying to deal with her boyfriend, Kenny, who thinks it's time to go "all the way." Jody gently tells him 'no', then goes back home only to find her father, Brent, upset that she's out past curfew.

Brent and his deputies begin to investigate the murder the next day. They are shocked to see that the killer carved the word "virgin" into both victims. With no leads, Brent's investigation leads him to the high school, where he tries to learn more clues. At the high school, Brent runs into intelligent English teacher Leonard Marliston, who urges Brent to divulge more details of the murder to students and the town so as to eliminate the possibility of secrets.

Soon enough, the killer reappears, showing up at the front door of a suburban house. When the female teenager inside is reluctant to open the door, the killer, in a strange high-pitched voice, says she's "Lora Lee Sherman," a friend of the parents. The teenager warily opens the door and is quickly murdered.

Police arrive, and again see "virgin" carved on the victim. A doctor confirms that, while he can't be sure of the one murdered boy's sexual history, both of the female victims did in fact have their hymen intact at the time of death. The Feds come to assist with the murders. Brent goes to his daughter and asks if she's still a virgin. Strangely hoping that she will say no, he is proud of her but scared when she reveals that she has never had sex. Concerned for the town's safety, Brent holds a meeting at the high school to tell parents the nature of the crimes. (No students are invited.) Jody, however, sneaks in to the school with her friend Timmy and learns the details of the murders. Temporarily separated from Timmy, Jody begins to sense she is being followed throughout the halls. She runs into Marliston, who also feels that someone else is present. He checks around, finds nothing, and leaves. Jody finds Timmy (who had borrowed her cell phone) stuffed into a locker - murdered. Before she even has time to be properly horrified, the female killer appears and takes slashes at her with a knife. Whilst trying to flip the killer over, Jody is knocked unconscious and the killer takes her into the science lab and cuts her, but she manages to fend off her attacker for a few moments before her father appears and the killer mysteriously vanishes.

Brent makes a call to an old friend - the current high school principal - while Jody secretly listens in on another phone. Brent tells his friend that the composite looked exactly like an old town resident named Lora Lee Sherman. This worries them both. Brent sees that Jody was listening and chastises her. Jody asks her mother what it all means but the subject is dismissed quickly. Brent goes out to an old, rickety house in the country - believed to be where Lora Lee Sherman was living the last time anyone saw her. With his gun drawn, he surveys the house but finds nothing.

Jody goes to the library and begins to research Lora Lee Sherman, finding some disturbing newspaper articles here and there. Her mother appears at the library and once again tells Jody to forget about it, but Jody can't. Her mother tells her a well-known story the town of Cherry Falls would like to forget: 25 years ago or so, a strange loner girl at the high school named Lora Lee Sherman was walking home alone one night when four seniors - football players who were popular in town - came out of a car drunk and accosted her. Sherman told authorities all four raped her. The police department made a mockery of the "investigation," as Lora Lee Sherman was an offbeat loner girl whereas the four boys were respected and liked. A charge (or conviction) of rape against them would give the town a nasty black eye. Lora Lee Sherman's complaints fell on deaf ears and she left the city for the rural outskirts, where she was rarely seen or heard from again. Jody's mother reveals that two of the boys who were accused of rape are the current high school principal and Jody's father. Jody's mother swears that Brent is innocent, whether the other boys actually did rape Lora Lee Sherman or not.

Downstairs in that house, Jody awakens and sees her father bloody and tied up. Marliston is busy putting on a wig and makeup to "become" Lora Lee Sherman. Marliston reveals that he is Lora Lee Sherman's illegitimate son, then asks Brent to retell the story of what happened that night 25 years ago. Brent first refuses, with the memories too painful to confront, but quickly changes his mind after Jody is threatened with violence. The full story is that the four boys got out of the car while all of them were drunk - with Brent the most drunk, barely conscious of his surroundings. All the boys but Brent began to harass Lora Lee Sherman; she then called one of the boys "a homo". The three then dragged her out to the woods and raped her. Brent says he was on the ground drunk during the rape, but when the boys were finished, they went back and picked him up so he could have a go. Brent says he was completely drunk, but acknowledges he did indeed rape Lora Lee Sherman, and then tearfully says, "But I knew what I was doing ... God help me ... I knew what I was doing."

Marliston says his mother went "psycho" after the rape was covered up and gave birth to a son (himself) fathered by one of the rapists. As the years went on, Lora Lee Sherman became more and more insane, and started to beat Leonard continuously. By the time Lora Lee was dead, Leonard himself was insane - and planned his revenge by killing all the virgins in town. By frightening virgins, he anticipated a large high school orgy (which is happening at that very moment) which would thereby rob all the wealthy parents of their precious children's virginity (just like his mother lost her virginity under less than ideal circumstances). Marliston tells Brent they have the same eyes, then calls him "Dad."

Marliston is about to torture Jody to death when the doorbell rings. Marliston takes off his wig and answers the door - it's Kenny, who suspects Jody is inside as part of an affair with Marliston. Kenny notices Marliston's uneasiness as well as his lipstick and suspects foul play. After Brent bravely manages to smash a mirror in the basement, Kenny hears the crash, punches Marliston and heads inside. Brent frees himself as Kenny comes downstairs and frees Jody. Marliston then follows with an axe in hand.

Brent battles with Marliston, urging his daughter and Kenny to run but loses his own in the battle. Jody and Kenny flee to the orgy, as all sheriff deputies are outside the house. Jody and Kenny's claims of murder go unnoticed until a deputy is killed by an axe-wielding Marliston. Marliston rushes inside the house into a room where most of the couples are having sex, then screams "Class dismissed!" He begins to take swings at students while people trample each other trying to get out the door in terror. Finally Marliston attacks Jody, who reacts by sending him off a balcony where he falls and is impaled on fence posts. After he comes back to life at the last moment, he got shot by Deputy Sheriff Mina, and is finally killed, ending his killing spree.

At the end of the film we see Jody and her mother heading away from the police station after submitting a distorted version of the truth. As she heads into the car Jody sees a strange, apparently female figure with long black hair who looks just like Lora Lee Sherman. When she looks again the figure is gone and she gets into the car visibly shaken.

The final shot is of the town's large lake becoming blood red. 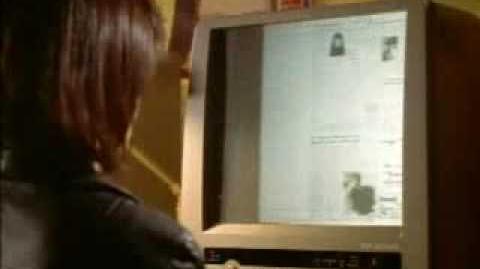