Chewie is a character in the 2009 remake Friday the 13th and best friends with Lawrence. He likes to party with him and has a sense of humour. He also is very hyped and likes to smoke weed.

Chewie and several others are invited by Trent to his summer home near Crystal Lake for a fun filled weekend in 2009. Chewie, who is friends with the bratty Trent, only for the privileges that it entails, accepts. During the trip to the house the group stops at the Outpost convenience store, where Chewie (glad to be out of the back of Trent's cramped van) picks up some snacks and condoms, claiming the latter are for "an experiment" when questioned by Trent. Eventually reaching the Sutton's summer home, Chewie passes the time getting stoned and playing games with Lawrence, Trent and Bree (Nolan, Chelsea and Jenna having gone off on their own). When night falls, Chewie approaches Bree and makes a toast with flaming shot, after some encouragement from Lawrence. However, he ends up embarrassing himself when he burns his lip on the glass, flailing around and accidentally wrecking a chair belonging to Trent's father. Apologizing profusely and claiming he can fix the chair with some tools, Chewie is directed to the tool shed by the seething Trent.

Going to the shed, Chewie mocks Trent the entire way there ("Hi! my name is Trent and my daddy bent me over this chair and beat me, so you have to fix it") and, upon seeing the size of the shed, starts goofing off instead of looking for the tools. Chewie drinks from Mr. Sutton's private beer stock and plays with some sports equipment left lying around. After accidentally breaking a light fixture with a hockey stick, Chewie bumps into Jason Voorhees and, thinking its someone playing a prank, nervously offers him the hockey stick ("It completes your outfit") before being attacked. Knocked around by Jason, the frantic Chewie tries to defend himself with a screwdriver he grabs off the wall. However, Jason turns the screwdriver against him, pushing it into his throat, driving the screwdriver deeper and deeper into his throat. Chewie coughs out an increasing amount of blood, killing him. Afterwards, Jason hangs Chewie's body from the ceiling inside the tool shed. 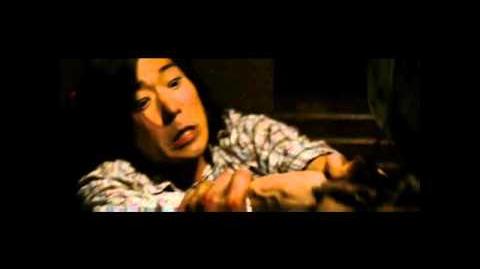 Retrieved from "https://horror.fandom.com/wiki/Chewie?oldid=130115"
Community content is available under CC-BY-SA unless otherwise noted.