Child's Play is a 1988 supernatural action horror film written and directed by Tom Holland, along with Don Mancini and John Lafia. It was released on November 9, 1988 in 1,377 theaters, opening at #1. The film met with moderate success upon its release, and has since developed a cult following among fans of the horror genre.

A single mother gives her son a much sought-after doll for his birthday, only to discover that it is possessed by the soul of a serial killer.

The story begins on November 9, 1988 in Chicago, Illinois. While being chased by Detective Mike Norris, Charles Lee Ray ("Chucky"), the notorious "Lakeshore Strangler", takes cover in a toy store, but is shot and mortally wounded by Norris. Before dying, Charles finds boxes of "Good Guy" dolls, crashing into them. He uses a voodoo ritual to summon Damballa that will transfer his soul into one of the dolls. The store is then struck by lightning, and it burns to the ground. Norris, who survived, finds Charles' dead body and the doll.

Later that morning, Andy Barclay and his mother, Karen are introduced to the audience. It is Andy's sixth birthday and he wants a talking Good Guy doll he has seen in television commercials. However, his mother cannot afford the doll, it being very expensive and she did not find out early enough to save for it, and instead buys various "Good Guys" toys and apparel. Realizing her son's deep disappointment, she later buys a Good Guy from a homeless peddler, the doll purchased being the recipient of the voodoo ritual.

That night, as Andy is playing with the doll (who's revealed himself as Chucky via the talking feature of the doll), Karen's friend Maggie, who is babysitting, instructs Andy to get ready for bed. She hears the television turn on and finds that Chucky is sitting in front of the television, watching the news. Thinking Andy sat the doll in front of the television against her wishes, she scolds Andy. Later that evening, the audience then sees a first-person perspective of a small figure taking a hammer and striking Maggie with it. She falls out of the apartment window, tumbling several stories to her death. The killer's identity (either Andy or Chucky) is left ambiguous. Andy, when questioned over footprints found in the flour on the counter, insists that Chucky was the one who made them. The investigators do not believe his claims, but no one else has shoes in the size or foot patterns. Andy later reveals to his mother that Chucky is alive and that he killed Maggie, noting that Chucky told him "Maggie was a real bitch" and that she "got what she deserved".

The next day, Andy, apparently upon Chucky's request, visits the house of Eddie, Chucky's accomplice who had betrayed him. As Andy urinates outside of the house, Chucky is revealed as being alive. He sneaks into Eddie's house and blows out the pilot light on the stove and turns up the gas; Eddie, in panicked self-defense, fires his gun and the house implodes.

Later authorities place Andy in a psychiatric ward after he is found near the crime scene. Taking the doll home, Karen becomes suspicious of the doll when she picks up the doll's box to throw it away and the batteries fall out. She opens the battery compartment and discovers it is empty; the doll has been talking for the past couple days without any batteries. She demands the doll to talk, but it remains silent. After threatening to throw him into the fireplace, Chucky comes alive in her hands, bites her, and runs out of the apartment. She contacts Mike Norris, who is now investigating Maggie's death. Although he initially doubts her story, the homeless man who sold Karen the doll confirms that he retrieved it from the burnt down toy-store where Charles Lee Ray was killed. Norris becomes a firm believer after he is attacked by Chucky in his car and survives only by shooting the doll.

Chucky later meets with John, his voodoo instructor from years past, and asks why his gunshot wound bled. John, under torture via voodoo doll, informs him that his body is slowly conforming to that of a human's, and that he will soon be trapped in the body if he does not transfer his soul into the body of the first person he revealed himself to, which is Andy. Offhandedly remarking that he will "get to be six years old again", Chucky stabs a voodoo doll and leaves John to die. Karen and Detective Norris, following leads from Charles Lee Ray's case file, find John as he lay dying and receive instructions on how to kill Chucky; although Chucky is a doll, his heart is fully human and vulnerable to fatal injury.

Andy escapes from the psychiatric unit, Chucky brutally kills a doctor in the process. Mike and Karen rush back to the apartment hoping that Andy is there. They confront Chucky in the apartment just as he is preparing to transfer his soul into Andy's body. After a prolonged struggle, Chucky is thrown into the fireplace and as Andy prepares to light him on fire. Chucky says " Andy, we're friends to the end, remember?". Andy replies "This is the end, friend!" and throws the match in the fireplace. Andy and Karen, thinking Chucky is dead, go to help the injured Mike Norris. After Andy gets the first aid kit from under the sink, he discovers Chucky is gone. Chucky chases after Andy and Karen; Karen shoots him several times, missing his heart, but scattering his head an arm and a leg in the hallway. After another police officer arrives, the scattered doll parts attempt to attack at the instructions of Chucky's severed head, but Norris finally shoots Chucky in the heart, killing Charles Lee Ray... for now!

Child's Play was filmed at the following locations:

It is rumored that the "Good Guy Dolls" were based on the My Buddy dolls created by Hasbro. However, during an airing of the movie on the morning of 7 January 2007, AMC claimed the creator modeled the doll after the Cabbage Patch Kids; he was tired of seeing commercials for the dolls. This was confirmed by an interview with the creator, Don Mancini, which was featured on the Seed of Chucky DVD.

Don Mancini has stated that his original script toyed with the audience a bit longer, making them wonder if young Andy was the killer rather than Chucky. The actual film does make the viewer wonder for more than a few minutes, although it grows increasingly obvious that Chucky is the murderer.

Chucky's full name, Charles Lee Ray, is derived from the names of notorious killers Charles Manson, Lee Harvey Oswald, and James Earl Ray. Maggie's death was originally going to be by electrocution while taking a bath. The idea was later used in Bride of Chucky.

It has been adapted in comics a couple of times. Innovation Publishing released a mini-series in the early 1990s. In the Spring of 2007, a comic book series which features Chucky was released by Devil's Due Publishing. The series is written by Brian Pulido, the creator of Evil Ernie and Lady Death.

There are several mistakes in the movie: 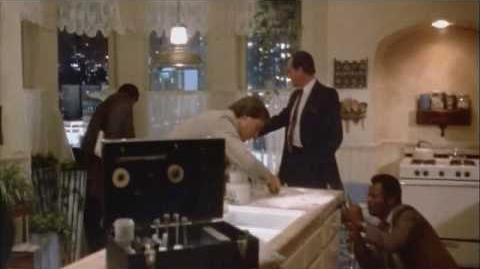 Retrieved from "https://horror.fandom.com/wiki/Child%27s_Play_(1988)?oldid=148588"
Community content is available under CC-BY-SA unless otherwise noted.