Child's Play 2 (also known as Child's Play 2: Chucky's Back) is the 1990 sequel to the 1988 horror film Child's Play, written by Don Mancini and directed by John Lafia. It was released on November 9, 1990, exactly two years after the predecessor. The film uses more comic elements in regards to the Chucky character than its predecessor.

The film received mixed to negative reviews, with a 43% 'Rotten' rating on Rotten Tomatoes. The film was rated "R" by the MPAA.

While Andy's mother is admitted to a psychiatric hospital, the young boy is placed in foster care, and Chucky, determined to claim Andy's soul, is not far behind.

Andy Barclay, now 8 years old, has been placed with a foster family after the events of the first film. Karen Barclay, his mother, has been undergoing psychiatric testing after maintaining that Chucky was, in fact, alive. Detective Mike Norris had been threatened into dismissal and feared humiliation; hence why he did not back her up. In an attempt to save the company's reputation, an executive of the company named Mattson, has the killer doll's body reconstructed. The effort is to prove to the public that nothing was wrong with the line of Good Guy dolls and the Barclays' claims were an isolated incident. The company assumes an employee had tampered with Chucky's voice synthesizer. During Chucky's reconstruction (which is witnessed by Mattson and Mr. Sullivan, the CEO of the company), the soul of serial killer Charles Lee Ray is resurrected unintentionally. One of the technicians is electrocuted (presumably using his "life energy" to bring Chucky back to life). Disgusted by yet another death linked to the Good Guy doll, Mr. Sullivan tells Mattson to "stick it [the doll] up your ass!".

Upon Andy's arrival at the Simpson home, he discovers that there is a Good Guy doll named Tommy in his bedroom closet when it falls from the top shelf. Startling and frightening Andy, his foster mother, Joanne Simpson, immediately removes it from his room.

Another foster child, Kyle, also resides with the Simpson family. She is nearly 18 years old and has grown up in the foster care system. She takes Andy under her wing and mentors him on the trials and tribulations of living in foster homes.

Leaving the toy company that night, Mattson attempts to put Chucky into his trunk. The trunk, being completely full, won't close. As it is raining heavily, he soon gives up and throws Chucky into the backseat of his BMW. The Good Guy Doll executive stops at a liquor store to pick up some vodka for his anniversary. While inside the liquor store, Chucky uses the vehicle's cell phone to call Grace Poole, Andy's social worker. Chucky claims to be Andy's uncle Charles; Ms. Poole informs him that Andy is living with the Simpson family. Chucky then activates the car alarm, forcing Mattson to abruptly depart the liquor store. Chucky uses a toy water pistol and demands Mattson drive him to a parking lot nearby the Simpson home. Chucky uses a jump rope to tie the executive's hands behind the seat and then suffocates him with a plastic bag. During the night, Chucky destroys the Tommy Good Guy doll and buries him underneath the backyard tree swing.

Phil Simpson is concerned that he and his wife are not going to be able to care for Andy. Because of the traumatic murders Andy has witnessed, he may need more emotional support than the Simpsons can provide. They discuss sending him back to the agency. Andy overhears the conversation, and begins carrying Chucky (who he thinks is Tommy) around, presumably in an attempt to gain acceptance and stay with the Simpson family.

Wasting no time, Andy awakes one night to find that Chucky has tied him to his bed. Chucky attempts to transfer his soul into the boy's body. Before he can complete the ritual, he is interrupted by Kyle, who sneaks in the window after a late-night party. Joanne and Phil discover them and assume Kyle had tied Andy up so that he wouldn't tell on her for sneaking out. Andy claims Chucky is alive, but Phil won't listen. Phil angrily throws Chucky into the basement. Which Chucky gets up and finds out he's turning human again by having a nose bleed.

The next day, Chucky hitches a ride on the bottom of the bus and follows Andy to school. At the end of the day, Andy's teacher, Ms. Kettlewell, is looking over papers and sees profanity on Andy's paper that Chucky wrote. Andy sees Chucky on the toy shelf, and gasps. Ms. Kettlewell angrily confronts Andy about his paper. She assumes Andy is going to play with the doll as he stares at it. She locks Chucky in the storage closet and demands that Andy put his head down on his desk. Locking Andy in the classroom, she goes to call the Simpsons. Chucky immediately begins shouting for Andy to let him out of the closet. Andy escapes via the classroom window and runs home. Ms. Kettlewell returns a short time later and finds the classroom empty. Hearing banging coming from the storage closet, she naturally assumes that Andy is hiding in it. While searching the closet for Andy, Chucky pops out from behind a rack of coats stabs Ms. Kettlewell with a ball air pump, and then beating her to death with a yard-stick.

It is now night time at the Simpson home. Andy goes into the basement with an electric knife determined to kill Chucky. Chucky jumps onto Andy's back from behind some hanging laundry and a struggle ensues. Hearing the commotion, Phil is awakened and goes to the basement to investigate. Chucky hides underneath the stairs. Phil begins walking down the stairs and asks Andy to put down the knife. Chucky trips Phil from beneath the stairs and he falls to his death.

The police and Grace Poole arrive. Andy is sent back to the orphanage. Kyle, upset about the evening's events, goes outside to smoke a cigarette on the swing. While swinging, she kicks up some dirt and discovers the Tommy doll buried in a shallow grave. Realizing Andy was telling the truth about Chucky, she goes back into the Simpson house only to discover that Joanne's throat had been slashed. Chucky is hiding under the bed and eventually gets the upper hand, putting a knife to Kyle's cheek.

Chucky forces Kyle to drive him to the orphanage to get Andy. On the way to the orphanage, a policeman pulls Kyle over for speeding. He does not give Kyle a ticket and allows her to go on her way. Frustrated, Chucky demands Kyle drive faster - she complains they will just get pulled over again. Kyle fastens her seatbelt and begins to drive much faster. Suddenly she slams on the brakes and Chucky goes flying through the windshield. Chucky jumps up onto the hood of the car. Kyle steps on the gas and drives into a chain-link fence. Not knowing where the doll is, Kyle cautiously steps out of the car. Chucky jumps onto her back from behind.

Arriving at the orphanage, Chucky pulls the fire alarm. Only Andy, Kyle, Chucky and Grace Poole are left in the building. Ms. Poole is angry and assumes that Kyle pulled the fire alarm. She demands to speak with Kyle and Andy in her office. She grabs Chucky out of Kyle's arms and Chucky proceeds to stab her. The social worker falls onto the copy machine and it begins making photocopies of her bloody and lifeless body. In a quick motion, Chucky locks Kyle outside of the office and threatens Andy with the knife. The two flee the building, hopping into the back of a Chicago Sun Times truck. Kyle pursues them in the Simpson station wagon, eventually forcing the truck off the road. The driver grabs her in a confrontation as she sees Andy and Chucky running into the nearby Good Guy doll factory. Kyle runs after Andy and Chucky.

Now inside the Good Guy doll factory, Chucky starts the ritual to transfer himself out of the doll and into Andy's body.  However, as Chucky's voodoo instructor warned in the previous film, Chucky has remained in his doll form for too long and, as a result, the ritual fails. Chucky's nose begins to bleed, implying that he will be trapped inside the doll forever - which sends Chucky into a rage. Kyle knocks a stack of Good Guy doll boxes onto Chucky, temporarily disabling him. Kyle and Andy attempt to find a way out of the virtual maze of Good Guy doll boxes with Chucky in pursuit. Kyle and Andy finally find a conveyor belt where completed Good Guy dolls are being sent down. They begin climbing up it. Andy slips and slides half-way down the roller-bar conveyor belt - only to see Chucky spring up with a knife. Andy desperately begins climbing, and when he reaches the top, Kyle closes the gate at the belt's end right onto Chucky's hand. Chucky is forced to rip off his own hand. He then replaces it with the blade of his knife.

Because of the pile-up of Good Guy dolls on the conveyor belt, an alarm sounds in the factory control room. The lone technician on duty goes to investigate. Rectifying the problem, he turns around to head back to the control room. Chucky appears and knocks the technician down onto the conveyer belt.  A machine on the assembly line locks onto the technician's head and a mechanism lowers down, replacing his eyes.

Kyle and Andy, still struggling to find a way out of the factory, are standing in front of yet a different conveyor belt. Suddenly, Chucky appears behind them on a doll stand. He nearly stabs Andy in the head, but Kyle shouts "duck" and throws a tray of tools at Chucky. A sewing machine that attaches doll hair begins sewing Chucky to the doll stand, trapping him. Andy then reverses the conveyor belt, sending Chucky into a machine that attaches doll limbs. After a few moments, the conveyor belts begin to move forward. Andy and Kyle see a mass of melted plastic and blood. Assuming that Chucky is finally dead, Kyle and Andy begin to exit the factory. Chucky has rigged the body of the factory technician he killed earlier with rope, and uses it to knock Kyle unconscious. Chucky has cut off his own legs off to escape from the limb attachment machine.

Chucky inadvertently traps himself directly beneath a valve for a large cauldron of liquefied plastic. Andy pours the molten plastic all over Chucky, seemingly killing him this time. Andy rescues the unconscious Kyle from the conveyor belt and the two take one last look at the mess where Chucky had been. Suddenly Chucky springs up and makes one last try for Andy. Kyle grabs an air hose that Chucky had severed a few moments earlier and shoves it into Chucky's mouth, which causes Chucky's head to inflate and eventually explode. As a new day dawns, Andy and Kyle are seen walking out of the factory, uncertain of what their futures' will hold.

A different ending is shown during the USA Network airing version than the one in the theatrical release. After Andy and Kyle come out of the factory, we are taken back intside, and shown pieces of Chucky, most notably his eye stirring into the vat of plastic, then a new head is made (without hair or eyes), the head makes an evil grin, devouring the camera, then the credits roll. 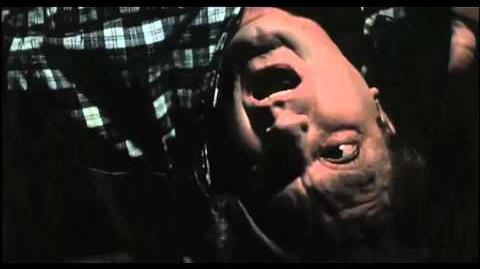 Retrieved from "https://horror.fandom.com/wiki/Child%27s_Play_2_(1990)?oldid=129617"
Community content is available under CC-BY-SA unless otherwise noted.