This page needs improvement. It can be improved by: pictures, quote

Child's Play 3 is a 1991 horror comedy film directed by Jack Bender. It is the third part of the Child's Play franchise, followed by the Bride of Chucky.

Chucky returns for revenge against Andy, the young boy who defeated him, and now a teenager living in a military academy.

The film begins with the factory from the conclusion of Child's Play 2, now abandoned and covered in cobwebs beginning to be cleaned up for renovation. When a pneumatic claw pulls the melted mass of plastic that was formerly the killer doll Chucky blood that was trapped inside bleeds out into a vat of new plastic, magically allowing Chucky to reform as a new doll, bringing him back to life with a feral scream of pain. It's revealed to be eight years since the events of the last film and the Good Guys Doll Company returns the iconic doll line into production despite protests that it may reignite the controversy that surrounded young Andy Barclay as detailed in the last two films. Given to CEO of Good Guy Doll Company, President Sullivan as a model of their new line up of dolls, Chucky hides in the mans luxurious toy-decorated apartment and attacks him while he's relaxing. Tripping the executive with a jar of marbles, Chucky then throws two darts into him, in the leg and then in the lower back causing Sullivan's legs to give out. Chuck then strangles the man to death (a reference to his previous life as the Lakeshore Strangler) saying "Nothing like a strangulation to get the circulation flowing". Looking up Andy on the dead executive's computer Chucky discovers that the boy never completely recovered from his attacks and as a last resort the foster care system sent him to Kent Military School to straighten him out. Chucky then plans his revenge...

Andy meanwhile is interviewed by the head of Kent, Colonel Cochran, who informs Andy of his intentions of straightening him out and making him a man. Andy is then sent to the vicious camp barber Sgt. Botnick who clips Andy's long hair down to a crisp crew cut. It's there he meets Ronald Tyler, one of the youngest members of Kent School and learns about the returned production of Good Guy Dolls that causes him considerable distress. He later meets his roommate Whitehurst (Dean Jacobson) stuffed in a closet and tied up. Whitehurst, who is a bit of a nerd, has managed to raise the ire of short-tempered jock and camp commanding officer Cadet Lt. Col Brett C. Shelton (Travis Fine) who has taken it upon himself to make the cadet's lives a living hell. The only person in the school who can stand up to Shelton is Kristen De Silva (Perrey Reeves), an attractive young female cadet. Andy automatically takes a liking to her and the feeling appears to be mutual.

Later, a large package arrives for Andy and the mail officer askes Ronald to take it to him. On the way the paper on the package gets damaged, revealing Chucky's good guy doll packaging much to Ronald's delight. Still very much a child and enamored by the Good Guy dolls Ronald decides to keep the package, and in the armory opens it much to Chucky's frustration who bursts out and yells at Ronald. After some initial anger, Chucky realizes that he no longer needs Andy as Ronald isn't afraid of him and could provide just as good of a body as his nemesis. He tells Ronald they're going to play a game called 'hide the soul' and begins to chant the voodoo ritual to send his spirit into Ronald's body. However, he is interrupted by Colonel Cochran who expresses disappointment in Ronald for playing with dolls, taking Chucky and throwing him in a dumpster moments before it is loaded into the back of a garbage truck.

Chucky, not wanting to be crushed by the trucks trash compressor starts yelling and making a racket in the back of the vehicle, making the well meaning driver believe that someone was trapped in the rear. Jumping into the trash bed to rescue whoever was yelling Chucky made his escape, turning on the compressor before leaving, crushing the poor driver to death with his own vehicle. Hearing the driver's death screams Andy and his fellow cadets find the grisly bloodstains on the sides of the truck, making Andy wonder if his old tormentor has returned from the dead to haunt him.

Later that night his fears are confirmed when Chucky attacks him in his room, slashing the back of his ankle with a knife, and taunting him with his plans to take over Ronald's body. Andy defends himself and tries to kill the doll but is interrupted by Shelton who takes the doll for his kid sister's birthday present. Realizing he has to protect young Ronald, Andy vows to face his fears and kill the doll once and for all. However after sneaking into Shelton's room and trying to find Chucky he accidentally wakes the short-tempered commanding officer who seeing that his doll is missing accuses Andy for stealing it back from him. When Andy denies it Shelton makes the whole squad do excersizes in the rain, leaving Chucky to stalk the halls looking for Ronald.

Once again Chucky tries to preform the voodoo spell on Ronald in Colonel Cochran's office but is once again stopped by an unaware De Silva and Ivers who have snuck into Colonel Cochran's office after curfew so De Silva can find out more about Andy by reading his file. De Silva and Ivers sneaking into the office inadvertently saved Tyler and prevented Chucky from transferring his soul into Tyler's body. When Colonel Cochran returns later Chucky tries to vent his rage into killing the older man but before he can stab him to death the sight of the psychotic doll brandishing a bowie knife causes him to have a heart attack much to Chucky's chagrin.

Meanwhile, Chucky goes on a killing spree, crushing a garbage man in the back of his own garbage truck, slashing the sadistic barber Sgt. Botnick's throat (a cameo by Andrew Robinson), and giving the uncaring Colonel Cochran a heart-attack (much to Chucky's surprise), before finally making his move on Tyler. During a military exercise Chucky replaces the paint ball ammunition with live rounds, so that when the two teams of students meet, they actually begin fatally shooting each other by accident. Shelton is killed with one of the rifles, unknowingly a real bullet. Shelton's assistant, Major Ellis (Matthew Walker), angrily blames Andy for being a sick, murderous prankster who caused his companion's death. Ellis attacks Andy, with his new girlfriend Kristin De Silva telling him Andy is innocent and trying to separate them. After Chucky attempts to kill the distracted groups with a grenade, Andy's friend Whitehurst, judged as not being a man and being a geek, sacrifices himself by jumping onto the grenade, saving the students from a grisly death. Tyler, out of panic, flees to the woods and makes for a carnival that is taking place not far from the academy. Andy, with De Silva, confront Chucky (now armed with a security guard's spare handgun) inside a horror themed fun house where he knocks Tyler unconscious to try to steal his soul.

As usual for the series, Chucky's death comes by a series of things. His face is partially sliced off by a scythe swung by a statue of the Grim Reaper. Then one arm is blown off by Andy's revolver, (which Andy took off of a dead security guard that Chucky killed). Then he's shot in the chest. Finally, as Andy and Chucky struggle atop a great pile of foam skulls, Tyler hands Andy his pocket knife (that Andy gave back earlier so that Tyler would have protection from Chucky), cuts his other hand off, therefore Chucky won't have any way of holding onto Andy and gets flipped over into a giant fan, which dices him into numerous pieces, eventually killing him. Afterwards, Andy goes with the police to give his story, while the police take Chucky's decapitated body parts to the police station, where it will be impounded as evidence as we'll see in Bride of Chucky.

Child's Play 3 was involved in a controversy involving the brutal United Kingdom murder of English toddler James Bulger, which was allegated to have inspired the killing. However, the evidence has since proven insubstantial after police investigation. 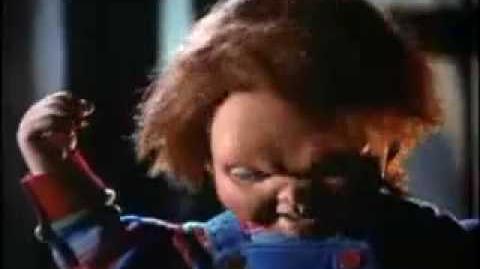