This page needs improvement. It can be improved by: pictures, information/trivia, complete list of deaths, quote

Children of the Corn V: Fields of Terror

As a teenage girl comes to Gatlin to find her biological mother, the town's infamous cult plots a comeback as their leader, Isaac, awakens from a coma.

After Hannah leaves the hospital and begins back on road, she is nearly driven off the road by a mysterious truck. After swaying off onto a small dirt road and pulling into a strange motel, she finds a dead crow and a strange smiling child. At the motel, she meets a pair romantically involved teenagers, a girl and her boyfriend, Matt. They then check into the motel.Hannah, the first child born of the original Gatlin corn cult, visits the town of Gatlin to find her real mother. On the way she picks up a street preacher by the name of Zachariah, who tells her about her name, then vanishes. After crashing into the corn, Hannah is taken into town by a police officer. Once there, she finds out Isaac was not killed by "He Who Walks Behind The Rows," but instead went into a coma. The hospital appears to be filled with strange patients. They talk of a prophecy involving Hannah and Isaac before the scene changes.

The next morning, as Hannah is leaving the motel, a small crowd gathers around her car, fascinated about her. Meanwhile, the scene changes and we see Isaac has awakened from his long 19 year sleep (in which He Who Walks Behind the Rows left him in at the end of the first film), and that he has a son.

Hannah returns to the hospital, where she begins having visions in the empty hallway, before Gabriel appears behind her. He shows her to the record room so she can look for her birth certificate. While they are in there in the dark, she is almost killed when Jake tried to split her head open with an axe. Gabriel leaves Hannah alone to take Jake back to his room, while left alone Hannah finds a scythe pinning what she thinks is her birth certificate into the wall.

In the middle of the night, a strange woman tries to touch Hannah while she is lying in bed, but leaves once she realizes Hannah is awake. Hannah recognizes her truck as the one that drove her off the road. She follows the truck till dawn into the middle of a field, but before she can follow the person she runs into Jesse, another strange teenager carrying a large blade. He tells her the owner of the truck is Rachel Colby, the same name on the birth certificate.

In her motel room, Hannah finds "GET OUT OR DIE!" written in what seems to be blood.

Back at the church, Rachel confronts Isaac. It is revealed that Rachel is the wife of Amos (Children of the Corn) and she believes her daughter to be dead. When she leaves, Isaac tells how she will be punished for her betrayal.

Rachel later talks with Dr. Michaels, who just wants to move on beyond the ideas of cults and sacrifices. He tells Rachel to do whatever she needs to do to try to stop Isaac.

When Dr. Michaels comes back to the hospital, he finds Jake has clogged the sink and caused water to go all over the floor, and is now muttering mindlessly on his knees. Isaac steps out of the shadows, displaying supernatural power. Michaels stands, unafraid of him, warning him to leave Hannah alone, exposing himself as the one who took Hannah away from the town. Isaac pulls a sparking electric cord from the wall and drops it on the wet floor, electrocuting Michaels.

Later, Isaac approaches the son, who is revealed to be Matt. He is proud in the belief that his son will carry on his legacy. Matt, though, seems less than enthusiastic.

While Gabriel talks with Isaac in the cornfield, Hannah is meanwhile driven off the road again, this time by a drunken Matt. After she yells at him, he hands her a shovel and tells her he is a descendant of Isaac, and for her to trace her lineage.

Hannah begins digging up the grave of Baby Colby, Rachel's apparently dead child. As she digs, the bloody dead body falls right above her head hanging from a tree; however, this turns out to be only an illusion. Rachel is in the graveyard with her, and warns her that there's no going back if she continues. Hannah then says she'll only leave if Rachel tells her the truth. Rachel denies her this, calling it repulsive. As Hannah prepares to open the casket, a desperate Rachel tells her the prophecy: "The firstborn daughter of the children will return on the eve of her nineteenth birthday to find out who she is, and He-Who-Walks-Behind-The-Rows will awaken."

Hannah opens the casket, to see it is empty, and Rachel knew Hannah was her child and wasn't dead. She tells a hurt Hannah, that Isaac wants Hannah to make a new 'pure' race. Hannah accuses her of insanity and runs away.

In the cornfields all of the cult has gathered and celebrate, as Matt is branded as the first of the chosen.

While Hannah is walking through the cornfields that night, she is surrounded by children, one of whom injects her with a sedative. Hannah wakes up surrounded by the cult members and a blazing bonfire. They place a crown of corn husks on her head and brand her hand like they did Matt. They begin to perform a union ceremony between her and Matt, but Hannah escapes. They try to catch her, activating the irrigation system and driving motorcycles through the fields. Rachel appears before the cult members, claiming Isaac is a fraud. In the fields, Matt's girlfriend attempts to help Hannah escape, because she wants to be with Matt. They are soon cornered by the cult members, who capture them. It turns out that Gabriel was on the bike Hannah was put on, and takes her out of the cornfields. Matt's girlfriend, though, isn't so lucky, and Isaac orders Matt to kill her. Matt refuses, so Isaac, cursing his son, intends to kill her himself, splitting her in half with Jesse's blade. With that, Matt runs into the cornfield. Gabriel cares for Hannah in a barn, tending her wounds and helps her bathe, and in the barn he kisses her. They begin to partake in sexual intercourse at the exact moment the clock strikes twelve. Matt then soon appears in the barn and Hannah asks about her mother, and after not receiving any answer leaves to look for her. While in the barn Gabriel shows Matt his collection of all of the farming tools of the original children, and promises that Matt will be with his girlfriend. He leaves the barn with Hannah, and Matt impales himself on a scythe. In the hospital, Rachel is being held in the basement, and Hannah is being led to her by visions of her being beaten by Cora. In the hallway she meets Jake, who warns her of "a false prophet, sheep’s clothing, raving wolves!", while Gabriel kills Jesse with some sort of supernatural power. Hannah now confronts Isaac, who now believes ‘‘he to be 'He-Who-Walks-Behind-The-Rows', and has gone mad with power. Gabriel storms down the halls of the hospital, and when Cora tries to shoot him, with a flick of his wrist and the word 'bang' has her kill herself. He then confronts Isaac, and exposes that he was the firstborn child of the children and that Isaac denied him his birthright in favor of his own son. He tells Hannah to kill Isaac, but listening to her mother, Hannah does not. Gabriel goes on to explain how everything that has happened has gone according to his plan. He then levitates Isaac with his power, and reveals himself to be 'He-Who-Walks-Behind-The-Rows". Restraining Isaac to the ground, and stabs him with the broken end of a broom handle. Rachel stabs Gabriel, and together they flee from the hospital. Gabriel though is healed almost instantly and begins to set off explosions.

Rachel and Hannah are then seen walking down the road, with Hannah now pregnant with the child of 'He-Who-Walks-Behind-The-Rows'. 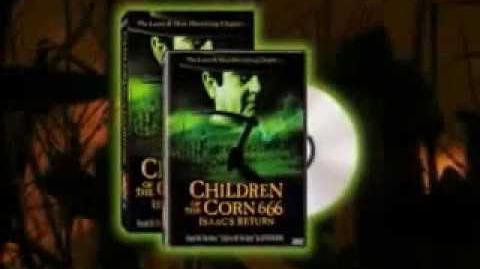 Retrieved from "https://horror.fandom.com/wiki/Children_of_the_Corn_666:_Isaac%27s_Return_(1999)?oldid=133031"
Community content is available under CC-BY-SA unless otherwise noted.