This page needs improvement. It can be improved by: pictures, information/trivia, quote

Christine is a horror film from 1983 directed by John Carpenter. It is based on the novel of the same name by Stephen King.

A nerdish boy buys a strange car with an evil mind of its own and his nature starts to change to reflect it.

Warning: this text contains details about the plot/ending of the film.
Arnold "Arnie" Cunningham is an awkward, unpopular teen with only one friend, Dennis Guilder. Arnie's life begins to change when he buys a used, badly battered red-and-white 1958 Plymouth Fury, named "Christine," in need of extensive repairs. Arnie begins to restore Christine at a local repair shop and junkyard, Darnell's Autobody, but as he spends more of his time working on the car, he discards his glasses, dresses more like a 1950s greaser and develops an arrogant personality. Arnie's new girlfriend, Leigh Cabot, and Dennis discover the car's previous owner was obsessed with Christine and committed suicide in it by carbon monoxide poisoning.

A group of bullies at school--angry with Arnie after a shop class confrontation results in the lead bully, Buddy Repperton, being expelled--vandalize Christine. Arnie's devastated and determined to repair Christine. As he examines the ruined car, he hears the creaking of metal and notices the engine is now fully restored. Arnie tells the car, "Show me." Christine flips on its lights and restores itself to showroom quality, then, driving itself, seeks out the vandals. Moochie Wells is targeted first and crushed to death in an alley. Buddy, Richie Trelawney and Don Vandenberg are then killed: Richie and Don are caught in a gas station explosion (which sets Christine on fire); and Buddy is run over and burned by the flaming car. Darnell, owner of the garage and junkyard where Arnie restored and keeps his Plymouth Fury, is killed in the garage when he sits in the car and is crushed by the seat adjuster after he saw the burned Christine drive itself into its parking stall.

On New Year's Eve, Dennis and Leigh reason that the only way to stop Christine and save Arnie is to destroy the car. Dennis scratches "Darnell's Tonight"--referencing the name of the junkyard--into Christine's hood, then makes his way there with Leigh. Dennis waits in a bulldozer while Leigh heads to the office so that she can shut the door after Christine arrives, trapping the car. Christine, who has been lying in wait the entire time, shines the headlights from under a pile of trash and the car charges after Leigh. Christine crashes into Darnell's office in an attempt to kill Leigh, and Arnie (revealed to have been driving the car himself) is thrown through Christine's windshield. He is impaled on a shard of glass and dies, reaching out to touch Christine one last time. Christine continues to attack Dennis and Leigh, repeatedly sustaining damage and regenerating. Dennis pulls Leigh into the cab of the bulldozer; the two then smash Christine, driving back and forth over the car with the bulldozer as it mocks them by playing "Rock and Roll is Here To Stay" over the radio until at last it is too shredded to regenerate again.

Dennis, Leigh and Junkins all manage to survive and leave behind the remains of the car--Junkins points out that even if they weren't able to save Arnie, they at least managed to stop Christine before she could harm anyone else. The closing shot of the film is of Christine, now having been crushed into a cube by a car crusher, as a piece of the grille slowly begins to straighten. 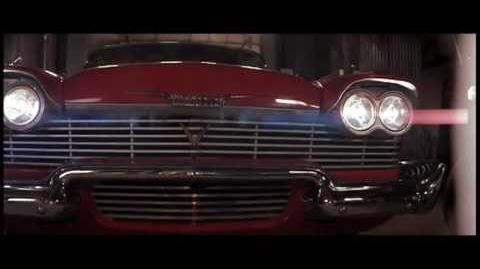 Retrieved from "https://horror.fandom.com/wiki/Christine_(1983)?oldid=135688"
Community content is available under CC-BY-SA unless otherwise noted.