Clownhouse is a 1989 American horror film written and directed by Victor Salva. It was nominated for the Grand Jury Prize in the dramatic category at the 1989 Sundance film festival. Clownhouse was the film debut of actor Sam Rockwell.

Just before Halloween, three young brothers alone in a big house are menaced by three escaped mental patients who have murdered some traveling circus clowns and taken their identities.

Warning: this text contains details about the plot/ending of the film.
The story follows Casey, a normal boy whose life is constantly influenced by his intense fear of clowns. His two older brothers, Geoffrey and Randy, are mostly disobliging. One night, the three boys are left alone when their mother visits relatives, so they decide to visit a local circus for a night of amusement, despite Casey's uncontrollable coulrophobia. Meanwhile, the local state insane asylum has sent a majority of the hospital's inmates to the carnival for therapy, but three psychotic mental patients break away from the group and kill three clowns, taking their makeup and costumes. While at the circus, Casey innocently visits a fortune teller despite Randy's better judgment. The fortune teller reveals to Casey that his life line has been cut short, and says to him:

"Beware, beware, in the darkest of dark

Though the flesh is young and the hearts are strong

When darkest death has left its mark."

As the boys go home from the circus, a shaken Casey thinks his nightmare is over, but it has only just begun. The three patients move from house to house, sadistically killing their residents while mimicking their dying motions with clownlike jest. When the clowns target their home, Casey is forced to face his fears once and for all. Casey and his brothers are locked inside their isolated farmhouse and the power is turned off. Casey attempts to call the police, but because Casey says that the "clowns from the circus are trying to get him", the police officers assume that Casey's fear of clowns caused him to have a realistic nightmare. The officers tell Casey that everything will be fine if he goes back to sleep, and hang up. The three boys are forced to band together in a desperate fight for survival during a deadly game of cat and mouse where they try to outwit the killers, who are stalking them around the property. Randy mockingly dresses up as a clown, disbelieving of Casey's claims that clowns are inside the house, and he scares Casey with his costume before being captured and stabbed to death by one of the clowns.

Casey manages to kill the first clown by pushing him down a flight of stairs and breaking his neck. Later on, after tricking the clown, Casey and Geoffrey push another clown out a window to his death. And Geoffrey being attacked and presumably killed by the final clown, who chases Casey into the upstairs game room. Casey manages to hide for the time being, but after the clown leaves, Casey accidentally steps on a noisemaking toy, alerting the clown of his presence. The enraged clown attempts to strangle Casey to death, but he is then killed by Geoffrey, who survived the clown's attack, buries a Fire axe in the killer's back, and the two exhausted and traumatized brothers hug each other as the police finally arrive to help them.

The film ends with this narraration:

"No man can hide from his fears; as they are a part of him, they will always know where he is hiding."

In 1988 Salva was charged with the sexual abuse of Nathan Forrest Winters, the lead actor who played Casey, during the making of this film. Salva served 15 months of a 3 year prison term and was released on parole. Winters came forward again in 1996, when Salva's film Powder was released. 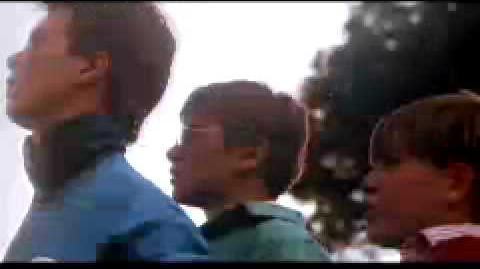 Retrieved from "https://horror.fandom.com/wiki/Clownhouse_(1989)?oldid=129878"
Community content is available under CC-BY-SA unless otherwise noted.