Nosferatu,
Nosferatu - Phantom Of The Night

Count Orlok is in fact one of the first representations of the legendary vampire Count Dracula. This fiend appeared in the classic chiller Nosferatu (1922) and the Werner Herzog remake Nosferatu - Phantom Of The Night (1979).

In the original Nosferatu, the menacing Count Orlok was the film's most stunning creation. He was portrayed by the suitably named Max Schreck (in German meaning "Maximum Terror"), who played the character as a walking corpse-like figure. The bat-like pointed ears and teeth remain the monster's most notable features, while his claw-like fingers were almost as memorable.

To this day, the creepy Count Orlok remains among the most influential of all classic movie monsters. His skinned-bat look was copied by director Tobe Hooper for the character of Kurt Barlow in the 1979 TV version of Salem's Lot and by Neil Marshall, for the cannibal mutants in the The Descent (2005). And the influence does not end there: Francis Ford Coppola lifted chunks from the film for his notable 1992 chiller Bram Stoker's Dracula and E. Elias Merhige made Shadow Of The Vampire (2000) to showcase the brilliance of this astonishing character. 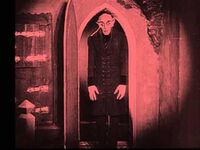 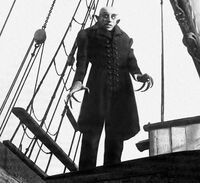 Add a photo to this gallery
Retrieved from "https://horror.fandom.com/wiki/Count_Orlok?oldid=143910"
Community content is available under CC-BY-SA unless otherwise noted.