An anthology which tells five terrifying tales based on the E.C. horror comic books of the 1950s.

A young boy named Billy gets yelled at and slapped by his father, Stan, for reading a horror comic titled Creepshow instead of doing his chores. His father tosses the comic in the garbage to teach Billy a lesson, but not before threatening to spank him should Billy ever get caught reading Creepshow comic books again. Stan also refers it as "such horror crap". Later after he tosses the comic book away, Stan reminds his wife that he had to be hard on Billy because he can't believe all the 'crap' that's in the book. He closes out the discussion with the reason why God made fathers: to protect their ways of life and their children. As Billy sits upstairs hating his father, he hears a sound at the window, which turns out to be a ghostly apparition, beckoning him to come closer.

(First story, written by King expressly for the film)

Third Sunday of June, seven years ago, an elderly despicable patriarch named Nathan Grantham was killed on Father's Day when his daughter Bedelia (Viveca Lindfors) bashed him in the head with a marble ashtray as he screamed for his cake. Third Sunday of June, seven years later, his ungrateful, money grubbing relatives get together for their annual dinner on Father's Day. Nathan Grantham comes back as a zombie-like creature to get the cake he never got, and kills off his relatives one by one.

A dimwitted backwoods hick thinks a newly discovered meteorite will provide enough money from the local college to pay off his $200 bank loan. Instead, he finds himself being overcome by a rapidly spreading plant-like organism that comes off the meteorite. Stephen King himself plays the doomed protagonist in this darkly humorous story.

Something to Tide You Over Edit

(Third story, written by King expressly for the film)

Richard Vickers, a coldblooded, wealthy husband, stages a terrible fate for his unfaithful wife, Becky (Gaylen Ross) and her lover, Harry Wentworth (Ted Danson) by burying them up to their necks on the beach, below the high tide line. They drown, but the tide somehow revives them as waterlogged zombies intent on getting revenge of their own.

A mysterious, extremely lethal creature is unwittingly released from its crate in this suspenseful and gory monster story. Hal Holbrook stars as pacifistic college professor Henry Northrup, who sees the creature as a way to rid himself of his drunk, emotionally abusive wife, Wilma. (The monster in the crate was nicknamed "Fluffy" by the film's director, George A. Romero.)

They're Creeping Up On You! Edit

(Fifth and final story, written by King expressly for the film)

Upson Pratt is a cruel, ruthless businessman whose Mysophobia has him living in a hermetically sealed apartment, but finds himself helpless when Mr. White, his put-upon employee, allows his apartment to be overrun by endless hordes of cockroaches.

The following morning, two garbage collectors (one played by special effects makeup artist Tom Savini) find the Creepshow comic in the trash. They look at the ads in the book for X-ray specs, a Charles Atlas bodybuilding course, and a voodoo doll, whose coupon is missing. Inside the house, Billy's angry father complains of neck pain, which escalates to deadly levels as we see Billy jabbing the voodoo doll over and over.

Something to Tide You Over Edit

They're Creeping Up On You! Edit

Creepshow was given a wide release by Warner Bros. on November 12, 1982. It started strongly with an $8 million box-office gross for its first five days. In its opening weekend, Creepshow grossed $5,870,889, ranking #1 in the box office, capsizing First Blood from the top spot. In total it grossed $21,028,755 domestically, making it the highest grossing horror film for the Warner Bros. studio that year.

The film was first released in 1983 on VHS and CED Videodisc.

A 2 disc Special Edition DVD of Creepshow was released 22 October 2007 in the UK. The discs feature a brand new widescreen transfer of the film sourced from the original master, a making-of documentary running 90 minutes (titled Just Desserts: The Making of Creepshow), behind-the-scenes footage, rare deleted scenes, galleries, a commentary track with director George A. Romero and make-up effects artist, Tom Savini, and more. Owner of Red Shirt Pictures, Michael Felsher is responsible for the special edition, the documentary and audio commentary in particular.

In the United States Warner Bros. sticks to a one-disc set with only the film's trailer. No other special features have ever been released with the Region 1 version. The Region 1 DVD was a 2-sided disc. One side was the 1:85 transfer (widescreen) version of the film, and the other side was the full screen version.

On September 8, 2009, the film was released on Blu-ray. Again the only special feature is the film's trailer.

Second Sight acquired the license to release a new Blu-ray in the U.K., It contains all of the special features included from the special 2 disc edition which was released in 2007. It also contains a new audio commentary with Director of Photography Michael Gornick, Actor John Amplas, Property Master Bruce Alan Green and make-up effects assistant Darryl Ferruci. To be released October 28. 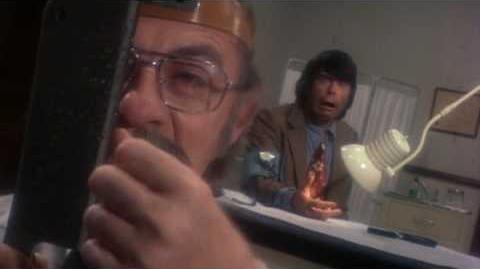 Retrieved from "https://horror.fandom.com/wiki/Creepshow_(1982)?oldid=138833"
Community content is available under CC-BY-SA unless otherwise noted.