This page needs improvement. It can be improved by: quote, list of deaths

A group of small, furry aliens makes lunch out of the locals in a farming town.

Warning: this text contains details about the plot/ending of the film.
The film begins on a prison asteroid in outer space. A group of unseen creatures known as the Critters are set to be transported to another station. When the seemingly intelligent creatures hijack a ship away from the station, the leader of the station hires two transforming bounty hunters to hunt the Critters down.

Meanwhile on the Earth we are introduced to the Brown family, living in a rural Kansas town: the father, Jay; the mother, Helen; the teenage daughter, April; and the trouble-making son, Brad. Brad often hangs out with dopey mechanic, Charlie. When he and Brad are outside, Charlie accidentally hits Brad's sister with a slingshot pellet and Brad, not wanting his friend to get into trouble, passes the blame on himself. He is grounded, but sneaks out onto the roof and takes a seat in a tree. In the tree he sees a comet streaking the sky that falls somewhere in the distance, making a loud crash prompting Jay to run outside. He is surprised yet not necessarily angry to find his son in the tree, who says he was blown outside by the explosion. Jay, obviously not believing this, takes his son along with him to find the comet.

At the crash site, we see that the comet was actually the Critters' ship. Subtitled, we see that the creatures want food. Shortly afterward the Critters make their way towards the farm and manage to cut the power. Jay, Helen, and Brad go to the circuit breaker where Jay is attacked by one of the Critters. The family manages to evade the Critters and get into the house. Meanwhile the two bounty hunters, already landed on the Earth, travel from pillar to post in the town looking for the Critters.

When Brad goes for help he manages to bring the bounty hunters to his home. After their arrival the Critters flee back to their ship but manage to kidnap April. Brad rescues April from the ship and he and Charlie manage to get a large custom-made firecracker in through the ship's door, shortly after the Critters blast the Brown's house into pieces their ship explodes supposedly killing all the critters. The following morning the bounty hunters leave in their ship after giving Brad a strange remote-like device. The bounty hunters manage to repair the Brown's house in less than a minute with the device and fly off, afterward the camera pans toward the barn where green eggs can be visible implying there will be a sequel.

The film was released theatrically in the United States by New Line Cinema in April 1986. It turned out to be a modest hit for the company, grossing $13,167,232 at the box office.

The film was released on VHS and laserdisc by RCA/Columbia Pictures Home Video the same year. In September 1997, New Line Home Video re-released the film on VHS.

In 2003, New Line Home Entertainment released the film on DVD. The film was re-released in a set containing all 4 Critters films on DVD by Warner Bros. in 2010.

In December 2011. It was announced a retrospective, never before seen documentary for the first film is currently in pre-production. The documentary will explore the origins of "Critters" as well as cast & crew interviews and more.

According to Rotten Tomatoes, 57% of reviewers gave the film a positive review. 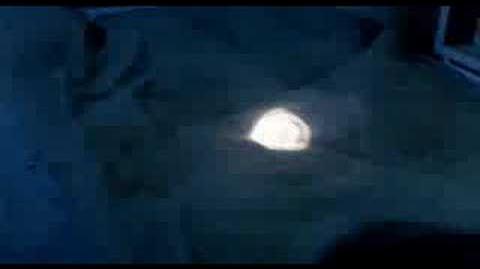 Retrieved from "https://horror.fandom.com/wiki/Critters_(1986)?oldid=141715"
Community content is available under CC-BY-SA unless otherwise noted.