This page needs improvement. It can be improved by: list of deaths, quote

Cujo is a 1983 American horror/thriller film based on the Stephen King novel of the same name. The title refers to the name of the Camber family dog. Cujo was bitten by a rabid bat and turned wild and feral terrorizing the family.

Cujo, a friendly St. Bernard, contracts rabies and conducts a reign of terror on a small American town.

The Trentons – Vic, Donna and their son Tad – are a normal suburban family. Vic works in advertising, Donna is a housewife and Tad is a sensitive little boy who has a fear of monsters in his closet. One day, the Trenton family takes their car to the rural home of abusive mechanic Joe Camber for some repairs, where they meet Cujo – the Camber family's easy-going St. Bernard who has a bite on his nose that Donna notices but thinks little of it. Vic and Donna's marriage on the rocks is tested when Vic learns that Donna has been having an affair with her ex-boyfriend, Steve Kemp, while Vic's advertising for cereal is falling and he is trying to save his marriage.

After Charity and her son, Brett, leave for a week to visit her sister, Cujo's bite from a rabid bat, drives him mad, and he kills the abusive Joe and his alcoholic neighbor, Gary Pervier. Vic goes out of town on a business trip. Donna and Tad return to the Cambers' house for more car repairs and Cujo attacks them. Donna and Tad take shelter in their Ford Pinto, but the alternator dies and the two are trapped. Therefore, they are forced to stay inside their car while Cujo attacks repeatedly. The hot sun makes conditions nearly unbearable and Donna knows that she must do something before they both die from heatstroke or dehydration. Attempts at escape, however, are foiled by the mad Cujo's repeated attacks. Donna decides that she must risk leaving the car, but Cujo bites her on the leg and forces her back inside. Eventually, the badly wounded Donna makes another desperate escape attempt but is again attacked and must return to the car. Vic arrives home to rekindle his marriage but finds out Donna and Tad are missing. He suspects the possessive Steve Kemp of kidnapping but then realizes his wife and son might be at the Camber's residence. The local Sheriff comes to the house for a brief standoff, before Cujo kills him.

Meanwhile, Donna takes advantage of a momentary distraction and hits Cujo with a baseball bat until it breaks off, leaving only a jagged handle. Cujo jumps at her and is impaled by the broken bat. Donna then breaks the back window of the Pinto with the sheriff's revolver and retrieves Tad, as Cujo broke all of the door handles. As Donna revives the dehydrated and over-heated Tad in the house, a recovered Cujo breaks through the kitchen window and tries to kill them, but Donna kills him with the Sheriff's pistol. Vic arrives and is reunited with Donna and Tad and the marriage is saved.

The original director was Peter Medak, who left the project two days into filming, along with his DOP Tony Richardson. They were replaced by Lewis Teague and Jan de Bont respectively.

Reviews of the film were mixed, and a more recent collation of reviews on Rotten Tomatoes has earned Cujo a "rotten" rating of 59% based on 29 reviews. Eleanor Mannikka of the New York Times wrote that: Cujo is not as menacing or frightening as other film adaptations of King's popular stories and especially can not compare to the 1976 Carrie...His condition deteriorates as he attacks people again and again until finally, mom Donna Trenton and her son Tad are trapped inside the family car with Cujo lurking nearby, set to kill them any way he can. A showdown is inevitable but is just as predictable as the rest of the film.

Cujo was a modest box office success for both Paramount and Warner Bros. The film was released August 12, 1983, in the United States, opening in a second place that weekend. It grossed a total of $21,156,152 domestically, making it the fourth highest grossing horror film of 1983. 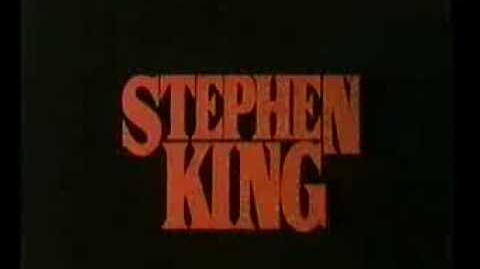 Retrieved from "https://horror.fandom.com/wiki/Cujo_(1983)?oldid=130022"
Community content is available under CC-BY-SA unless otherwise noted.