This page needs improvement. It can be improved by: pictures, information/trivia, quote

Cult of Chucky is a 2017 American horror film written and directed by Don Mancini. It is the sequel to the 2013 film Curse of Chucky and is be the seventh installment in the Child's Play and features Chucky once again to kill Nica Pierce, who has spent four years in a mental institution after members of her family where murdered.

Chucky returns to terrorize his human victim, Nica. Meanwhile, the killer doll has some scores to settle with his old enemies, with the help of his former wife.

Four years after the events of Curse of Chucky, an adult Andy Barclay is revealed to have the original Chucky's head, which is still conscious and deformed after being repeatedly tortured by Andy in retribution for his crimes. Nica Pierce has spent the past four years in a mental institution after being framed by Chucky for the murders of her family. After intense therapy, she now believes she was responsible for the murders and that Chucky was just a manifestation of her psychosis. As a result of her "breakthrough", her doctor, Dr. Foley, has her transferred to the medium security facility Harrogate Psychiatric Hospital.

Nica becomes part of a regular group therapy session, which is composed of Malcolm, a man with multiple identity disorder; Angela, an old woman who believes she is dead; Claire, a woman who burned her house down; and Madeleine, a patient who smothered her infant son to death. Dr. Foley introduces a new therapy technique which involves a Good Guy doll to the group. Most of the patients are unsettled by the doll except for Madeleine, who treats it as her baby.

Nica is visited by Tiffany Valentine, the legal guardian of her niece, Alice. Tiffany reveals that Alice has died and leaves her a Good Guy doll, which she claims was a gift from Alice. That night, Chucky awakens and discovers that Nica has attempted suicide. The next morning, Nica finds that her wrists have been stitched up, with a message stating "not so fast." She discovers that Angela has died, with the message "Chucky did it" in her blood. After realizing that Valentine was the last name of Charles Lee Ray's girlfriend, Nica begins to believe that Chucky is real. Believing Madeleine is in danger, Nica has Malcolm try to warn her. However, Madeline throws both the doll and Malcolm into an empty grave. The orderlies rescue Malcolm, but it is implied that Chucky has transferred his soul into his body. Chucky kills Claire next. Andy learns about the murders online and realizes that Chucky has somehow managed to transfer his soul into multiple bodies at once.

In a private session with Foley, Nica agrees to be hypnotized in order to regain any repressed memories about her involvement in the murders. While hypnotized, it is revealed that Foley has been sexually abusing Nica. Foley is then hit from behind by Chucky. Foley believes Nica is the one who assaulted him but is willing to keep quiet in order to blackmail her for sexual favors. Madeleine smothers her Good Guy doll with a pillow, forcing her to confront the repercussions of her real child's death. The orderlies bury the doll as a form of catharsis for Madeleine.

Andy hatches a plan to end the carnage once and for all by committing himself to the institution. He gets committed by assaulting one of the security guards. Foley receives a package brought in by Carlos. It is another Good Guy doll. Madeleine is visited by her doll, who has risen from the grave, and allows him to kill her so she can finally be with her baby. Foley attempts to assault Nica but is knocked out by one of the Chucky dolls. The Chucky doll awakens the doll Andy had sent. The three Chuckys reveal that the original Chucky found a voodoo spell on the Internet, which allowed him to separate his soul into multiple host bodies. Alice was one of his hosts, but was killed. Carlos is then killed by all the dolls in front of Nica.

Tiffany returns, killing an unnamed security guard. One of the Chucky's transfers his soul into Nica, causing her to have the ability to walk. She kills Foley and stumbles upon Malcolm, who is killed by Madeline's Chucky. The short-haired Chucky attacks Andy but Andy reaches into Chucky's chest and pulls out a gun he planted there. He shoots the doll before stomping its head, killing him. He attempts to shoot Nica, but has wasted all of his ammunition. The institution is sent into lock down, resulting in Andy being locked inside his cell, Madeline's Chucky going into hiding, and Nica/Chucky escaping. Nica/Chucky reunites with Tiffany before driving off together with the Tiffany doll, which is revealed to be alive as well.

In a post-credits scene, Andy's former foster sister Kyle from the second film enters Andy's house, having been sent by Andy to continue torturing the original Chucky's severed head.

In December 2013, following the release of Curse of Chucky, Don Mancini confirmed that he was planning on developing a seventh installment in the Chucky franchise.[7] By February 2015, Mancini was in the process of writing the script for the film.[8] A year later, Mancini, Jennifer Tilly and Fiona Dourif confirmed that shooting would soon begin for the film.[9] In December 2016, the production office for the film was opened in Winnipeg, Manitoba, Canada.[10] On January 5, 2017, the premise, cast, production schedule and distribution details for Cult of Chucky were revealed, with shooting set to commence four days later.[3]

In an October 2013 interview, Mancini revealed that since Child's Play 3, he had always wanted to introduce the concept of "Multiple Chuckys" but was unable to do so due to budget constraints. He eventually used the concept in Cult of Chucky, 26 years later.[11]

On January 5, 2017, the principal cast for Cult of Chucky was announced, featuring Brad Dourif as Chucky, Fiona Dourif as Nica Pierce, Alex Vincent as Andy Barclay, Jennifer Tilly as Tiffany and Summer H. Howell as Alice.[5][12] Each of them was featured in previous films, with Brad Dourif in all of them, Vincent in Child's Play (1988) and Child's Play 2, Tilly in Bride of Chucky (1998) and Seed of Chucky, and Fiona Dourif and Howell in Curse of Chucky (2013). Cult of Chucky marks Vincent's first principal role in the franchise since he was a child actor, in Child's Play 2, twenty-seven years prior.[5] Although Andy appeared in Child's Play 3, he was played by a different actor, Justin Whalin, due to the events taking place eight years after the second film, which came out less than a year earlier. Alex Vincent also appeared as Andy during a post-credits scene in Curse of Chucky.

Principal photography for Cult of Chucky began in Winnipeg on January 9, 2017, with the cinematographer from Curse of Chucky, Michael Marshall, returning in the same capacity.[3] Tony Gardner returned to create and perform the Chucky character as he had done previously for Seed of Chucky and Curse of Chucky.[13] Filming ended on February 18, 2017. 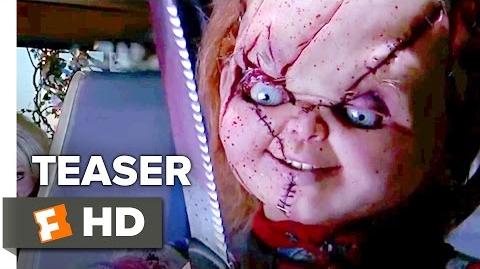 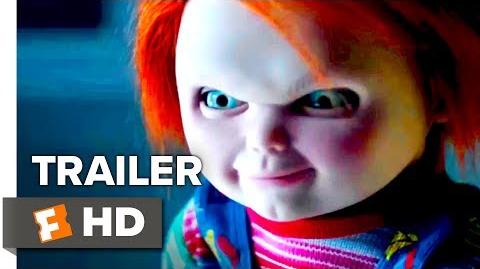 Retrieved from "https://horror.fandom.com/wiki/Cult_of_Chucky_(2017)?oldid=133746"
Community content is available under CC-BY-SA unless otherwise noted.