This page needs improvement. It can be improved by: pictures, list of deaths, information/trivia, quote, external links

Curse of the Puppet Master

Curse of the Puppet Master is a 1998 horror film written by Benjamin Carr and David Schmoeller, and directed by David DeCoteau. It is the sixth film in the Puppet Master franchise, the sequel to 1989's original Puppet Master, and stars George Peck as a scientist experimenting with transforming humans into puppets, his daughter, played by Emily Harrison and Josh Green as an orphan commissioned by the scientist to construct a puppet for his experiment.

The film begins at The House of Marvels, a doll museum, with Andre Toulon's puppets in a cage, watching their current master, a man named Dr. Magrew (George Peck), stuffing something into a crate. Before leaving, he promises the puppets that things will be different next time. He drives into the woods, where he puts down the crate and douses it with gasoline, then sets it on fire. From inside the crate, faint screaming can be heard. The next morning, Dr. Magrew's daughter, Jane (Emily Harrison), has just returned home from college. She asks her father about Matt, his assistant. Her father tells her that Matt left, since his father was ill. He and Jane decide to drive into town to take their minds off things. Robert "Tank" Winsley (Josh Green), a very tall but meek young man, works at the gas station in town. He passes his time by carving small wooden statues. He is frequently harassed by bully Joey Carp (Michael D. Guerin). Jane and Dr. Magrew arrive and tell Joey to get lost. Jane finds one of the statues that Robert was carving and complements him on it, then shows it to her father. Dr. Magrew introduces himself and Jane to Robert, and offers Robert a job helping him with the Marvel show. Robert accepts and they drive back to the house.

Upon arriving, they introduce Robert to Toulon's puppets, which amaze him, since they're alive. At dinner, Magrew reveals that he bought the puppets at an auction years ago, and that he is tried to make a living puppet just like Toulons', but has never been successful. He asks Robert if he'll help him carve the puppet, to which he agrees. The next day, during the show, the town sheriff, Sheriff Garvey (Robert Donavan) and Deputy Wayburn (Jason-Shane Scott) arrive. They tell Magrew that Matt is missing, and they wonder if Magrew's seen him since he left. He insists that he has not, but they did not quite believe him. That night, Magrew gives Robert the wood and the blueprints for the puppet. Robert does not understand how the puppet will live. Magrew tells him the way to make a dead thing live is: "You put your soul into it". Robert begins carving and works non-stop. At dinner a few nights later, Magrew reveals that Matt did carving for him as well. While Matt's work had quality, Robert's work has perfection, which is what he wants to make. He uses Blade as an example: "He never tires, never hungers, knows no fear, tells no lies, feels no pain, knows no secrets. And what is man except a being at war with himself? But not Blade. He has no hidden motives, no secret self. He is purely and perfectly what he is. In fact, I think the world would be a better place if we were all like him."

That night, Robert wakes up and finds that his legs have turned into carved, wooden legs, like a puppet. But this ends up being a nightmare. While Robert carves the puppet, Jane thinks he is working too hard and while trying to get his attention, causes him to cut himself. She bandages the cut on his hand for him, and asks him about himself. He reveals that he is an orphan, and he has never been smart enough to go to college. Jane tells him that his hands can do things that people with brains only imagine being able to do. They both develop feelings for one another and kiss. Later that night, Robert has another nightmare, but this time, his entire body (minus his head) is wooden, complete with inner clockwork gears. The next day, Jane, thinking that Robert is working too hard, convinces him to take a break. They drive to the woods, and Jane tells him about a beautiful clearing in the woods she found as a little girl. On the way, they stumble upon the half-burnt box that Dr. Magrew burned at the film's beginning.

Robert reaches in and pulls out a carved wooden hand, much like a puppet hand. He tries to show it to Jane, but she is walking away. Meanwhile, Joey and his friends are in the woods when Jane arrives. Joey begins to harass her and steps in her way, blocking her. She continuously shoves him to the point where he is angry, and he sexually harasses her. Robert arrives and tells Joey to leave her alone. Joey ignores Robert and threatens to rape Jane. Finally, Robert snaps and throws Joey onto the hood of his car and begins choking him. Jane pulls him off, and they drive back to the house. At the house, Robert confesses that when he was choking Joey, it had nothing to do with him or Jane. He felt like he was choking all the things that ever plagued him in his life. Dr. Magrew tells Robert that he is at war with himself: "There's another self inside, a true or more natural self. A creature of violence, with no fear, no conscience. A killer. You spend your whole life battling the self that lives inside. And what happened today, though just for a moment, you lost that battle. The real you, the true you, came out." Robert does not know if he is right or not, but he would "rather die than have it come out again."

Later that night, Joey comes to the "House of Marvels" to beat Robert up, but then decides to try to rape Jane again. As Jane sees him and tells him to get out, Pinhead, who was in the room, jumps at Joey and starts choking him, but Joey pulls him off and then starts squashing him with his foot, breaking off his left hand, and breaks his right arm. Dr. Magrew and Tank show up, but Joey makes a run for it. Dr. Magrew, who wants revenge, takes Blade and Tunneler to Joey's house, and sends them to kill him. Joey, who's lifting weights, gets his forehead slashed by Blade, and gets his crotch drilled by Tunneler. Back at the house, Robert shows up at Jane's room and shows her that he fixed Pinhead, Jane thanks Robert, then they start to kiss, she then tells him that he can stay if he likes, then they kiss again. As Dr. Magrew comes back, he sees Robert coming out of Jane's room, and then decides to talk to Jane, and is then surprised when he sees that Pinhead's fixed, but then he starts going crazy when Jane says she loves Robert, and tells her that he does not want to see her get hurt, and then leaves. Five days later, Friday, Jane finds Robert very sick, and then has her father call the doctor, but he really does not, he just fakes it. Then he tells Jane that he has to go pick up something for Jane at the post office at the edge of town, but Jane offers to go pick it up, while Dr. Magrew waits for the non-coming doctor to come. Back at Joey's house, the medical examiner (William Knight) believes that Joey's death was intentional. Sheriff Garvey starts to ask one of Joey's friends, named Art (Marc Newburger), when was the last time they saw Joey and who else was there, and he says last Sunday in the woods, and Mr. Magrew's daughter was there. Hearing the name Magrew, Sheriff Garvey and Deputy Wayburn decide to give Dr. Magrew a little visit. But as Garvey and Wayburn arrive at the House of Marvels, Six Shooter throws a rope around Wayburn's neck and Pinhead pulls the rope, causing him to fall and gets his head tunneled by Tunneler, killing him. At the same time, Blade slashes Garvey's leg, making him fall and drop his gun, and then he and Jester start slashing his face, with Magrew laughing as he watches them kill. Meanwhile at the post office, Jane keeps asking the shipping agent (Patrick Thomas) if he is sure what her father ordered is not there, so the agent calls Tommy Berke (J.R. Bookwalter) to ask him will it come in, but Tommy says that Magrew has not bought anything from him in the past six months.

Hearing this, Jane decides to go back to the woods to see what that burned box was. As she grabs what's inside of it, she sees that it's one of Matt's carved puppets, then it starts to speak: "Jane!" for help in Matt's voice. Terrified at what she saw, she then realizes that her father's going to do the same thing to Robert, so she quickly gets in her car, and drives back to the House. Meanwhile at the house, Dr. Magrew puts Robert's soul into the puppet, named Tank, he especially made for Robert via electricity, and it finally works this time, but the puppets are angry because they did not want him to kill Robert, so Blade slashes Magrew's legs, hand, and face, Tunneler drills through his leg, and Pinhead hits him with a metal cane. As Jane arrives at the house, she finds her father nearly dead, bleeding to death, with him pointing at Tank, saying "I did it". Suddenly, the Tank Puppet starts to move and points its arm at Dr. Magrew. The arm shoots out a bolt of electricity, and electrocutes Dr. Magrew straight between the eyes. The film ends with a shot of Dr. Magrew screaming before death, and Jane screaming in horrified terror.

While the plot of this film is very similar to the 1973 film Sssssss only with puppets instead of snakes, it was originally planned to be much different. Curse of the Puppet Master was originally meant to be the first of an epic Puppet Wars trilogy where Andre Toulon and his creations would battle the Mummy, Frankenstein and Dracula, with Guy Rolfe set to return as Toulon and Turhan Bey being considered for the part of a mysterious Egyptian. Funding fell through at the last minute, but not before second unit footage was shot of an old-fashioned steam train in Romania, footage that was eventually used in Retro Puppet Master. 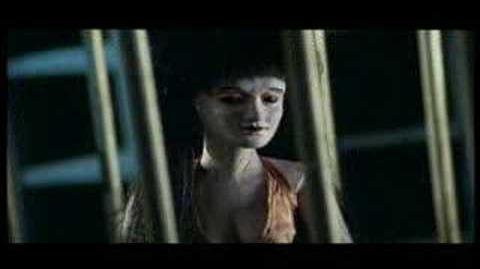 Curse of the Puppet Master Trailer
Retrieved from "https://horror.fandom.com/wiki/Curse_of_the_Puppet_Master_(1998)?oldid=130036"
Community content is available under CC-BY-SA unless otherwise noted.