De Lift (released in North America as The Lift) is a 1983 Dutch science-fiction horror film directed and written by Dick Maas about a mysteriously intelligent elevator that begins a killing spree to those who come near it.

An American remake titled Down was released in 2001 and it was also directed by Dick Maas.

An elevator mysteriously begins to function intelligently on its own, where victims who go near the elevator or use it are killed.

In a building in Amsterdam, a lift inexplicably begins to function alone after a lightning storm causes a power failure and traps four people in the lift. The lift will not open even after a subsequent power restore and the passengers almost suffocate. Soon subsequent malfunctions prove fatal as an elderly blind man falls to his death when the lift doors open to an empty shaft, while the building night watchman is decapitated by the elevator doors and a janitor is snared in the shaft in which his body drops through the elevator ceiling hatch.

Felix Adelaar, a technician from the elevator company Deta Liften, begins to examine the lift in an attempt to find any anomalies. During the course of several inspections, he meets Mieke De Boer, a journalist for The Nieuwe Revu, a local tabloid, who sees a potential good story regarding the events. When inspections reveal no apparent problems with the lift, Felix becomes obsessed with the continuing malfunctions of the lift. The police also has opened a case called De Lift, but do not do their job seriously. They pin it on the first suspect and close the case.

Felix, however, is determined to find out the truth. When he pays yet another visit to the building, he notices outside a van from Rising Sun, a manufacturer of microprocessors for automation and a secret supplier of experimental microprocessors to Deta Liften. Felix and Mieke, after collecting newspaper article archives about Rising Sun, try to meet up with the company's CEO, but the CEO begins to act nervously.

Additionally he discovers that his predecessor is in an asylum. Suspicious, he goes to him and questions him about the elevator. When the catatonic ill man casually sees something organic thrown to a wall during the questioning, he trembles with fear, which Felix notices.

Mieke then invites Felix to meet up with her former university professor, who specializes in electronics. The professor explains microprocessors sensitivity to external factors, such as electric fields, magnetic fields, and radioactivity, which undermine the proper functionality and tells about a biocomputer built years ago which had suddenly begun to self-program and went out of control.

The next morning Felix is summoned to the lift factory by his boss, who angrily suspends him for his unauthorized visit to Rising Sun. Felix then realises the truth. It turns out the lift's controller is a biocomputer and was developed by Rising Sun with the help of his boss. His predecessor found out and became mad with fear because of it. This controller now has gone rogue by malfunctioning and even killing people, which makes them nervous, because they illegally put it there. Resolved to solve the lift conspiracy, Felix returns to the building to deal with it. He gets the confirmation about his suspicions and decide to destroy the controller. A battle ensues between the controller and him in the shaft. He manages to harm it, but finally, the controller destroys the cables of the elevator in the hopes of killing him by launching the lift to the ground. Mieke, in the meantime, has joined him and saves him in the last minute.

As Rising Sun's CEO, Mr. Kron, arrives and sees in full that his experiment failed, he pulls out a gun and fires several bullets into the biocomputer seemingly killing it. The computer then shoots one of the broken cables out to drag him inside the shaft and hangs him. As a shaken Felix and Mieke walk down the stairs after that, the credits roll. It is unclear, however, if the biocomputer is dead.

The film was the screen debut of Dick Maas. It was a low budget production and it was produced in just 30 days. With the exception of the elevator interior and a tiny piece of elevator shaft, the entire film was shot on location.

Finally Dick Maas composed the entire score on two borrowed synthesizers.The recording of it took only one day.

The film was a commercial success to the extent that it became a cult movie. Additionally The Lift's premiere at the Cannes Film Festival led to it being the first Dutch film being picked up by Warner Brothers for distribution in the United States and the rest of the world.

Finally its success led to Maas directing more movies and writing screenplays in nearly every genre. 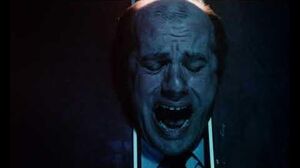 Retrieved from "https://horror.fandom.com/wiki/De_Lift_(1983)?oldid=130923"
Community content is available under CC-BY-SA unless otherwise noted.