10 years before the movie, a fighter named Genichirou Izayoi was killed by the human turned demon Rebi Ra and the battle turns Shinjuku into a living hell. A young man named Kyoya Izayoi was watching the news while at home until suddenly, Rebi Ra's power struck at World President Kazumi Rama. That night, Kyoya is visited by Aguni Rai who explains how Rebi Ra and Genichirou were his students and how Rebi Ra wanted demonic power.

Before Kyoya departs for Shinjuku, he meets with Kazumi's daughter Sayaka and brushes her off. Sayaka accidentally finds herself in Shinjuku under a demon horde. Kyoya arrives to help and saves her from 3 assailants. An old woman reminds Kyoya that Rebi Ra is at Shinjuku Station but is devoured whole by a spider demon. Just at Sayaka is about to become the same meal, a young man saves them.

The Spider Demon again tries to attack and is slain by Kyoya after a bloody fight. Hearing that one of his 3 powerful guard demons was slain, Rebi Ra sends an Illusory demon to kill the hero. The next day, in an attempt to reach Shinjuku Station by foot, the Illusory demon ambushes Kyoya and nearly kills him. That attempt was all but cut short.

A watching man named Mephisto appears and brings Kyoya and Sayaka to his home for recovery. After Mephisto tells of what is happening to Shinjuku, Kyoya is followed out by the Lady Demon. Mephisto senses something is wrong and kills her.

While searching for the dark lord, Kyoya encounters what he thinks is Rebi Ra but is scared by bats into a trap. Kyoya is thus put into a trance by the dark lord. At the remains of a park, Sayaka manages to free Kyoya.

Finally at Shinjuku station, Kyoya prepares to fight Rebi Ra but Sayaka is to be used as a sacrifice for the demon's entry into the human world. At first, Kyoya appears to have impaled Rebi Ra with his sword, but the attack fails to work and Kyoya is blasted away. Desperate, Kyoya recovers his father's sword Ashura and gains the strength of his father. As the demons are about to enter the human world, Sayaka is freed by Mephisto and Kyoya finally slays Rebi Ra. The demons are also forced back to their world and Kazumi is freed.

Before they go their separate ways, Mephisto reminds Kyoya that in the future, his services may be required again. 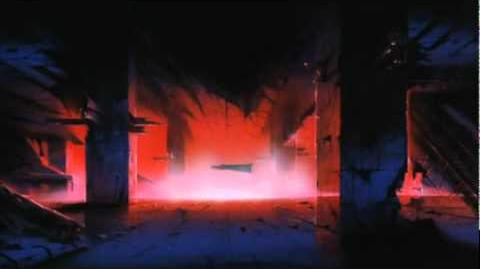 Retrieved from "https://horror.fandom.com/wiki/Demon_City_Shinjuku?oldid=123495"
Community content is available under CC-BY-SA unless otherwise noted.