This page needs improvement. It can be improved by: pictures, quote

Evil Dead is a 2013 horror film. It serves as a 'reimagining' or remake of the The Evil Dead, and the first film in the series since 1992's Army of Darkness. It is directed by Fede Alvarez and was produced by Bruce Campbell, Sam Raimi, and Rob Tapert. Bruce Campbell appears in a very brief cameo after the credits. The cast includes Jane Levy, Shiloh Fernandez, Lou Taylor Pucci, Jessica Lucas and Elizabeth Blackmore.

Five friends head to a remote cabin, where the discovery of a Book of the Dead leads them to unwittingly summon up demons living in the nearby woods.

Captured in the woods, an injured girl is restrained in a basement with many people present. Upon revealing she is demonically possessed, her father, Harold, sets her on fire and shoots her dead.

Subsequently, a group of friends, Mia, Mia's brother David, Eric, Olivia and David's girlfriend, Natalie, arrange a getaway to an old, remote cabin in the woods, helping Mia to get clean after her severe drug addiction led to her clinical death.

At the cabin, a foul stench leads them to discover a cellar, hosting animal corpses, a double-barreled shotgun and a book titled Naturom Demonto, a Sumerian variation of the Book of the Dead. Ignoring warnings on the book's pages, Eric reads a passage aloud, summoning a demon which begins to haunt Mia. Terrified, Mia pleads to leave, but the group refuses, after agreeing with Mia to stay put and help her through her addiction. Possessed by the demon, Mia attempts to warn David, but the group dismiss her claims as an excuse to leave. After killing David's dog, Mia burns her face in the boiling hot shower, as she fulfills a prophecy from the book. David rushes to get her to a hospital, but a flood blocks the roads.

Later, Mia shoots David in the arm with the shotgun, as her demonic side threatens the group. She manages to possess Olivia and Natalie, both who brutalize Eric, with Olivia stabbing him and Natalie attacking him with a nail gun. Eric beats Olivia's head in with a broken sink piece which kills her and David shoots Natalie, leaving her to bleed to death. Attempts to destroy the book are futile, as it describes a prophecy by which a demon named Taker of Souls needs to devour five souls in order to free the Abomination from hell. To achieve this, the Taker has taken Mia's body, and the only ways to release her are to burn her, bury her alive or dismember her.

David makes a plan, although he is emotional about Mia's lullaby. He enters the cellar with tranquilizers, but Mia attacks him before Eric saves him. Eric apparently dies from his wounds and David immobilizes Mia and buries her outside the cabin. After Mia dies, he digs her out and uses an improvised defibrillator to revive her free from possession. Back at the cabin, David is attacked by a revived and possessed Eric. Mortally wounded, David gives Mia the car keys to leave and locks her out of the house. Eric warns David about the Abomination's arrival. David shoots at gasoline to engulf the house in flames, killing both of them in the process.

Shortly after, the final stage of the prophecy from the book takes place. It begins to rain blood, and the Abomination crawls out of the ground and goes after Mia. During the pursuit, Mia is forced to rip off her hand when it becomes pinned under David's jeep. Mia then manages to kill the Abomination with a chainsaw, and its remains sink "back to hell" into the ground. The blood rain stops as dawn breaks, and Mia wanders away from the aftermath, oblivious to the Naturom Demonto on the ground as the book closes on its own.

During the film's closing credits, audio is heard from the original film; Professor Raymond Knowby tells about his discovery of the Naturom Demonto. Then, in a brief post-credits scene, an older Ash Williams recites his iconic line from the original films, "Groovy", and turns to the audience.

In April 2011, Bruce Campbell did an AskMeAnything interview on Reddit.com, saying "Newsflash: We are remaking Evil Dead. The script is awesome. I will be one of the producers and possibly play the milk man". He added "In all honesty, we would all love to make another Evil Dead movie. When that will happen? Who can say – we're all working on other jobs right now. We're not trying to dodge anybody's questions, there just isn't that much to talk about. The remake's gonna kick ass – you have my word".

On July 13, 2011 it was officially announced, via a press release, that Ghost House Pictures would be producing the upcoming remake of The Evil Dead, with Diablo Cody in the process of revising the script and Fede Alvarez chosen as the director. Lily Collins was originally reported to be in the lead role as Mia, but on 24th January 2012, Collins dropped out of the role. On February 3, 2012 it was announced that actress Jane Levy, star of the television series Suburgatory would be replacing Collins in the lead role as Mia.

The film was released April 5th, 2013 to mostly positive reviews. The film has a more serious tone than in previous installments, reflecting more of the deliberately gruesome and provocative nature of the 1981 original than the progressively lighter sequels. Of particular note is the production's emphasis on in-camera effects and physical props over cheaper computer generated effects that carry less visceral imppact. Stylistic changes include makeup effects more sophisticated and visually comparable to Linda Blair's makeup in The Exorcist, as well as a more clearly established agenda of the possessive force, identified this time as a specific demonic entity. The original films are more ambiguous on this point, with the primary occupation of the evil presence seemingly being to simply torment, possess and ultimately kill and claim the souls of whichever victims it can find. 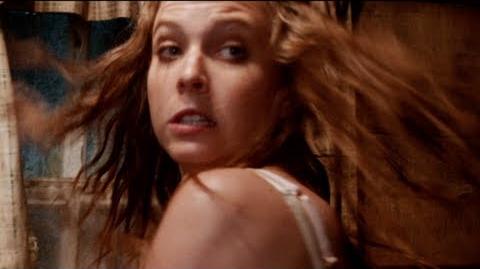 Retrieved from "https://horror.fandom.com/wiki/Evil_Dead_(2013)?oldid=132820"
Community content is available under CC-BY-SA unless otherwise noted.