Final Destination 2 is a 2003 horror film and sequel to the 2000 film Final Destination. Directed by David R. Ellis starring A.J. Cook as Kimberly Corman, and Ali Larter as Clear Rivers.

The film is set in White Plains, New York and in the proximity of Greenwood Lake, NY, in 2001, a year after the events of the previous movie and has two returning characters; Clear Rivers and the mortician William Bludworth. Grossing $16,017,141 on its opening weekend in the US, which was a significant portion of its overall profit.

When Kimberly has a violent premonition of a highway pileup she blocks the freeway, keeping a few others meant to die, safe...Or are they? The survivors mysteriously start dying and it's up to Kimberly to stop it before she's next.

One year after the explosion of Flight 180, Kimberly Corman has a premonition of a horrific pile-up on Route 23, killing everyone involved. She stalls her car on the entrance ramp with her friends Shaina, Dano, and Frankie. This stops teacher Eugene Dix, mother Nora Carpenter and her son Tim, pregnant Isabella Hudson, lottery winner Evan Lewis, drug addict Rory Peters, self-centered journalist Kat Jennings, and police officer Thomas Burke, from entering the highway. While Tom questions Kimberly about the inconvenience, her vision becomes a reality. While those who were spared stare in shock, an 18-wheeler truck crashes into Kimberly's SUV killing Shaina, Dano and Frankie.

While the survivors are questioned at the police station, they are informed of Alex Browning and his vision of the Flight 180 disaster, but only Kimberly takes it seriously. After Evan is impaled through the eye by an escape ladder while attempting to escape a house fire, she fears that Death is indeed reclaiming the survivors. Kimberly visits Clear Rivers, the last remaining Flight 180 survivor after Alex Browning is killed by a falling brick, in an asylum. Clear tells her that Death is working backwards because Evan was last to die in the vision. The only advice she gives Kimberly is to save herself. Kimberly and Tom begin working to save the other survivors using Kimberly's visions as clues. Despite their attempts, Tim falls victim next when he is crushed by a falling pane of glass. Clear then agrees to help and takes them to visit the strange mortician William Bludworth, who tells the group that they can escape Death via new life. They conclude that delivering Isabella's unborn baby will save the survivors. Isabella is taken into custody while the others meet to keep each other alive. Nora leaves the group to prepare her son's funeral, but her head gets trapped in the malfunctioning doors of an elevator and she is decapitated.

Isabella soon goes into labor and has to be rushed to hospital by a hapless policeman. The survivors drive out to meet Isabella, and it is revealed they all escaped Death due to the Flight 180 passengers dying,(Kimberly would have been killed if she hadn't been distracted by a news report of Tod Waggner, Tom would have been killed in a shoot off but was at the scene were Billy Hitchcock died, Eugene would have been stabbed by a child but was transferred to another school and Valerie Lewton took over him, Kat would have been choked to death by a gas spill in a Bed and Breakfast but her bus hit Terry Chaney and Rory would have died in a collapsing theatre but was held up in a cafe after Carter Horton was hit by the sign) and Death is now reversing its list in order to bring everything to a whole. Isabella and the officer cause the survivors' car to crash. Eugene's lung is punctured by a pipe, and he is rushed to hospital. A family, the Gibbons, try to help everyone out of their situation, including their son, Brian. Brian is nearly hit by a van, but saved by Rory. Kat is then killed when a fireman accidentally sets off the airbag in her car with the jaws of life, knocking her head into a sharp pipe protruding from her headrest. A cigarette she drops ignites the spilled petrol tank of a news team's van, causing the van to explode and sending a barbed wire fence flying which dismembers Rory. Tom, Kimberly, and Clear race to the hospital. On the way, Kimberly has another vision of what she thinks is "Dr. Kalarjian" trying to strangle Isabella. When they arrive, they witness Isabella giving birth. They rejoice but both Eugene and Clear are killed in a gas explosion because Isabella was never meant to die in the pile-up. Kimberly makes a bold move by stealing an ambulance and driving into a nearby lake to sacrifice herself. She nearly drowns but is saved by Burke and then revived in the hospital by Dr. Kalarjian. The vision from earlier was Dr. Kalarjian standing by her side, not strangling Isabella. She and Tom are relieved that they have finally defeated Death.

Some time later, Kimberly, her father, Tom, and the Gibbons, who helped the survivors during their car crash, have a barbecue. The Gibbons mention to Tom and Kimberly that Rory saved Brian from being killed by the van, which the two apparently did not see. They realize that they are not safe after all just as the barbecue explodes and blows Brian to pieces. The film ends with Brian's arm landing on his mother's plate.

On its release, Final Destination 2 received generally mixed reviews from critics, earning a 47% approval rating on Rotten Tomatoes, based on 106 reviews (50 positive, 56 negative). While most praised it for its special effects and inventive death sequences, some dismissed it as being 'an average sequel to an average movie'. Nevertheless, this film has received the second highest score amongst the five films in the franchise on Rotten Tomatoes.

The film has landed on many "best car crash/accidents" lists including one by New York Magazine which cited the highway pile-up scene as the greatest car crash in movie history, calling it "the new gold standard for car-related chaos in cinema". Even acclaimed director Quentin Tarantino was quoted as saying that the opening scene was "a magnificent car action piece". The highway pile up was nominated for "Best Action Sequence" at the 2003 MTV Movie Awards. 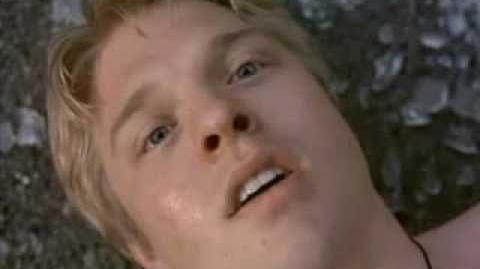 Retrieved from "https://horror.fandom.com/wiki/Final_Destination_2_(2003)?oldid=125412"
Community content is available under CC-BY-SA unless otherwise noted.