Firestarter is a 1984 science fiction horror thriller movie based on the novel of the same name by Stephen King. It was directed by Mark L. Lester and was produced by Frank Capra Jr. and Martha De Laurentiis based on the novel of Stephen King. The plot concerns a young girl named Charlie McGee, who develops pyrokinesis and the secret government agency The Shop, which seeks to control her. The film stars Drew Barrymore as Charlie McGee and David Keithas Charlie's father Andy McGee. The movie was filmed in and around Wilmington, Chimney Rock, and Lake Lure, North Carolina.

A miniseries follow-up to the film, titled Firestarter 2: Rekindled, was released in 2002 on SCI FI.

Aside from many small details in which the plot of the book and the film differ, the most prominent difference is the film's complete omission of the hippie background of Charlie's parents. In the film they are ordinary middle-class suburban parents, not the former flower-children of the novel. This presumably accounts for the difference in the ending, in which young Charlie in the film tells her story to the New York Times instead of Rolling Stone. Also of note is the book's elaborate explanation of Rainbird's fascination with Charlie. Rainbird is a Native American, who sees Charlie as in touch with mystical powers with which his people have lost contact, and believes he may reconnect with these abilities if he looks into her eyes when she dies. This is not explained in the film, and some film critics such as Gene Siskel saw Rainbird as simply a garden-variety child molestor. Additional differences include: 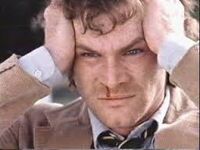 Add a photo to this gallery
Retrieved from "https://horror.fandom.com/wiki/Firestarter_(1984)?oldid=124109"
Community content is available under CC-BY-SA unless otherwise noted.