Over the course of ten years, Freddy Krueger has returned and succeeded in killing nearly all of the children in the town of Springwood, Ohio. One of the only surviving teenagers, known only as "John Doe" throughout the film, finds himself confronting Freddy and being deliberately thrown through an invisible barrier into the outside world. He finds himself wandering the streets with no memory of who he is, and with a newspaper article about a woman named "Loretta Krueger".

Meanwhile, at a shelter for troubled youth, Spencer, Carlos and Tracy plot to run away from the shelter. Carlos was physically abused by his parents, Tracy was sexually abused by her father, and Spencer simply does not want to conform to his father's lifestyle. John, after being picked up by the police, becomes a patient of Dr. Maggie Burroughs. Maggie decides to take him to the town that is mentioned in the article he was carrying. Tracy, Carlos, and Spencer stow away in the van, but are discovered when John has a hallucination and almost wrecks the van just outside of Springwood.

After encountering the adult inhabitants of Springwood, Maggie and John find out that Freddy Krueger had a child that was taken away from him. John begins to suspect that he is Freddy's child, which, to him, would explain why he has not been hurt. Meanwhile, Tracy, Spencer, and Carlos, after unsuccessfully trying to leave Springwood, decide to rest at a nearby abandoned house, which transforms into 1428 Elm Street (Freddy's, Jesse's, Nancy Thompson's former home). Carlos and Spencer fall asleep and fall prey to Freddy. Tracy is awakened by Maggie, but John, who went into the dream world with Tracy to try and help Spencer, is still asleep. Maggie and Tracy decide to take him back to the shelter. Freddy reveals to John that he was using him to get to his daughter, and then impales John on a bed of spikes. Before he dies, John tells Maggie that Freddy's child was not a boy. When Maggie and Tracy cross the Springwood town limit, the barrier shatters.

Tracy and Maggie return to the shelter, but they discover that no one remembers John, Spencer, or Carlos except for Doc, who has learned to control his dreams. Maggie remembers what John told her and discovers her own adoption papers. That night, she falls asleep and encounters Freddy. He tells her that she is really Katherine Krueger, Freddy's daughter. He explains to her that he used her to escape Springwood and now wants to start his killing spree in a new town.

Doc discovers Freddy's power comes from the "dream demons" who continually revive him, and that Freddy can be killed if he's pulled into the real world. Maggie decides that she will be the one to enter Freddy's mind and pull him into the real world. Once in the dream world, she puts on a pair of 3-D glasses — the theatrical version of the film was in 3D during the climax — and goes into Freddy's mind. There, she finds out that Freddy was teased as a child, inflicted self-abuse as a teenager, and murdered his wife, Loretta Krueger, in front of his own daughter and was given the power to be immortal from fiery demons as he was burning due to the parents who burned him with molotov cocktails. After some struggling, Maggie manages to pull Freddy into the real world.

Both Maggie and Freddy end up in hand-to-hand combat against one another after Freddy tries to earn Maggie's sympathy. Maggie continues to battle Freddy, enraged by her knowledge of what he has done. Eventually, Maggie stabs Freddy in the stomach with his own glove, and then sticks a pipe bomb in his chest, causing him to explode. Maggie manages to evade the blast and tells both Doc and Tracy that Freddy is dead. This is the first movie in the Nightmare series to end without hinting that Freddy may still be alive.

List of deaths in the film, Freddy's Dead: The Final Nightmare. 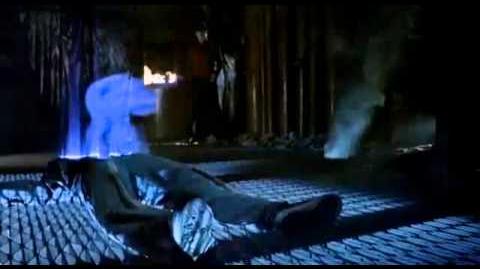 Retrieved from "https://horror.fandom.com/wiki/Freddy%27s_Dead:_The_Final_Nightmare?oldid=104381"
Community content is available under CC-BY-SA unless otherwise noted.