Friday the 13th Part II is a slasher film directed by Steve Miner. A sequel to Friday the 13th (1980), it is also the second film in the Friday the 13th series and the first to feature Jason Voorhees as the killer. It was a moderate box-office hit, opening on May 1, 1981, in first place.

The film begins with the only survivor from the first movie, Alice, being slain and murdered by a mysterious prowler in her own home two months after the conclusion of the original film.

Some time later, a group of young adults have come to Crystal Lake to attend a counselor training center that has been set up near the now-condemned Camp Crystal Lake. While some counselors are in town on their way to the facility, Crazy Ralph appears and tells the counselors to turn back, as the young counselors five years ago did not heed his warning. Paul, the leader of the group, explains how camp counseling is a serious job, and that the main danger in this area is bears. That night, around a campfire, Paul tells the people about how Jason Voorhees drowned in the same lake, which their training area also bounds; how his mother was found to be the infamous murderer of "Camp Blood"; and that Alice survived only to disappear shortly thereafter, and that some of the local residents believe Jason is still alive and viciously protects the area around Crystal Lake. When the counselors seem into the story, they are shocked by a man with a spear, but it only turns out to be Ted in a monster mask and Paul claims that Jason is dead.

While Paul and Ginny are seen making out, Crazy Ralph is standing by a window, and is suddenly killed by a prowler using a garotte. Two of the counselors, Sandra and Jeff, sneak away to Camp Crystal Lake, which is now in disrepair. As they find a dead animal that they assume is Terry's dog, they are startled by a police officer and catches them trespassing. The cop returns the two counselors to camp, where Paul only recommends a light punishment. However, when driving, the officer sees a masked man dart out in front of his squad car, running in the direction of the off limits Camp Crystal Lake. The cop chases after the masked man to arrest him as well, only to lose him and go into an old run down shack. The officer then sees a horrifying sight. It is not shown to the viewer as the prowler who killed Crazy Ralph also murders the officer from behind with a hammer claw.

After getting to know one another and participating in some training exercises (which consist of dancing, jogging through the woods, swimming and a cookout), the majority of the trainees leave the campsite to party in town. The six counselors remaining, which consists of Vicki, Mark, Sandra, Jeff, Terry, and Scott, are soon stalked and murdered one by one. Terry goes for a swim and Scott steals her clothes only to be caught by a trap while running from her. She takes her clothes back and promises to cut Scott down. As Terry goes into her cabin to retrieve her knife, Scott is killed upside down by the prowler. When Terry returns, she sees Scott dead and the prowler. Back at the cabin Sandra and Jeff go upstairs while Vicki goes to her cabin and Mark goes outside during the brief storm where he is slain and his body and his wheelchair thrown down a stair. The prowler enters the cabin and goes upstairs, taking the spear left by one of the counselors earlier. He enters the room where Sandra and Jeff and on the bed and prepares to stab them both when Sandra sees him. Only one of the trainees realizes what has happened before getting killed (Vicki), as she returns from the cabin, goes upstairs and is found by the prowler, who cuts her leg. Vicki backs up into the mangled corpse of Jeff and screams and is killed. Eventually Ginny and Paul return to the camp, and at the same time the killer is dragging the slain bodies of Sandra, Jeff and Vicki down the stairs. Ginny and Paul discover the lights are not working in the main cabin and sheets on an upstairs bed appear to be covered in blood. Ginny screams in horror when she sees the dead bodies of two of the counselors, and then opens the freezer and sees the corpse of Crazy Ralph fall out. Paul is attacked by a figure whose head is covered with a burlap sack as Ginny screams and runs out into the dark woods.

After a lengthy chase, Ginny stumbles upon a run-down cabin and enters. In the back room, she discovers a makeshift altar holding the severed head of Pamela Voorhees. Littered around the altar are several bodies of the recently slain victims as well as the rotten corpse of Alice. The killer is identified as Jason Voorhees, who seems to have survived his drowning. Ginny dons Mrs. Voorhees' sweater and deceives Jason into believing that she is his mother (although Jason wises up when he sees his mother's severed head). After Paul wrestles with Jason, Ginny slams a machete through his shoulder. Paul and Ginny retreat back to their cabin believing Jason is dead and find Muffin, Terry's pet dog. As Ginny calls to Muffin to come, an unmasked Jason leaps through the window and begins to pull Ginny out. Ginny wakes up while being placed in an ambulance saying "Paul, Paul, where's Paul".

Film critic Roger Ebert of the Chicago Sun-Times gave Friday the 13th Part 2 half of one star out of 4, stating: "This movie is a cross between the Mad Slasher and Dead Teenager genres; about two dozen movies a year feature a mad killer going berserk, and they're all about as bad as this one." 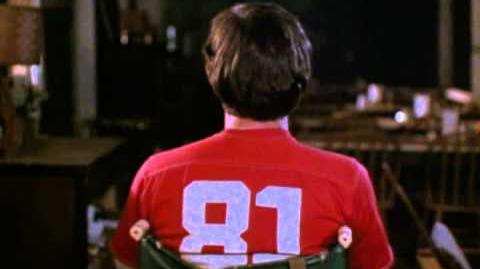 Retrieved from "https://horror.fandom.com/wiki/Friday_the_13th_Part_2_(1981)?oldid=131704"
Community content is available under CC-BY-SA unless otherwise noted.