Friday the 13th Part VI: Jason Lives is the sixth installment in the Friday the 13th film series. It was released on August 1, 1986 and was directed by by Tom McLoughlin.

The film gave Jason Voorhees a new look because he is brought back from the dead and when that happened he receives a more of a zombie look than human, unlike the earlier films where he acts and is hurt like a human. With the release of Jason Lives from then on he received zombie qualities such as superhuman strength and also became practically invincible.

Warning: this text contains details about the plot/ending of the film.
Tommy Jarvis is released from the mental institution in which he has spent most of his adolescence. Along with his friend Allen Hawes, Tommy goes to dig up and cremate Jason's corpse. But when he pierces Jason's chest with an iron fence post, a bolt of lightning resurrects him. Jason quickly takes out Allen with a fist through the chest, and when Tommy flees Jason heads for the renamed and reopened Lake Forest Green.

Tommy enters the Forest Green Police Department and demands the help of the Sheriff. But when Tommy tries to grab a shotgun to take matters into his own hands, the Sheriff Garris has Tommy thrown in jail. Meanwhile, counselors Elizabeth and Darren are killed by Jason on their way to camp. The next morning, Garris' daughter Megan and her fellow counselors Sissy, Paula and Cort visit the station. Tommy warns them of Jason's resurrection before the Sheriff escorts him towards the town limits.

Back at camp, the counselors prepare for the coming campers. Meanwhile, Jason picks off five survivalist gamers in the woods. On the way out of town Tommy makes a break for the graveyard to prove Jason's not in his grave - but the caretaker has covered it over. The officers continue their escort, but when their out of view Tommy turns right back around towards the town he's always known as Crystal Lake.

That night, Cort heads off for a tryst with a girl named Nikki. Jason cuts the power to her RV and boards as they drive away. He slams Nikki's head through a wall and stabs Cort in the head. When the police discover Elizabeth and Darren's bodies, the Sheriff suspects Tommy. But Megan isn't convinced, and when Tommy calls the station she answers and makes plans to meet. At camp, Sissy is killed as Megan and Tommy try to evade the police. Tommy is thrown in jail despite Megan's alibi for him. Jason uses camp counselor Paula to repaint one of the cabins in blood red, and Megan busts Tommy out.

The police make their way to the camp, and officers Thornton and Pappas are killed before the Sheriff comes up against Jason. Megan and Tommy arrive at the seemingly serene camp, but soon find Paula's remains. Sheriff Garris is killed trying to keep Jason away from his daughter. Despite Megan's protests, Tommy goes out on the lake alone and calls to Jason.

In the end, Tommy is able to use a boulder to chain Jason to the bottom of Crystal Lake, however he attempts to drown Tommy, but Megan stops him, grinding his throat up with the propeller blades of a boat. Megan brings Tommy to shore, and he says Jason is home. 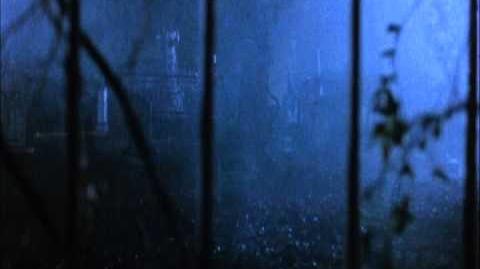 Retrieved from "https://horror.fandom.com/wiki/Friday_the_13th_Part_VI:_Jason_Lives?oldid=143188"
Community content is available under CC-BY-SA unless otherwise noted.