Despite its title, the film is unrelated to the 1952 film of the same name.

A salvage crew discovers a long-lost 1962 passenger ship floating lifeless in a remote region of the Bering Sea, and soon notices that its long-dead inhabitants may still be on board.

In May 1962, dozens of wealthy passengers are dancing in the ballroom and upon the deck of the Italian ocean liner, Antonia Graza, while an Italian woman, Francesca, sings "Senza Fine". On the deck, a young girl, Katie Harwood, is sitting alone, until the ship's captain offers to dance with her. Elsewhere, a hand presses a lever that unravels a thin wire cord from a spool. The spool snaps and the wire slices across the dance floor, bisecting the dancers. Katie is spared due to her height.

Forty years later, a boat salvage crew: Captain Sean Murphy, Maureen Epps, Greer, Dodge, Munder and Santos are celebrating a success at a bar when Jack Ferriman, a Canadian weather service pilot, approaches them and says he spotted a vessel running adrift in the Bering Sea. Because the ship is in international waters, it can be claimed by whoever brings it to port. The crew sets out on the Arctic Warrior, an ocean salvage tugboat. They discover the ship is the Antonia Graza, which was believed to be lost at sea. When they prepare to tow it, they discover it contains a large quantity of gold. Strange things begin to happen. Epps claims to have seen a little girl on the stairwell, Dodge finds a digital watch on the bridge and Greer claims to have heard a woman singing throughout the ship. Epps and Ferriman discover the corpses of another salvage crew. They decide to leave the ship but take the gold, but an invisible force opens a gas valve in the engine room and the Arctic Warrior explodes as the engine is started, killing Santos and leaving the others stranded. They attempt to repair the Antonia Graza and sail it back to land. Greer encounters Francesca, the singer he heard, who seduces him and then leads him off a precipice to his death. Captain Murphy, after entering the captain's cabin, finds the ghost of the Antonia Graza's Captain, who explains that they recovered the gold from a sinking cruiseship, Lorelei, along with a sole survivor. He shows Murphy a picture of the survivor, who he recognizes. He rushes to tell the rest of the crew, but a supernatural force causes him to see everyone he meets as the burned ghost of Santos, causing the crew to think he has gone mad and lock him in the drained fish tank.

Epps meets Katie, who reveals what happened on the Graza; the sole survivor of the Lorelei convinced the crew of the Graza to murder the passengers in order to claim the gold for themselves. One of the ship's officers turned on the rest of the crew and killed them all only to be killed himself by Francesca. Another man then joined Francesca in an embrace and walked away as a large hook swung into her face, killing her. The man is revealed as Jack Ferriman, who is actually a demonic spirit who masterminded the massacre.

Epps then rushes to Murphy, only to find him drowned in the now-flooded fish tank. Although devastated, she deduces that Ferriman lured the salvage team to the Graza to repair the sinking ship, and that the best way to fight him is to sink it. Epps rushes to the bridge to tell Dodge they must leave but Ferriman shows up before she can mention him. When Epps sets off to find Munder, Ferriman starts questioning Dodge about his feelings for her. Dodge grows suspicious and unnerved, leading him to shoot Ferriman, who appears dead but looks up when Dodge leaves. Down below, Munder is crushed between two gears while fixing a blocked pump. After seeing his remains, Epps sets explosives, just as Dodge shows up saying they should take the gold and run. Epps refuses, then suspiciously questions Dodge, who laughs and morphs into the demonic Ferriman (revealing the former's fate). Ferriman describes himself as a salvager of souls; a job he says he earned by a lifetime of sin. He explains that since Katie was a child and never committed a true sin, he cannot control her as he does the evil ghosts. So long as the Antonia Graza remains afloat he can use it as a trap and keep "management" satisfied. Epps detonates the explosives and sinks the Graza. Katie helps Epps escape the sinking ship. She is left in the debris as the souls trapped on the ship ascend to heaven.

Drifting on the open sea, Epps is found by a cruise ship and returned to land. As she is loaded into an ambulance, she sees the battered crates of gold being loaded onto the cruise ship, followed by Ferriman. He glares at Epps and carries on; she cries out as the ambulance doors close.

The film first appeared in January 2002, as a spec script called Chimera by Mark Hanlon. Originally, the film, as written, was a relatively bloodless psychological thriller as opposed to a more blatantly supernaturally-themed film. Most notably, much of the film's gore is absent from the screenplay. The film would have focused on four salvage crew members who end up stranded aboard the ghost vessel they are scuttling (the titular Chimera); over the course of one night, each member - whether it be from panic, cabin fever, or supernatural forces - goes insane and plots to kill the other three members of the crew.

In the above-mentioned script, Murphy is the "main killer" and the ship sinks as it runs on the rocks. Murphy and Epps survive till the end but while the ship is sinking Murphy runs to take gold ingots. The weight and also the lost time bring death to Murphy. Like in the final version, Katie helps Epps to escape. Over time, the script underwent rewrites, and the psychological aspects of the script were all jettisoned in favor of making the film a slasher. It has been suggested that "The cast signed on based on this (original) draft ... and were sadly disappointed to find the script had been radically changed by Joel Silver and associates when they arrived to begin shooting."

The film received mainly negative reviews on its theatrical release. Review aggregate website, Rotten Tomatoes, rates the film at 14% based on 124 reviews. The consensus states that "With a plot as creaky as the boat, Ghost Ship fails to deliver the scares". Similarly, Metacritic gives the film a score of 28/100 based on 25 reviews and rates the film as "generally unfavorable".

Roger Ebert stated "It's better than you expect but not as good as you hope." Website Bloody Disgusting listed Ghost Ship's opening massacre as #13 in their list of "The Top 13 Kills in Horror Movie History". The film has since garnered somewhat of a cult following, with many fans especially praising the soundtrack and the flashback scene which depicts how the original crew killed the passengers. 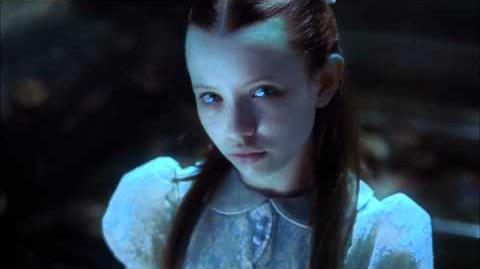 Retrieved from "https://horror.fandom.com/wiki/Ghost_Ship_(2002)?oldid=126121"
Community content is available under CC-BY-SA unless otherwise noted.