Ginger Snaps is a 2000 Canadian horror film directed by John Fawcett. The film focuses on two teenage sisters who have a fascination with death. The title is a pun on the cookie ginger snap. "Snap" (snapping) also relates to losing one's self-control, or a quick, aggressive bite. During the film's production, the Columbine High School massacre and the W. R. Myers High School shooting took place, causing public controversy over the film's horror themes and the funding it received from Telefilm.

The film is set in Bailey Downs, a suburb where a rash of dog killings has been occurring. Brigitte and Ginger Fitzgerald are teenage sisters who harbor a fascination with death and, as children, formed a pact to die together. One night, while on the way to kidnap a dog owned by school bully Trina Sinclair, Ginger begins her first period, which results in the girls being attacked by the creature responsible for the maulings. The creature wounds and bites Ginger, but Brigitte rescues her. As the girls flee, the creature is run over by a van belonging to Sam MacDonald, a local drug dealer. Ginger decides not to go the hospital as her wounds heal quickly.Following the attack, Ginger undergoes physical and mental transformations that concern Brigitte. Ginger starts to behave aggressively and grow hair from her wounds, sprouts a tail, and heavily menstruates. Ignoring Brigitte's warnings, Ginger has unprotected sex with a classmate named Jason and kills a neighbor's dog. Brigitte and Sam agree that Ginger was attacked by a werewolf and is in the process of turning into one. On Sam's advice, Brigitte persuades Ginger to have her navel pierced using a silver ring in the hopes of curing her. Instead, it proves ineffective. Sam then suggests a monkshood solution, which is not possible as the plant is only found in the spring.

Later, Trina shows up at the Fitzgerald house to accuse Ginger of kidnapping her dog. As she fights with Ginger, Trina is accidentally killed when she slips and hits her head on the kitchen counter. The sisters narrowly avoid their parents as they put the body in a freezer, explaining the blood to be part of another school project. Brigitte accidentally breaks off two of Trina's fingers while trying to get the corpse from the freezer. They lose the fingers when they bury Trina's body. Brigitte tells Ginger she can't go out anymore, but Ginger remains defiant.

On Halloween, Brigitte takes monkshood purchased by her mother and asks Sam to make the cure. While trying to track down Ginger, Brigitte is attacked by an infected Jason and she defends herself by using the cure on him. She witnesses his immediate change in behavior, which proves the cure's success. At school, Brigitte finds that Ginger has murdered the guidance counselor, Mr. Wayne, and is a witness to her killing of the school's janitor.

The girls' mother discovers Trina's corpse and goes looking for her daughters. While she is looking for them, she sees Brigitte running and picks her up. As she drives Brigitte to the Greenhouse Bash, she tells her that she will burn the house down by letting it fill up with gas then lighting a match to erase evidence of Trina's death. Brigitte arrives to find Sam rejecting Ginger's advances. As he approaches Ginger, she breaks his arm. In despair, Brigitte infects herself as Sam pleads with her not to. As the sisters leave, Sam knocks Ginger out with a shovel. Brigitte and Sam then take her back to the Fitzgerald house in his van, and prepare more of the cure for Ginger.

Ginger fully transforms into a werewolf on the way home and escapes the van. Aware that she has transformed, Sam and Brigitte hide in the pantry as he makes the cure. When he goes to find Ginger, Ginger mutilates Sam. Brigitte picks up the dropped syringe and follows the blood trail downstairs. After finding an injured and bloody Sam she tries to save him by drinking his blood in an attempt to calm Ginger, but can't go through with it. Ginger sees Brigitte's revulsion and kills Sam in front of her by biting him in the jugular.

As Ginger stalks Brigitte through the basement, Brigitte returns to the room where they grew up. Finding the knife that Ginger had been using to remove her tail, Brigitte holds the cure in one hand and the knife in the other. Ginger lunges at her, becoming fatally stabbed with the knife. Brigitte lays her head upon her dying sister's chest and sobs.

In January 1995, Fawcett "knew that he wanted to make a metamorphosis movie and a horror film. He also knew that he wanted to work with young girls." He talked to screenwriter Karen Walton, who was initially reluctant to write the script due to the horror genre's reputation for weak characters, poor storytelling, and a negative portrayal of women. However, Fawcett convinced Walton this film would re-interpret the genre. The two encountered trouble financing the film. They approached producer Steve Hoban, with whom they had worked before, and he agreed to produce the film. Hoban employed Ken Chubb to edit and polish the story, and after two years they were ready to seek financiers.

Motion International committed to financing and distributing the film in Canada, and Trimark agreed to be the American distributor and financier. The film seemed ready to go into production by fall of 1998, however negotiations with Trimark made the producers miss the budgeting deadline for Telefilm Canada, the Canadian federal film funding agency. Rather than go ahead with only 60% of the funding, Hoban decided to wait a year for Telefilm's funding. During this interval Trimark dropped the film. Lions Gate Films took Trimark's place, and Unapix Entertainment agreed to distribute the DVD. The film's budget was less than $5 million.

Casting the two leads met with substantial difficulty. Whilst a casting director was easily found for Los Angeles, Canadian casting directors proved to be appalled by the horror, gore, and language. When one finally agreed to pick up the film, the Columbine shooting and another school shooting in Alberta suddenly thrust the public spotlight on violent teens. The Toronto Star‍ '​s announcement that Telefilm was funding a "teen slasher movie" met with a flurry of debate and outrage in the media, which generated a remarkable amount of (adverse) publicity for such a small, independent film.

Casting took place in Los Angeles, New York, Toronto, Montreal, and Vancouver. Perkins and Isabelle auditioned on the same day at their agency in Vancouver, reading to one another off-camera. When their taped auditions arrived, screenwriter Karen Walton said that they were exactly as she had pictured the characters.

Interestingly, both actresses were born in the same hospital, attended the same pre-school, elementary and private schools, and are at the same agency. Perkins was twenty-two at the time and Isabelle four years younger, but it was Perkins who would be cast as the younger sister.

Thus, after six months of fruitless searching, the two leads were found on the same day. Attention then turned to the next most important characters: the drug dealer and the mother roles. Mimi Rogers readily agreed to play the mother, Pamela, saying that she liked the black humour and comic relief in the role. Robin Cook, the Canadian casting director, put forward one of her favourites, Kris Lemche, for the role of drug dealer Sam. After seeing Kris's audition, Fawcett hired him.

Principal photography took place between October 25 and December 6, 1999, lasting a little over six weeks. Three of Toronto's suburbs, Etobicoke, Brampton (Kris Lemche's home town), and Scarborough served as the suburb of Bailey Downs. Shooting outside during Toronto's winter for sixteen hours a day, six days a week meant that sicknesses would make their rounds through the cast and crew every few weeks. On the first day of shooting in the suburbs, all the stills photographs for the title sequence were created. The bloody, staged deaths drew a crowd and Fawcett worried about upsetting the neighbours. The girls were covered in fake blood for the shots and, at the time, a homeowner's basement served as their changing room. Each time they needed to change, someone had to distract the homeowner's four-year-old child.

The schedule was quickly so off kilter that cast and crew were turning up to shoot day scenes at 11:00 p.m., and shooting for a day scene in the greenhouse began at midnight. The Director of Photography solved the problem by using diffusion gel and four eighteen kilowatt lamps which generated enough light to be seen a mile high in the sky.

The special effects proved to be a major hardship as Fawcett eschewed CGI effects, and preferred to use more traditional means of prosthetics and make-up. Consequently Isabelle had to spend up to seven hours in the makeup chair to create Ginger's transformation and a further two hours to remove them. Often covered in sticky fake blood that required Borax and household detergent to remove, she further endured wearing contacts that hindered her vision and teeth that meant she couldn't speak without a lisp. The most aggravating thing was the full facial prosthetic which gave her a permanently runny nose that she had to stop up with Q-tips.

Ginger Snaps grossed C$425,753 domestically, making it the fifth highest-grossing Canadian film between December 2000 and November 2001. Owing to a cult following, it has achieved significant video and DVD sales. These earnings, combined with moderate theatrical success abroad, led to the production of two further films.

Critics who panned the film thought the puberty metaphor too obvious, the characters too over the top (especially the mother), and the dark humour and horror elements unbalanced. However, they did credit it as a worthy attempt and often gave it half marks on their star scales. Because the film links Lycanthropy to menstruation and features two sisters, Ginger Snaps lends itself to a feminist critique. "By simultaneously depicting female bonds as important and fraught with difficulties, Ginger Snaps portrays the double-binds teenage girls face." and "Ginger is an embodiment of these impossible binaries: she is at once sexually attractive and monstrous, 'natural' and 'supernatural,' human and animal, 'feminine' and transgressive, a sister and a rival."

Ginger and Brigitte at the nurse's office

Ginger Strutting down a hallway

Jason after being cured 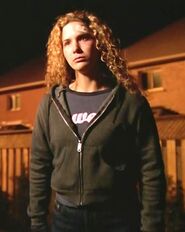 Ginger at the Halloween Bash

Add a photo to this gallery
Retrieved from "https://horror.fandom.com/wiki/Ginger_Snaps?oldid=130799"
Community content is available under CC-BY-SA unless otherwise noted.