Ginger Snaps Back: The Beginning is the prequel to Ginger Snaps and Ginger Snaps II: Unleashed. The third and final film in the trilogy takes place in 19th century Canada, folllowing the exploits of the ancestors of the Fitzgerald sisters of the two previous movies: Ginger (Katharine Isabelle) and Brigitte (Emily Perkins), who are identical in all respects to their modern-day counterparts.

The film begins with a brief summary of the Northern Legion Trading Company, stating that each spring a party from the fort traveled to Hudson Bay to trade pelts for winter provisions but in 1815 the party never returned. This is when the story begins, almost two hundred years before "Ginger Snaps". Brigitte and Ginger are lost with their horse in the Canadian wilderness when they come across a seemingly abandoned camp that bears signs of a violent attack. They then notice an elderly Indian woman, who tells them she too had a sister once, and gives the girls two necklaces with bird skulls on them that belonged to her and her sister. The woman speaks of them as the Red and the Black, and warns that if they don't "kill the boy", one sister will kill the other. Suddenly the girls' horse is startled and flees; they try to chase it, but Brigitte's foot gets caught in a bear trap set by an Indian hunter, (Nathaniel Arcand). Ginger goes back to the camp to find the old woman, but the hunter arrives before Ginger returns. The girls view him as a threat, until he releases Brigitte and leads them to Fort Bailey where they take refuge. Ginger claims they are the daughters of a trader who drowned, seeking passage East. The men there are suspicious of them, but the sisters are permitted to stay.

The fort has been under siege by werewolves for some time. The sisters are taken to the doctor, Murphy (Matthew Walker), who inspects Brigitte's wound. Murphy applies a leech, surreptitiously testing to see if a werewolf bit her. As nothing happens to her, Wallace (Tom McCamus) knows they're safe. The sisters are atill treated with suspicion, particularly by Reverand Gilbert (Hugh Dillon) who views the girls as temptation and harbingers of sin. They are given a room that once belonged to Wallace's son, Geoffrey, and informed that he is dead along with Wallace's Indian wife. There are toy wolves and soldiers in the room, set up to be fighting each other. That night Ginger is awakened by a voice and goes to investigate. Wandering the corridors, she eventually finds the source of the voice, and enters a small, bolted unlit room; reaching out to a deformed boy, who turns and bites her as he flees.

Ginger and Brigitte try to leave the fort but one of the men, James (J.R. Bourne), confronts them. While Ginger and James are fighting, werewolves attack, killing one of their men. The sisters are led by Rev. Gilbert to an allegedly safe building, which actually contains one of the wolves. The sisters run up the stairs with the wolf chasing them, but the hunter appears and kills it. As Ginger and Brigitte return to their room Ginger's nose begins to bleed; A sign that she is infected.

The sisters discover that the boy that bit Giner was Wallace's son Geoffrey, whom everyone believes to be dead. As Ginger sleeps he sneaks into the bedroom and wakes her. She tries to touch him, but he runs away, taking a lock of her hair. One of the men investigate the noise and is killed by Geoffrey. The others find the body with Ginger's lock of hair beside it and drag Ginger away while James holds Brigitte captive. Wallace arrives, dismisses James, and makes a deal with brigitte; her sister's life in exchange for their silence about his son. Wallace and Brigitte find Ginger at the doctor's office, strapped to an exam table and held at gunpoint, about to be tested with a leech. When Wallace demands they release Ginger, Murphy ignores the order and approaches Ginger with the leech. Wallace shoots him dead, prompting the other men to leave.

Ginger is determined to kill the boy to lift the curse but when she traps Geoffrey, he escapes and is then captured by the men. Wallace arrives and kills his son himself. The sisters' protection at an end, Ginger is forced to leave, and Brigitte goes with her. Desperate for a cure, the girls go to the hunter's cave, Ginger killing their guide shortly before they arrive. At the cave, the hunter and the Indian woman revealed the sisters' coming had long been prophesied and that the Red and the Black would decide the destiny of the werewolf bloodline. After Brigitte is put in a trance-like state, she has a vision of her destiny; she sees the hunter attempting to kill Ginger, and then kills her sister herself. As Brigitte emerges from the trance she finds the woman dead, killed by Ginger, who has fled. The hunter leads Brigitte back to the fort, assuring her that Ginger will return.

Back at the fort, Brigitte is taken prisoner. Gilbert goes to her, telling her to beg forgiveness to save her soul; Brigitte curses, spitting in his face. Gilbert drags her out onto the parade square, and prepares to burn her alive. He is interrupted by Wallace who runs him through with his sword before setting him on fire. James engages Ginger in a fight and she slashes his throat. As he falls to the ground, bleeding to death, Ginger opens the gates and ushers in the werewolves that attack and kill two of the men. Wallace is soon bitten and sets the fort on fire before killing himself. The hunter urges Brigitte to kill her sister, instead, she kills the hunter and flees with Ginger. The film ends with only Ginger and Brigitte left alive, huddled in the snow. Brigitte then holds out her hand and presses a cut on it against a cut on Ginger's hand, mixing their blood and infecting herself. As the screen fades, Brigitte's voice says, "The day of rekoning; the day the cure grew stronger in the Red and the Black. Sisters united in blood, together forever." 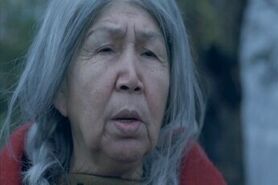 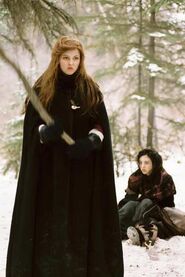 Ginger protects her sister from the hunter 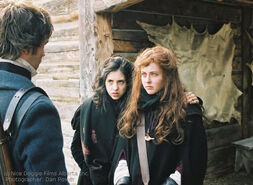 The girls are greeted by James 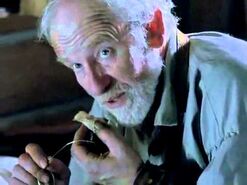 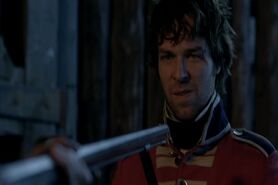 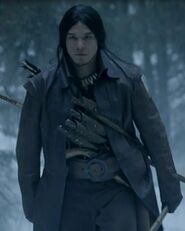 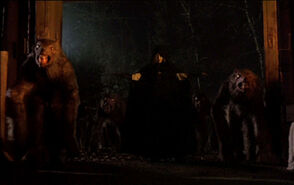 Ginger welcomes the wolves to finish off the soldiers
Add a photo to this gallery
Retrieved from "https://horror.fandom.com/wiki/Ginger_Snaps_Back:_The_Beginning?oldid=130803"
Community content is available under CC-BY-SA unless otherwise noted.