The Graboid is a fictional species of sandworm that acts as the primary antagonist of the Tremors film series.

The Graboid is based on the Mongolian Death Worm, a worm-like cryptid that purpotedly attacks animals, and possibly humans. Within the film world, it is store owned by Walter Chang who names them. Then only other person in the film to use the term Graboid is Val. In the second movie Earl recalls the name Graboid. 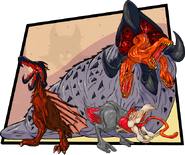 Add a photo to this gallery
Retrieved from "https://horror.fandom.com/wiki/Graboid_(Tremors)?oldid=117463"
Community content is available under CC-BY-SA unless otherwise noted.