Gremlins is a comedy horror film that was released in 1984 by Warner Bros. Pictures and Amblin Entertainment and directed by Joe Dante. This film was produced by Steven Spielberg and Michael Finnell, written by Chris Columbus.

Randall "Rand" Peltzer (Hoyt Axton) is an inventor struggling to market his unusual and problem-plagued household appliances, including the handheld "Bathroom Buddy". While searching for a Christmas present for his teenaged son Billy (Zach Galligan) in an old antique store in Chinatown, Randy comes across a small furry creature called a Mogwai which he tries to buy for his son. The owner of the store, Mr. Wing (Keye Luke) (addressed as "Grandfather" in this film, although his name is revealed in the second film), refuses to sell the Mogwai to Rand on the grounds that owning the Mogwai is too great a responsibility. As Rand is leaving the store, Mr. Wing's grandson (John Louie) sells Rand the creature on grounds that Mr. Wing was in need of money. The grandson then reminds Rand to follow three important instructions: never expose the Mogwai to bright lights (especially sunlight, which will kill it); never get it wet; and never feed it after midnight. Rand then takes the Mogwai, which he gives the name "Gizmo", to his family in the town of Kingston Falls.

The following morning Billy is late for work at the bank, so he and his dog Barney run to work. As Billy takes his place and hides Barney under the counter, Mrs. Deagle (Polly Holliday), who's in the process of foreclosing on property loans so she can sell the land to a chemical company, upbraids him for letting Barney destroy her expensive porcelain snowman. When Barney hears Mrs. Deagle speak of torturing him, he jumps on her, and Billy is almost fired.

That evening, Rand introduces Billy to Gizmo. Billy and Gizmo become friends; but when a glass of water is accidentally spilled on Gizmo, five more Mogwai emerge from Gizmo's back, who appear more mischievous than Gizmo. Gizmo -- the "white sheep" of this "family" -- seems disturbed by their asexual appearance, knowing what will happen. Billy is not initially bothered by the difference in personality. One of the Mogwai, dubbed Stripe for his white quiff of hair, acts as their leader. Billy takes a mogwai to his science teacher Mr Hanson, and shows how a drop of water causes a new Mogwai to emerge. After Billy takes Gizmo home, Hanson keeps the sixth Mogwai in the school science lab, where he conducts tests. Back at Billy's house, the new Mogwai sever the wires on the clock, thus tricking Billy into feeding them after midnight, whereupon they become encased in cocoons. At the school, the sixth Mogwai eats a sandwich left by Mr. Hanson, and it too enters its "pupal" state.

The next morning, the Mogwai emerge as gremlins -- reptilian creatures with sharp teeth and claws, who like nothing better than enjoying themselves in a chaotic and destructive fashion. They attack Gizmo (who had refused to eat after midnight so he is unchanged) and throw him inside a laundry chute. When the gremlins attack Mrs. Peltzer, she kills three of them -- grinding up one in a Peltzer food processor; stabbing another with a kitchen knife; and (duplicating the urban myth) exploding one in a microwave oven. Billy decapitates the fourth while it's attacking his mother. The survivor, Stripe, escapes to the YMCA swimming pool and leaps in, generating a multitude of gremlins who go on a rampage across the town, with numerous casualties. Among these are Mr. and Mrs. Futterman (it's revealed in the newscast at the end that they survived), two local policemen, and Mrs. Deagle, who's launched out of a window on a gremlin-sabotaged stair lift. Billy and Gizmo rescue Billy's girlfriend Kate Beringer (Phoebe Cates) when the gremlins overrun the tavern.

The three escape to the bank, which the gremlins have ransacked. Inside the bank, Kate complains that "Christmas is ruined again" (a previous Christmas being ruined when her father died attempting to come down a chimney disguised as Santa Claus). The gremlins' rampage pauses when they break into the movie theater to watch Snow White and the Seven Dwarfs, during which Billy, Kate, and Gizmo set off an explosion (using gas from the theater's heating system) to destroy the theater, killing all the gremlins -- except Stripe.

Stripe, having left to look for food, is followed by Billy into the local Montgomery Ward department store, wherein he confronts him in the garden department. Stripe leaps into a water fountain to create more gremlins, but Gizmo destroys him by opening the window blinds, exposing Stripe to sunlight. As the Peltzers recover from the rampage, Mr. Wing arrives to collect Gizmo, proclaiming that the western world is not ready for Mogwai. ("You teach him to watch television!") Before he leaves, Gizmo says goodbye to Billy and Mr. Wing says that someday Billy might be prepared to keep Gizmo, who will await him until then.

Rand ends the film, remarking "Well, that's the story. So if your air conditioner goes on the fritz or your washing machine blows up or your video recorder conks out, before you call the repairman, turn on all the lights, check all the closets and cupboards, look under all the beds, 'cause you never can tell. There just might be a gremlin in your house". 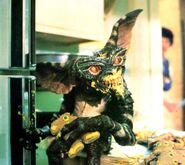 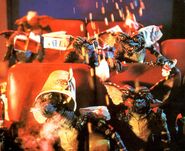 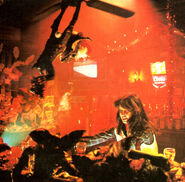 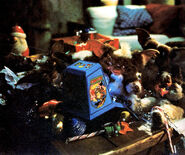 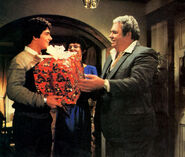 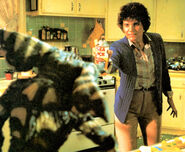 Retrieved from "https://horror.fandom.com/wiki/Gremlins?oldid=135189"
Community content is available under CC-BY-SA unless otherwise noted.