Gremlins 2: The New Batch is an American horror comedy film released in 1990 by Warner Bros. and the sequel to the 1984 film, Gremlins. It was directed by Joe Dante and written by Charles S. Haas, with creature designs by Rick Baker. It stars Zach Galligan, Phoebe Cates, John Glover, Robert Prosky, Haviland Morris, Dick Miller, Jackie Joseph, Robert Picardo and Christopher Lee; additionally, Frank Welker, who voiced Stripe in the first film, returns as another gremlin named Mohawk. The story continues the adventures of the creature Gizmo (once again voiced by Howie Mandel), who spawns numerous small monsters when wet. In the first film, Gizmo's offspring rampaged through a small fictional town. In Gremlins 2, Gizmo multiplies within a skyscraper in New York City. The new creatures thus pose a serious threat to the city should they be able to leave the building, and much of the story involves the human characters' efforts to prevent this disaster.

As with the first film, Gremlins 2 is a live action horror comedy film; however, Dante put effort into taking the sequel in new anarchic directions. The film is meant to be more cartoon-like than the darker original, and the violence is fairly slapstick. There are also a number of parodies of other films and stories, most notably Gremlins itself, as well as the Rambo films, The Wizard of Oz, Marathon Man and The Phantom of the Opera. As with the first film, critical response varied. Some critics who thought the first film was too dark gave Gremlins 2 better reviews, but it received a colder reception from fans who thought otherwise.

After the death of his owner Mr. Wing (Keye Luke), the mogwai Gizmo (voiced by Howie Mandel) becomes the guinea pig of the mad scientists working at Clamp Enterprises, an automatic state-of-the-art office building in Manhattan, run by the eccentric billionaire Daniel Clamp (John Glover). Seemingly at the mercy of the chief researcher Dr. Catheter (Christopher Lee), Gizmo reunites with his friend Billy Peltzer (Zach Galligan) and his fiancee Katie (Phoebe Cates), both who work at Clamp Enterprises. Clamp himself visits and quickly befriends Billy upon being impressed by his skills in concept design, also sparking the interest of Billy's superior Marla Bloodstone (Haviland Morris). Gizmo is left in the office and spawns a new batch of mogwai when he gets wet, including Mohawk (voiced by Frank Welker) who is the reincarnation of Stripe. The new batch eat after midnight and transform into Gremlins.

While Mohawk tortures Gizmo, the other Gremlins cause the fire sprinklers to go off in a cooking show's studio and spawn an army of Gremlins which quickly throw the building into chaos. Billy quickly comes up with an idea to lure the Gremlins outside into sunlight by covering the front of the building in a giant sheet depicting nighttime, Clamp personally escaping outside to lead the plan. The Gremlins invade the laboratory, one devouring a brain serum  and becoming the intelligent Brain Gremlin (Tony Randall) who plans to inject a genetic sunblock formula into the army so they can survive in sunlight. Other Gremlins devour serums and are genetically altered, including an electrical Gremlin which Billy traps in Clamp's answering machine. All the while "Grandpa Fred" (Robert Prosky) catches the chaos on camera, broadcasting it to the world; he dreams of being a proper anchorman but only works at Clamp Enterprises as the host of a late night horror show.

Murray Futterman (Dick Miller), Billy's neighbor from Kingston Falls and former victim of the Gremlin's antics, visits New York City with his wife Sheila (Jackie Joseph) and, upon encountering a Gremlin that consumed a bat serum, sneaks into the Clamp building to aid Billy. Billy, Dr. Catheter, and the chief of security Forster (Robert Picardo) team up to defeat the Gremlins, but Dr. Catheter is killed by the electric Gremlin and Forster is chased off by a female lovestruck Gremlin. Mohawk finishes torturing Gizmo and devours a spider serum, transforming into a monstrous half-Gremlin half-spider hybrid. He attacks Kate and Marla, but Gizmo (tired of being bullied by his nemesis) confronts Mohawk and kills him with an ignited bottle of white-out. Outside the building, a rainstorm frustrates Clamp's plan as the Gremlins gather in the building's foyer.

Billy formulates a second plan to kill the Gremlin army: having Mr. Futterman spray the army with water and then releasing the electrical Gremlin, electrocuting and killing all of the army including the Brain Gremlin. Clamp charges in with the police and press, but is so thrilled by the end result that he gives Billy, Katie, Fred and Marla promotions and hires Mr. Katsuji (Gedde Watanabe) as a cameraman. Forster calls Clamp where he is trapped inside a restroom in one of the higher levels of the building with the female Gremlin (the only survivor of the army). The female Gremlin approaches Forster in a wedding dress. Forster shrugs and resigns himself to his fate. 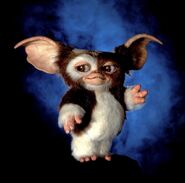 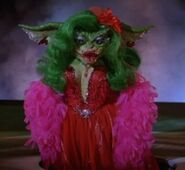 Retrieved from "https://horror.fandom.com/wiki/Gremlins_2:_The_New_Batch?oldid=135351"
Community content is available under CC-BY-SA unless otherwise noted.