Halloween III: Season of the Witch

Halloween 4: The Return of Michael Myers

Halloween III: Season of the Witch is a 1982 horror film and the third installment in the Halloween series. It is the only Halloween film that does not feature a plot revolving around the characters Michael Myers or Laurie Strode (or any relative of hers). Directed by Tommy Lee Wallace, the film stars Tom Atkins as Dr. Dan Challis, Stacey Nelkin as Ellie Grimbridge, and Dan O'Herlihy as Conal Cochran. The plot focuses on an investigation by Dan Challis and Ellie Grimbridge into the activities of Conal Cochran, the mysterious owner of the Silver Shamrock Novelties company, in the week approaching Halloween night.

Besides wholly abandoning the Michael Myers plotline, Halloween III departs from the slasher film genre which the original Halloween spawned in 1978. The focus on a psychopathic killer is replaced by a "mad scientist and witchcraft" theme. Moreover, the frequency of graphic violence and gore is less than that of Halloween II (1981), although scenes that depict the deaths of characters remain intense.

On Saturday, October 23, shop owner Harry Grimbridge is chased by mysterious figures wearing business suits. He collapses at a filling station clutching a Silver Shamrock jack-o'-lantern mask and is driven to the hospital by the filling station attendant all the while rantingfor a long time, "They're gonna kill us. All of us." Grimbridge is placed under the care of Dr. Daniel "Dan" Challis. While Grimbridge is hospitalized, another man in a suit enters his room and pulls his skull apart, killing him immediately. The man then enters his vehicle, douses himself with gasoline and lights himself on fire, causing the car to explode.

Challis, together with Grimbridge's daughter, Ellie, begins an investigation that leads them to the small town of Santa Mira, California, home of the Silver Shamrock Novelties factory. They learn from a hotel manager, Mr. Rafferty, that the source of the town's prosperity is Irishman Conal Cochran and his factory and that the majority of the town's population is made up of descendants of Irish immigrants. Challis learns that Ellie's father had stayed at the same hotel. Other guests of the hotel included shop owners Marge Guttman and the Kupfer family: Buddy, Betty and their son "Little" Buddy. All have business at the factory and eventually meet gruesome ends because of the Silver Shamrock masks.

A day after arriving in Santa Mira, Challis and Ellie tour the Silver Shamrock factory with the Kupfers and are alarmed to discover Grimbridge's car in a storage building guarded by more men dressed in suits. They return to their hotel but find that they cannot contact anyone outside Santa Mira. Ellie is kidnapped by the men in suits from the factory, and in an attempt to locate her, Challis breaks into the factory. There he discovers that the men in suits are actually androids created by Cochran. Although Challis succeeds in neutralizing one of the androids, he is captured by the others, and Cochran reveals his plan to kill children on Halloween night. He explains that the Silver Shamrock trademark on the masks contain a computer chip embedded with a small fragment of a five ton sacrificial stone stolen from Stonehenge. When the Silver Shamrock television commercial airs on Halloween night, the chip will activate the masks, causing the wearers' heads to dissolve and spew insects and snakes. Cochran further explains that he is attempting to resurrect the more macabre aspects of the Celtic festival, Samhain, which he connects to witchcraft.

Challis escapes from the cell Cochran leaves him in, rescues an unusually passive Ellie, and manages to sabotage Cochran's computers. The computers and the standing stone form a magic circle; Cochran politely applauds his opponent before the circle's energy discharges through him and vaporized him. Challis flees as the factory is consumed in the chain reaction, but discovers that the "Ellie" he has saved is another android. He destroys it and makes his way to the same filling station where Ellie's father had come eight days earlier. Challis contacts the television stations and convinces all but one of the station managers to remove the commercial. The film ends with Challis screaming into the telephone, "Turn it off! Stop it! STOP IT!!" It is implied that all the children (including Challis's) watching the commercial at that moment are killed, even though Cochran did not survive.

Produced on a budget of $2.5 million and hoped to be a commercial success, Halloween III grossed a mere $14.4 million at the box office in the United States,[1] making it the poorest performing film in the Halloween series at the time.[2] In addition to weak box office returns, most critics gave the film negative reviews. Where Halloween had broken new ground and was imitated by many genre films following in its wake,[3] this third installment seemed hackneyed to many: one critic twenty years later suggests that if Halloween III was not part of the Halloween series, then it would simply be "a fairly nondescript eighties horror flick, no worse and no better than many others."[4] Cultural and film historians read significance into the film's plot, linking it to critiques of large corporations and American consumerism. 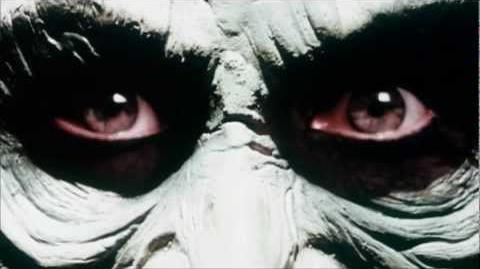 Retrieved from "https://horror.fandom.com/wiki/Halloween_III:_Season_of_the_Witch?oldid=148378"
Community content is available under CC-BY-SA unless otherwise noted.