Hellraiser is a 1987 British horror film exploring the themes of sadomasochism, pain as a source of pleasure, and morality under duress and fear. It is based on the critically acclaimed novella The Hellbound Heart by Clive Barker, who also wrote the screenplay and directed the film. In the UK, the film is titled Clive Barker's Hellraiser. It is the first film in the Hellraiser series. Nine subsequent sequels have followed.

Somewhere in Morocco, an impulsive and violent man named Frank Cotton (Sean Chapman) purchases an antique puzzle box from a dealer (James Hong). Back at his house in London, England, Frank solves the puzzle box and hooked chains immediately fly out of the box and tear into his flesh. Demons called Cenobites from another realm appear to inspect Frank's remains. Their leader, "Pinhead", (Doug Bradley) picks up the box and twists it back into its original state, and the room also returns to normal.

Frank's brother Larry (Andrew Robinson) soon moves into Frank's abandoned house with his second wife, Julia (Clare Higgins), who previously had an affair with Frank. They assume that Frank is off on one of his nefarious adventures. Larry's teenage daughter, Kirsty Cotton (Ashley Laurence), chooses not to live with her stepmother and moves into her own place. After cutting his hand on a nail (while moving a mattress), Larry goes upstairs to the room where Frank was killed and his blood falls on the floor. It mysteriously disappears through the floorboards, and Frank's soul uses this blood as nourishment to partially regenerate his body. Later, Frank (Oliver Smith) convinces Julia to help restore him to his full physical form. Julia succumbs to Frank's entreaties and agrees to help him by seducing men and luring them up to the empty attic where Frank hides. After having Julia murder them, Frank drains them of their blood, which allows him to further regenerate his body. Frank tells Julia about the puzzle box (which he still possesses) and explains that by reclaiming his body he has broken his deal with the Cenobites. He wants to restore himself and then leave with Julia before the Cenobites find him.

Kirsty eventually catches Julia bringing a strange man home and sneaks into the house to investigate. In the attic Julia bludgeons the man, allowing Frank to feast on his body. Kirsty approaches the attic unaware of what's happening within. Suddenly, the bloody man stumbles out of the attic, soon followed by the skinless Frank who confronts Kirsty. Before Frank can grab her, Kirsty seizes the puzzle box. When she realizes it holds value for Frank, she throws it out the window and escapes from the house, picking up the box off the ground as she flees. A disoriented Kirsty collapses in the street and awakens in the hospital. She tells herself it all was a terrible dream, until the doctors hand her the puzzle box. Kirsty begins to play with the puzzle box and it tricks her into solving it. The walls of her hospital room open a dimensional door and Kirsty encounters the Cenobites. Pinhead tells Kirsty that she has summoned them, and therefore they must take her to Hell. She begs them to spare her, offering to lead them to Frank in exchange for her freedom. The Cenobites warn her against attempting deception, with Pinhead uttering his famous line "we'll tear your soul apart."

Kirsty escapes the hospital and races to her father's home to warn him about Frank. Larry informs Kirsty that Frank has been taken care of, and Julia shows Kirsty a bloody body in the attic. The Cenobites reappear, demanding the man responsible for this death. Kirsty believes they want her father and she runs to warn him. However, she soon realizes that Frank has murdered her father and stolen his skin and worn it like a suit to fool Kirsty into believing that he was her father.

Frank (now as Andrew Robinson) attacks Kirsty, accidentally stabbing Julia in the process. Frank then drains Julia of her blood, further nourishing himself. He goes to the attic where Kirsty is hiding. Kirsty weeps and accuses Frank of murdering her father. Frank is unrepentant, telling Kirsty her father was already dead inside, and besides it was inevitable anyway. Having heard Frank's confession, the Cenobites appear.

Frank tries to kill Kirsty for setting him up, but a hooked chain flies through the air and snares his hand, pulling him back into the room. Dozens of these chains fly though the air and hook themselves into his flesh as he screams in agony, and hold him transfixed like a fly in a spider's web. His screams subside, and looking at Kirsty, says "Jesus wept" before the chains tear him apart. Kirsty runs through the house, eager to escape, but the Cenobites want her as well. Kirsty finds the puzzle box clutched in the hands of Julia's corpse. One by one she banishes the Cenobites back to their realm by reversing the solution to the puzzle box.

Afterwards, Kirsty tries to burn the box in a fire outdoors, but a strange man appears and picks it out of the flames. As the man is consumed by the flames he transforms into a winged, skeletal creature that flies away into the night. In the final scene, the box is shown in the hands of the merchant who originally sold it to Frank, asking another prospective customer (?), "What's your pleasure, sir?" 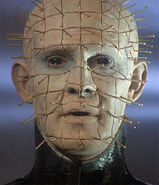 Having been dismayed at prior cinematic adaptations of his work, Barker decided to attempt to direct a film himself. Christopher Figg agreed to produce and New World Pictures agreed to fund the film for $900,000.

Hellraiser was filmed at the end of 1986 and was set to be made in seven weeks, but was extended over a nine- to ten-week period by New World. The film was originally made under the working title of Sadomasochists from Beyond the Grave. Barker also wanted to call the film Hellbound but producer Christopher Figg suggested Hellraiser instead. Barker spoke fondly in The Hellraiser Chronicles about the filming, stating that his memories of production were of "unalloyed fondness ... The cast treated my ineptitudes kindly, and the crew were no less forgiving." Barker admitted his own lack of knowledge on filmmaking, stating that he "didn't know the difference between a 10-millimetre lens and a 35-millimetre lens. If you'd shown me a plate of spaghetti and said that was a lens, I might have believed you." After filming, New World convinced Barker to relocate the story to the United States which required overdubbing to remove some British accents.

During production, Doug Bradley had trouble hitting his marks during his takes in make-up as he could not see through his black contact lenses and was afraid of tripping over Pinhead's skirts. The special effects of the unnamed creature, known as "The Engineer" in the novels, proved difficult as the creature was difficult to manoeuvre. Other issues included a rushed shoot of the Chinese restaurant scene with Kirsty and Larry, due to the lateness of the person responsible for letting the cast and crew into the establishment.

The film had two editors: Richard Marden and an uncredited Tony Randel. Barker originally wanted the electronic music group Coil to perform the music for the film, but that notion was rejected by New World. Editor Tony Randel then suggested Christopher Young as a replacement for Coil for the film's score. Young had previously composed scores for other horror films such as the 1985 slasher A Nightmare on Elm Street 2: Freddy's Revenge and the 1986 Tobe Hooper film Invaders from Mars.

Retrieved from "https://horror.fandom.com/wiki/Hellraiser_(1987)?oldid=143091"
Community content is available under CC-BY-SA unless otherwise noted.