I Know What You Did Last Summer

I Still Know What You Did Last Summer

I Know What You Did Last Summer is a 1997 American slasher film based on the 1973 novel of the same name by Lois Duncan. The film changes many aspects of the book, which was not a slasher novel. The film also draws inspiration from the urban legend known as The Hook.

Four young friends bound by a tragic accident are reunited when they find themselves being stalked by a hook-wielding maniac in their small seaside town.

Warning: this text contains details about the plot/ending of the film.
The night of their high school graduation, Julie, Helen, Barry, and Ray go out to the beach to celebrate. Returning in Barry's new car, they hit and apparently kill a man. While thinking what to do, Julie's friend Max arrives. Julie tells him everything is fine so he leaves.They dump the corpse in the ocean and agree to never discuss again what had happened. One year later Julie is returning home from college. She has not spoken with Helen, Barry or Ray since the accident. Julie receives a letter, that reads "I KNOW WHAT YOU DID LAST SUMMER!" Julie goes to see Helen's sister Elsa, who tells Julie that Helen has been working there. Julie shows Helen the letter and they decide to visit Barry. After going over the incident, Barry accuses Max. The three of them go to see Max, but Barry insists on going in the factory alone. Barry persuades Max to go into the back room and attacks him, telling Max he should keep his mouth shut. Julie finds Ray working on the docks. Ray tries to make up with Julie but she runs off. Inside the factory Max is murdered by someone wielding a hook. The killer attacks Barry next, running him over with Barry's car. The killer is shown wearing a raincoat and wielding a hook on one hand.

Julie arrives at the hospital to see Barry and finds Helen and Ray there. Julie reveals the man they hit was named David Eagen. Helen and Julie track his sister, Missy, to her home, where she has been living since her brother's death. Missy does not recognise them and Julie is convinced she is innocent. Missy tells them she had a visit from a man claiming to be David's friend named Billy Blue.

At Helen's home that night, the killer breaks in, hiding in her closet. The next morning Helen wakes up with most of her hair cut to bits and "SOON" written in lipstick on her mirror. Julie gets a call from Barry, who tells her to come to Helen's. On the way, Julie hears rattling in her trunk. She opens the trunk to find Max's body. She shuts the trunk, runs to Helen's and brings her and Barry to her car, but the body has disappeared. Julie is convinced the killer took the body and they are not safe. Later they run into Ray, who tells them he got a letter. Julie decides to see Missy again while Helen and Barry watch each other's backs at the parade. Julie tries to convince Missy that David did not kill himself after Missy presents her with a suicide note written in the same style as her letter from the killer. Missy tells Julie to leave.

At the Croaker pageant, Helen sees Barry being murdered by the killer. However, neither the killer nor the body are found afterwards. A police officer drives her home, but the killer lures the cop into an alley and kills him. Helen runs to her store where Elsa is working, but the killer finds and murders Elsa. He then chases Helen into the attic where she jumps out of the window into the dumpster. Dazed Helen looks up at the window but no one is there. Helen flees through the back alleys to the roaring parade but hears a noise and turns to look. Helen then turns around when the killer shoves her into a stack of tires and slashers her to death.

Julie learns, that the killer is Ben Willis, a fisherman. He murdered David Egan after David and Ben's daughter Susie were involved in a car crash near where the four teenagers hit Ben. Susie was killed in the accident and David was unharmed. Ben blamed David and killed him a year later, making it look like a suicide. On the way home Ben was hit by the group, not David.

Julie goes to see Ray on his boat and tells him the story, but he does not believe her. Julie notices the name on his boat is "Billy Blue" and accuses him of the murders, which he denies. When Julie runs away, Ray tries to chase after her but is knocked unconscious by a man who tells Julie to get on his boat. After she does, she learns he is Ben Willis. She is chased all over the boat while Ray regains consciousness and steals a boat to save Julie. In a room full of ice, Julie finds Helen and Barry's bodies. Ray climbs aboard and is almost killed by Ben, but is caught in the boat's net. He climbs back aboard and saves Julie. Ben gets his hand caught in a rope and Ray hoists him into the air where his hand is cut off and he falls into the ocean. On land, Ray tells Julie the reason he went to see Missy was, because he was guilty and had to know, who they hit. He tells her he loves her and they embrace. Ben's body is not recovered.

A year later, Julie is in her second year and is going on a trip to New York with Ray. She receives a letter resembling the one she had got from Ben, but it only contains a pool party invitation. Julie returns to the bathroom, which has filled with steam. On the shower door, "I STILL KNOW" is written. Ben jumps through the shower door, attacking her.

Kevin Williamson's screenplay was purchased before his screenplay for the film Scream. It was only after Scream's success that producers rushed Williamson's screenplay for I Know What You Did Last Summer into production. Scottish director Jim Gillespie was hired by producer Neal H. Moritz to make his debut feature film on the strength of his 10-minute short film "Joyride". The film was shot in Southport, North Carolina, which also served as the film's setting.

The film received mostly mixed reviews from critics. On Rotten Tomatoes, 36% of comments were positive. In another review, Metacritic reported an aggregate score of 52 out of 100. Critic Roger Ebert wrote in his review, "The best shot in this film is the first one. Not a good sign."Jennifer Love Hewitt was praised for her performance as Julie James by an Entertainment Weekly columnist stating that Hewitt knows how to scream with soul. 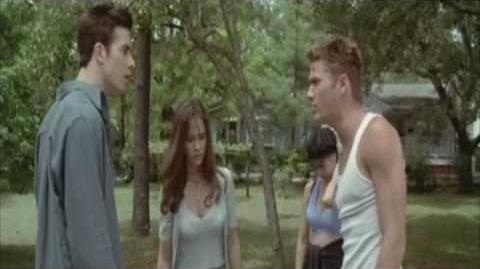 Retrieved from "https://horror.fandom.com/wiki/I_Know_What_You_Did_Last_Summer_(1997)?oldid=143467"
Community content is available under CC-BY-SA unless otherwise noted.