This page needs improvement. It can be improved by: quote, pictures, information/trivia

I Still Know What You Did Last Summer

I Know What You Did Last Summer

I'll Always Know What You Did Last Summer

I Still Know What You Did Last Summer is a 1998 slasher film and sequel to the 1997 film I Know What You Did Last Summer. The screenplaywas written by Trey Callaway, based on characters originally created in a popular novel by Lois Duncan. Callaway's script was published in an edited "young adult" format, leaving in all descriptions of violence but omitting the harsher language.

On August 15, 2006, Columbia Pictures released I'll Always Know What You Did Last Summer as a straight-to-video sequel to the film which features no returning cast members. The film was released on Blu-Ray on July 14, 2009.

The murderous fisherman with a hook is back to once again stalk the two surviving teens, Julie and Ray, who had left him for dead, as well as cause even more murder and mayhem, this time at a posh island resort.

Julie James wakes up screaming in her college class from a dream involving the terrifying, vengeful fisherman, Ben Willis. Julie is attending summer classes in Boston, in avoidance of returning to her hometown of Southport. All the while, she suffers from the painful memories and nightmares, trying to cope with the accident and brutal murders of her friends, Helen Shivers and Barry Cox, from the summer before. Julie’s friend and roommate, Karla Wilson, receives a phone call from a local radio station, asking her to participate in a contest to win an all-expenses-paid vacation to the Bahamas for the Fourth of July weekend. The contest is that Karla must guess the capital of Brazil. Her answer is “Rio de Janeiro”. The radio host tells her she is right (despite the fact that the correct answer is Brasilia) and she is given four tickets for the trip. Julie invites her boyfriend, Ray, but he declines. He is hurt by her earlier refusal to visit him in Southport, but is able to go away with her college friends. It is revealed that Ray plans to propose to Julie, and he changes his mind about the trip, planning to show up as a surprise.

That evening, Ray and his co-worker, Dave, drive to Boston to meet Julie. On the way, they stop due to a car in the middle of the road. As Ray gets out to inspect the scene, Ben Willis appears and impales Dave through the mouth with his hook. Ben Willis takes Ray’s truck and chases him down the road. Ray manages to get away, but is injured from falling down a hill.

The next morning, Julie is waiting outside her apartment for Ray to show up, but Karla convinces her that he is blowing her off. At that moment, Tyrell, Karla’s boyfriend, arrives in his Jeep with their friend, Will Benson. Knowing Will has a crush on Julie, Karla explains to Julie that she didn’t want her fourth ticket to go to waste, so she invited Will. Julie is not thrilled about Will going, but gets in the car anyway.

As the group arrives in the Bahamas, on the island of Tower Bay, they find that other guests are leaving due to the fact that hurricane season has begun. As they are shown up to their rooms, much to her surprise, Julie finds that she is sharing her room with Will. That evening, the group heads to the hotel’s bar, Julie is talked into singing karaoke. She sings along at first, but immediately stops when the words, “I STILL KNOW WHAT YOU DID LAST SUMMER” roll onto the screen. Terrified, she leaves the group and runs back to her room and is soon met by Will who laid out a surprise for her including flowers and a love note. Julie takes a shower after she kindly sidesteps Will's affection for her while Tyrell and Karla (and soon-after Will) decide to get into the hot tub. While Julie is in the bathroom, she notices that her toothbrush has gone missing. Feeling something is wrong, she searches the room and finds Darick, the dockhand, hanging dead in the closet after Ben Willis slashed his head with his hook. After this gruesome discovery she runs out and grabs Tyrell, Karla, and Will and with the hotel manager present, they search the room, but there are no signs of Darick. The hotel manager does not believe her story and Julie attempts to call the cops, but finds that the phone lines are dead due to incoming hurricane. The group and the hotel staff prepare for storm. Meanwhile, Ben Willis makes his way into the hotel and kills the maid, Olga by slicing her cheek and stabbing her in the back with his hook. Later on, the poolboy Titus Telsco was the next victim to Ben when he impales Titus with a pair of garden shears after pinning his hand with his hook.

The following day, the group finds that members of the hotel staff and the manager have been murdered and that the two-way radio, their only way of contact, has been destroyed. Isolated, Julie is forced to tell the others about the previous summer. Karla feels betrayed by this because she wished that Julie had told her sooner. Will comforts her and believes Julie had her own reasons to protect her. Tyrell then suspects that Estes, the boat hand porter, is the murderer, since he is the only one who cannot be found. The group goes to Estes’ apartment, searching for clues. While there, they find Julie’s missing toothbrush and Karla’s hair tie, concluding Estes has been using voodoo to protect them. Estes appears and states the capital of Brazil is not Rio, revealing that the trip has been a set-up. He then leads the group to a graveyard in the forest where they find two graves of Ben Willis’ wife and daughter. There is also an empty grave and tombstone with Julie’s name. Estes explains that Ben Willis once was married to his wife, Sarah, and had two children, a son, Will, and a daughter, Susan. Ben murdered Sarah in the hotel room that Julie is staying in when he found out about her affair and her plans to leave him with their children. In anger, Julie shouts that she will not be killed by Ben and that they will fight against him. At that moment, the group notices that Estes has gone missing, but Will volunteers to go find him. Julie, Karla, and Tyrell head back to hotel to gather supplies to defend themselves. They head to the kitchen to find something to eat, and find Nancy, the hotel bartender, hiding in the freezer. Meanwhile, Will finds Estes to help them but he attacks Will while Ray takes a boat to the island. Meanwhile, the fisherman appears in the kitchen and kills Tyrell, stabbing his hook through Tyrell’s throat. The girls are then chased to the hotel attic, where Karla is attacked by Ben and they both fall through the attic to the hotel bedroom below. After a brief struggle, Karla runs from the hotel room and jumps onto the greenhouse below. Julie and Nancy are able to rescue Karla just in time and run to the storm cellar to take refuge. Nancy turns on the light and they find that the storm cellar is storage for all of the dead bodies. Suddenly, Will bursts in and convinces the girls to head back to the hotel, stating that he saw the fisherman out on the beach.

Back at the hotel, Julie sees that Will is bleeding from his stomach, so Nancy takes Karla to find a First Aid kit. While retrieving the kit, Nancy and Karla find Estes has been stabbed with a harpoon spear and is slowly dying and falls on top of Nancy. Ben Willis appears and impales Nancy to Estes, and presumably kills Karla as well. Back in the lobby, Julie is tending to Will, unable to find a wound in which the blood is coming from. Will states that she cannot find a wound because it is not his blood. It is then that Will asks Julie what her favorite radio station is, revealing he was the radio host caller. Will grabs her and drags her to the graveyard in the forest. Julie cries and asks him why he is doing all of this, to which Will states his name is Will Benson, Benson = Ben’s son. Ben Willis appears and confirms that Will is his child and attempts to murder Julie, when Ray shows up. Ray is attacked by Will, and a fight ensues. Just as Ben is about to stab Ray, Ray moves and Ben inadvertently stabs and kills Will. While Ben shouts in anger from killing his own son, Julie fires a gun, shooting Ben in the chest. Ben then falls dead into the empty grave made for Julie. Ray comforts Julie now that he is dead. Back at the hotel, Karla is found alive and the three are rescued by the Coast Guard. Sometime later, Ray and Julie have married and are in their newly purchased home. Ray is brushing his teeth before bed and Julie is in their bedroom. She hears a noise and searches the house. Finding nothing out of place, she returns to her room, convincing herself that she’s fine. The bathroom door has been quietly shut and locked, while Ray is occupied. Julie sits down on her bed and looks into her mirror, noticing Ben Willis under it. She screams in horror but the fisherman grabs her foot with his hook and pulls her under the bed and seemingly kills her.

While the film is set in The Bahamas, it was actually shot at El Tecuan Marina Resort Costalagree in Jalisco, Mexico, Los Angeles and Sony Pictures Studios in Culver City, California.

The sequel grossed $16.5 million at 2,443 theaters during its opening weekend. Unlike the original, the sequel opened at number two at the box office and dropped to number five only a week later. At the end of its fifteen-week run, the film grossed $40,020,622 in the United States. It grossed $44 million internationally, bringing the total worldwide gross to $84 million.

The film holds a rating of 7% on Rotten Tomatoes with critics consensus being "Boring, predictable, and bereft of thrills or chills, I Still Know What You Did Last Summer is exactly the kind of rehash that gives horror sequels a bad name". It also has a 21 score on Metacritic compared to 52 for the original. The highest review score on Metacritic was 60 which came from Variety, who said "Purists will find the pic's obviousness disappointing, but there's no question that the film delivers a sufficient shock quotient to satisfy its youthful target audience". 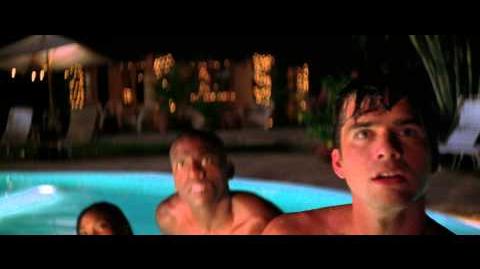 I Still Know What You Did Last Summer - Trailer

Retrieved from "https://horror.fandom.com/wiki/I_Still_Know_What_You_Did_Last_Summer_(1998)?oldid=140184"
Community content is available under CC-BY-SA unless otherwise noted.