This page needs improvement. It can be improved by: quote, pictures, information/trivia

Insidious: Chapter 2 is a 2013 horror film directed by James Wan and is the sequel to 2011's Insidious. The film follows a husband and wife who seek to uncover the secret that has left them dangerously connected to the spirit world.

The Lamberts believe that they have defeated the spirits that have haunted their family, but they soon discover that evil is not beaten so easily.

In 1986, a medium named Carl calls upon his friend Elise to help discover what is haunting Lorraine Lambert's son, Josh. After hypnotizing Josh, Elise attempts to find the location of Josh's "friend" (an old woman who appears in photographs of Josh) through playing Hot or Cold. After warnings from Josh, Elise makes her way to his bedroom closet and is scratched along the arm. As a result, Lorraine, Carl, and Elise agree that making Josh forget his astral projection abilities is the best thing to do.

Twenty-five years later, Josh's wife Renai is under questioning by a police detective about the death of Elise. Unsettled by the theory that her husband is a killer, Renai rejoins with her family as they relocate to Lorraine's house. As everyone goes to bed, Renai begins witnessing strange occurrences throughout the house such as the piano playing by itself when Renai is not in the room. Josh, who is suspected by Renai to be inhabited by the old woman, tells her not to worry and that everything will be okay.

The next day, Renai sees a woman wearing a white dress sitting in the living room. Following the cries of her baby throughout the house, Renai comes face-to-face with the woman in white and is knocked unconscious. During this time, Lorraine visits Elise's colleagues Specs and Tucker to seek an explanation behind the strange events. In doing so, they call upon Carl, who listens to Lorraine's story and attempts to contact Elise on the other side using word-dice. Through the dice, they are told to find answers at the "Our Lady of Angels" hospital (the former workplace of Lorraine). Led through the hospital to the ICU, Lorraine recounts a story of a patient named Parker Crane, who committed suicide by jumping off the roof many years ago. The four decide that Elise is leading them to this man's house. After breaking into Parker's home, they find a black gown and veil as well as newspaper clippings about a man referred to as "The Dark Bride" who kidnapped and murdered several people while dressed as a woman. It is then revealed to them that it was not Elise speaking through the dice, but actually Parker's mother.

After Renai recovers with Josh at her side, Lorraine arrives home and insists that she, Renai, and the kids get away from Josh. In the car, she explains the origin of "The Bride In Black" and the theory that the real Josh is trapped in the Further. At this same moment, Carl arrives at the house to drug the possessed Josh while Specs and Tucker monitor from their van parked outside. The plan fails, however, and Josh incapacitates Carl, Specs and Tucker. After receiving a message saying everything is okay, Lorraine and Renai return to the house only to be ambushed by Josh. Locking Lorraine in the closet, Josh attempts to choke Renai but is knocked over the head with a bat by Dalton, who has returned home with Foster. Renai and the children then escape to the basement where they barricade themselves in the laundry room. Lying down in a corner with a tin can telephone, Dalton falls asleep and returns to the Further to rescue his father. Simultaneously, Josh begins making his way into the room by hammering through the drywall.

Meanwhile, in the Further, the real Josh stumbles upon Carl and the two look for Elise, finding her at the Lamberts' previous home. The three then proceed to Parker's house where they witness his mother, the woman in white, abusing him as a child in attempt to convince him that he is a girl. The mother notices the group observing and locks Carl and Elise out of the room. When Josh turns around, the room is dark and filled with standing bodies covered by sheets. Upon finding Parker's mother amongst the bodies, the two engage in a fight. Just as the mother is about to choke Josh to death, Elise enters the room with the help of young Parker and saves Josh by hitting the mother from behind with a rocking horse. After the three escape the house, they are met up by Dalton who assists Carl and Josh in returning to real time by following the string from the tin can telephone.

Josh, who collapsed in real time after Parker's mother was hit by the rocking horse, and Dalton wake up as themselves, a feeling of relief encompasses the room. Carl then hypnotizes Dalton and Josh to forget their astral projection abilities and everything that happened with it. The screen fades to white and Specs and Tucker are shown knocking on the door to another home. As they speak with the parents of the house about their daughter Allison, Elise walks in to speak to a comatose Allison. A creaking noise and shadow rises behind the girl just as Elise shockingly exclaims, "Oh my God". 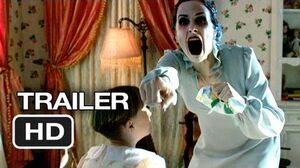 Retrieved from "https://horror.fandom.com/wiki/Insidious:_Chapter_2_(2013)?oldid=128535"
Community content is available under CC-BY-SA unless otherwise noted.