Jason Goes to Hell: The Final Friday is a 1993 slasher film. Like Friday the 13th: The Final Chapter, it was not the final film in the series with the release of Jason X and Freddy vs Jason, but was originally intended to be.

It is the first Friday the 13th film to be distributed under New Line Cinema. Paramount (the original distributor) sold the rights to New Line after continual declines in box office ratings.

Through unexplained resurrection, the undead serial killer/assassin Jason Voorhees is back at Crystal Lake and on the hunt again, but this time the brutal killer is on the wrong end of an FBI sting. As he's about to kill a woman (undercover FBI agent Elizabeth Marcus), the FBI springs a trap. After gunning him down, they launch an explosive, and Jason gets blown to pieces. His grisly remains are sent to a morgue, where the coroner Phil is hypnotized by Jason's beating black heart and begins to eat it, causing himself to be possessed by the demonic spirit of Jason. He then proceeds to kill the Coroner's Assistant and a pair of FBI agents.

As the dark spirit jumps from host to host via a parasitic snakelike demon, it is revealed by bounty hunter Creighton Duke that only members of Jason's bloodline can truly kill him and he'll return to life if he's killed by someone outside of his family. The only living relatives of Jason are his half-sister Diana Kimble, her daughter Jessica, and Stephanie, the infant daughter of Jessica and the main protagonist Steven Freeman. His attempts to warn Diana, however, result in him getting arrested for harassment.

Jason kidnaps policeman Josh after killing three Crystal Lake campers and his wife Edna, and takes him to the Voorhees house, where he shaves Josh and transfers his heart into his body via the mouth. Jason makes his way to Diana's house. Diana shoots Jason in the head, but it is no use. Steven, having been asked to meet Diana at the house, bursts in and stabs Jason with a fireplace poker. Diana is killed with a knife sharpener and Jason escapes. Steven is falsely accused and arrested for Diana's murder, and meets Duke, who reveals Jessica's relation to Jason, and that Jason could be possessing anyone to get to Jessica or Stephanie, whom he needs to recreate his body. Determined to get to Jessica before Jason does, Steven escapes from jail, with the reluctant help of Officer Randy Parker, a friend of his.

Meanwhile, Jessica is dating American Casefiles reporter Robert Campbell. Steven goes to the Voorhees house to find evidence to convince Jessica, but falls through rotten boards. Robert enters the upstairs room, and receives a phone call, during which he reveals that he is attempting to "spice up" his show's ratings by putting emphasis on Jason's return from death, having stolen Diana's body from the morgue for this reason. Jason bursts in and transfers his heart into Robert. Josh, due to being possessed by Jason, melts into a puddle of flesh and blood. Jason leaves, with Steven in pursuit. Jason attempts to be reborn through Jessica at her mother's house, but is disrupted by Steven, who hits him and takes Jessica into his car. Steven proceeds to run over Jason and explain the situation to Jessica, who does not believe him and literally throws him out of the car. Jessica makes it to the police station, where she is dressed and comforted by Ed Landis, the town's sheriff and her mother's boyfriend, and the other cops present. Confronted by Randy, Steven initially resists arrest, but quickly gives in upon discovering Jessica's location.

Jason arrives at the police station and goes on a rampage, killing several police officers and nearly possessing Jessica before Steven arrives and stops him; with these events, Jessica realizes that Steven's story is true. In the chaos, Duke makes his own escape. The two make their way to Joey B.'s diner to grab the baby, but are unexpectedly held at gunpoint by Joey, who still believes that Steven killed Diana. All hostilities towards them are ceased, however, when Jason arrives. Though they put up a valiant fight with their variety of weapons, the rowdy comic relief waiting staff is unable to stop Jason, and most of them are brutally murdered (including Joey). Running to the back, Jessica and Steven discover a note from Duke, telling them that he has the baby and ordering Jessica to meet him at the Voorhees house alone. Suddenly, Jason crashes through the wall and grabs Jessica only to be attacked by Vicki, who impales him with a barbecue skewer. Unaffected, Jason proceeds to impale Vicki on the skewer and crush her skull with his bare hands, appearing to die afterwards, all with a sadistic smile on his face.

Departing alone, Jessica meets up with Duke at the Voorhees house, and is given a mystical dagger (the dagger is the Skull Dagger from the Evil Dead franchise. This, along with a cameo appearance by the Necronomicon hints at a link between Friday The 13th and the Evil Dead films.) which she can use to permanently kill Jason. Meanwhile, an unseen officer makes his way into the diner, discovering the bodies, except for Robert's, which (possessed) leaps from the closet, and transfers his heart into the unseen officer's body (offscreen). Duke falls through the floor, and Jessica is confronted by Landis and Randy, who both survived, but one of them is possessed. Landis accidentally stabs himself with the dagger and Jessica drops it underneath a dresser. Randy, being the officer possessed, attempts to be reborn through Stephanie, but Steven arrives and severs his neck with a machete. Jason's heart, which has now grown into a demonic infant, crawls out of Randy's neck, and makes its way into the basement, where it crawls into Diana's dead body while Steven and Jessica pull the injured Duke out of the basement. Complete with work suit and hockey mask, Jason is reborn, and wastes no time in attacking the trio.

While Steven and Jessica attempt to retrieve the dagger, Duke distracts Jason: in response, Jason grabs him in a bear hug, crushing his back and killing him before turning his attention to Jessica. Enraged, Steven tackles Jason, sending both men flying out a window. While Jessica retrieves the dagger, Steven engages Jason in hand to hand combat, which is mostly dominated by the latter. Jason brutally beats Steven with both a rake and a shovel and throws him into a jungle gym, which he proceeds to overturn. Just as Jason moves in for the coup de grace, Jessica appears and stabs him in the chest with the dagger, releasing the tortured souls that Jason has accumulated throughout his killing spree. Numerous demonic hands burst out of the ground and pull the struggling Jason into the depths of hell. Jason attempts to take Steven down with him, but Jessica saves him.

Steven and Jessica reconcile and walk off into the sunrise with their baby. After they depart, Jason's mask is unearthed by a dog. Suddenly, Freddy Krueger's clawed glove bursts out of the ground, grabs Jason's mask, and drags it to Hell with him, laughing evilly, setting in motion the events of Freddy vs. Jason.

One early concept for this movie was "Jason Goes To L.A" in which two rival gangs would be fighting; when Jason would show up and start murdering them. This would force the rival gangs to band together to defeat Jason. 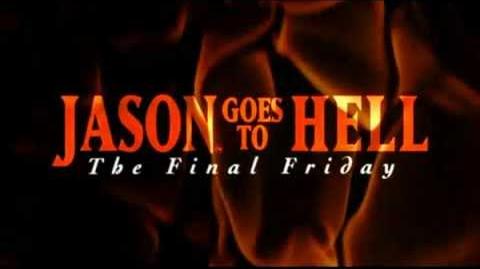 Retrieved from "https://horror.fandom.com/wiki/Jason_Goes_to_Hell:_The_Final_Friday?oldid=131722"
Community content is available under CC-BY-SA unless otherwise noted.