Jason X is a 2001 science fiction/slasher film, and the tenth in the Friday the 13th film series, starring Kane Hodder as the undead mass murderer Jason Voorhees. The film made $16,951,798 worldwide. Thus far, it is the last appearance of Kane Hodder in the role of Jason Voorhees.

The film was conceived by Todd Farmer and was the only pitch he gave to the studio for the movie, having suggested sending Jason into space as means to advance the franchise while Freddy vs. Jason was still in development hell.

The time is the near future. A team of government scientists working at the Crystal Lake Research Facility have finally captured the notorious and seemingly indestructible killer Jason Voorhees. In order to at least contain Jason, the plan is to freeze him in cryogenic suspension; but, as usual, things go horribly wrong and he breaks free to resume his murderous ways. The sole survivor of this latest rampage, Rowan, manages to lure Jason into the cryogenic chamber, but before she can complete the process and escape, she is mortally wounded and frozen in time along with Jason.

Two years later a somehow escaped Jason Vorhees is lored into the cryogenic chamber by a boy named Treston Sutton, but do to the chamber leak Treston is frozen in time along with Jason and Rowan.

The place is Old Earth, now a contaminated planet abandoned for centuries, a world of violent storms, toxic land masses and poisoned seas. Yet humans have returned to the deadly place they once fled; not to live, but to research the artifacts of the lost civilizations that caused this enormous environmental disaster. Little does the most recent landing party of interplanetary explorers realize the fate that awaits them when they stumble upon an unusual find from a primitive technological age.

The student explorers, led by Archaeology Professor Lowe and their tech-droid KAY-EM 14, enter the ancient underground remains of the Crystal Lake Research Facility. There, they make a major archaeological discovery: three frozen ancestors; a beautiful young woman, a large man wearing a strange mask, and a little boy. There's only one problem: the auto-regeneration procedure has somehow been triggered. The frozen cry-jell is melting like a block of ice and soon the three bodies will thaw and deteriorate! With time running out, the young explorers return to their starship and blast-off for Earth II, where they are surprisingly able to revive Rowan, the young woman and Treston, the little boy. But very soon, these students will come face-to-face with a shocking, totally new form of evil as Jason comes back to life as well and begins to silently stalk them through the corridors of the spacecraft.

Once they see Jason is alive and has killed someone aboard the ship, Sergeant Brodski leads an attack force against Jason, but all his troops are killed and he is injured. Afterwards, Jason kills the pilot of the ship causing it to crash into the space station, Solaris. The ship survives but Solaris is destroyed. Professor Lowe, who is trying to make money off Jason, is killed when Jason takes his old machete back, and goes after the students. One of them, Kinsa, tries to escape in a shuttle but crashes into the hull, damaging it. An android named Kay Em fights Jason and defeats him, destroying his right arm, left leg, and most of his head.

However, the hull begins to bleed out, which will result in core implosion. Help is sent for, and Sergeant Brodski is found and healed at a medical station. They decide to escape to the other side of the ship and wait there until the shuttle arrives, and plan to separate from the damaged side by destroying the bridges. However, a medical station turns Jason into a cyborg with a metal hockey mask. This time he gains the advantage over Kay Em and punches her head off. Everyone escapes to the other side of the bridge except Waylander, who detonates the explosives planted there, destroying the bridge.

Jason punches through the wall of the ship, causing Janessa to be sucked into space (through a grate). When the shuttle arrives, the door it is docked to won't open due to a power failure, so Brodski goes outside to fix it. Rowan, Treston, and Tsunaron distract Jason with a simulation of Camp Crystal Lake. Finally they enter the shuttle, but Brodski is not able to get in before the shuttle leaves. The ship explodes, sending Jason flying straight toward the shuttle. However, Brodski intercepts him and they both go flying toward Earth 2 and are burned up in its atmosphere.

Rowan,Treston, Tsunaron, and Kay Em head for Earth 2 inside the shuttle, and two campers see what's left of Jason and Brodski land in the lake. By the time they land in the lake, all that remains is Jason's mask.

With Freddy vs. Jason in development hell, Producer Sean S. Cunningham was so frustrated that he decided to make another Friday movie. Todd Farmer who was an aspiring writer in Hollywood met with Cunningham about writing a script for the proposed 10th film, which eventually became this project.

Filming began on March 6, 2000 and ended in April 30, 2000 in Toronto, Ontario. Filming took place in an abandoned military base in the outskirts of Toronto. The special effects were done by ToyBox Canada.

Todd Farmer mentioned the possibility of a sequel back in 2003. but the proposed sequel never happened. 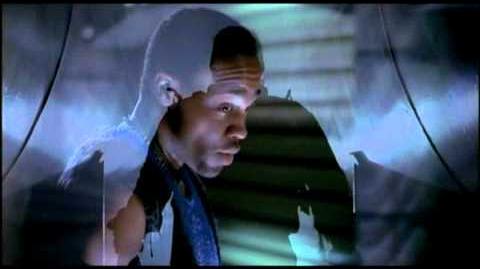 Retrieved from "https://horror.fandom.com/wiki/Jason_X?oldid=102866"
Community content is available under CC-BY-SA unless otherwise noted.