Jaws 3-D is a 1983 American horror film directed by Joe Alves and starring Dennis Quaid, Bess Armstrong, Lea Thompson and Louis Gossett, Jr. It is the second sequel to Jaws, which was based on the novel of Peter Benchley.

Chief Martin Brody's older son, Michael now works for SeaWorld in Florida, which is preparing for the launch of its new "Undersea Kingdom," a set of tunnels where people can "view the wonders of the deep without ever getting wet." The film opens with a great white shark following a team of water skiers, among them was Kelly. Their boat stalls, but then its driver gets it going again before anyone is attacked.

Michael Brody is the chief engineer, and lives with his girlfriend, Katherine Morgan, who is senior biologist at the park. Katherine and her assistants, Dan and Liz, wonder why the dolphins are afraid to leave their pen. As Sean, Michael's younger brother, arrives to visit, he reveals a deep fear of the water. Kelly, after meeting Michael, Sean, and Katherine in a bar, tries to dispel the phobia by playing in the water (mostly) naked at nighttime.

Meanwhile, Shelby Overman, one of the mechanics, dives into the water at dusk to repair the gates. He is attacked by a great white shark and killed, only leaving his severed arm. The next morning, Michael and Katherine are informed of his disappearance by Charlene, a woman with whom Overman is living. She is quite irate at his failure to return, and fears the worst.

Michael and Katherine go down in a submarine to check the tunnels and find Overman's severed arm. They decide to go into a piece of scenery, the Spanish galleon, although encouraged by Katherine's two dolphins to stay away. They continue the search, leaving the submarine, only to be assaulted by a great white. The dolphins, having sensed trouble from the start and visibly beseeching Katherine to stay in the sub, respond to Katherine's waving hands. They heroically rescue Mike and Katherine by allowing them to ride them back to the safety of their dolphin pen.

This information is at first disbelieved by park owner Calvin Bouchard, but is quite exciting to his friend, the hunter Phillip FitzRoyce. Katherine protests FitzRoyce's intent to kill the creature, so capturing it is the decided course. The baby great white is captured and nursed to partial health by Katherine and Liz. Before the shark can be put on display in the park, it must regain its strength -- Michael and Katherine keep it in a small holding pool. However, Calvin orders it exhibited as being the first Great White in captivity, but it dies.

Meanwhile, Kelly persuades Sean to join her on the bumper boats. While walking through of on the underwater tunnels, a girl is terrified when she sees a hideous corpse, revealed to be Overman, bob up to a window. Katherine reveals that the bites came from a shark with a mouth a yard across, which is initially ridiculed by FitzRoyce, saying "That would indicate a shark of some 35 ft. in length", which is too big for a normal great white. They surmise that the shark's mother has also breached the gates of the park, but she can't convince Calvin of this fact. The mother shark is actually trapped in the intake tube of the park's water pump but escapes when it forces the gate open. The mother shark shows up at the window of their underwater cafe. The shark exacts her revenge, first by causing a leak that nearly drowns everyone in the underwater tunnel, then turns her attention to everyone on the beach. She fails to capture the water skiers, but capsizes Sean and Kelly's bumper boat, and Kelly gets a laceration from the shark's coarse skin.

FitzRoyce leads the shark into the filtration pipes where the water from the ocean is brought into the lagoon, hoping to trap her inside. However, he drifts right into her mouth after his lifeline rope snaps. He prepares a grenade, but he is crushed to death before he can use it.

Unaware of FitzRoyce's death, Michael has gone down to repair the underwater tunnel so the technicians can restore air pressure and drain the water, with Katherine watching his back. He welds the repair piece, but, with no pressure in the pipe to restrain her, the shark breaks free of the filtration pipe and attacks Katherine again, but is protected by her dolphins. They return to the control room with Calvin and the technicians. The shark smashes through the acrylic glass, flooding the room. As everyone tries to escape, Mike notices FitzRoyce's body still inside the shark's mouth, clutching the grenade. Mike uses a pole to pull the grenade's pin, and it explodes, blowing the shark to pieces.

Katherine and Mike float up to the surface, explaining that Calvin managed to rescue the female technician, though the shark attacked the male technician and dropped him. Katherine is terrified for her dolphins, until they triumphantly show up in a splash, performing the tricks they refused to do. 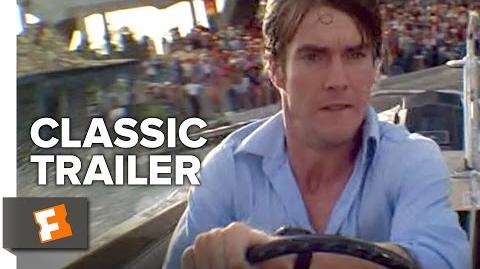 Retrieved from "https://horror.fandom.com/wiki/Jaws_3-D?oldid=141762"
Community content is available under CC-BY-SA unless otherwise noted.