Knifed in back and stomach

Jennifer Jolie is a character in the third installment of the Scream series, Scream 3. Her character is reason for some comedic scenes and lines. In the end of the film she is killed by Ghostface and is his last victim before revealing his identity.

She was portrayed by Parker Posey.

Jennifer is first introduced in a scene in which Gale Weathers and detective Kincaid meet the actors of the newest Stab film, Stab 3, Jennifer is portraying Gale in this film. Gale discusses with Jennifer, Roman Bridger (the director) and Dewey Riley the recent murders of Cotton Weary and his girlfriend. Since Cotton was an actor in the film as well, Jennifer is worried about the consequences of his murder and hires professionel protection. Both Steven Stone, her bodyguard, and Dewey become her guards.

After more killings the remaining Stab actors are together one evening in Jennifer's house. It's shown both Jennifer and Dewey are getting closer, much to the dismay of Gale. When the power goes out, it turns out the killer is toying with them. He kills Jennifer's bodyguard Steven Stone and sends them several pages of the Stab 3 script through fax in which he reveals who is going to be killed next. The group is afraid and goes outside, however they don't have the last page of the script yet and don't know whom will be killed. Jennifer panics and in the end Tom goes inside to find out the truth. It turns out the last page tells them the one who will be killed is the one "who smells the gas". Tom, who is holding a lighter, gets blown up, and Jennifers house blows up with him. The remaining people get thrown off the hill in the blast and for a moment it's unsure who survived. Gale and Dewey find each other fast and when Jennifer arrives she's angry at Dewey because he was hired to protect her, not Gale. Jennifer slaps Dewey after this and in return Gale slaps Jennifer. Jennifer claims that her lawyer will like that.

After the blowing Jennifer starts to be around Gale more. She tells Gale this is for her own protection, because she has no house and no bodyguard, and if the killer gets to them he'll kill Gale and not her. According to Jennifer, this theory makes a lot of sense however Gale strongly disagrees. Jennifer and Gale investigate the murder of Maureen Prescott, the mother of Sidney, since the killer is leaving pictures of her at the crime scenes. They find out that Maureen was living in Hollywood for a while as well and starred in several films of horror producer John Milton. Gale, Dewey and Jennifer confront John Milton about this.

Even though everyone is anxious and not in the mood for celebration, they meet together in the house of John Milton to celebrate the birthday of Roman. The celebration does not last, because soon they are chased again by the masked killer. At first it seems like Jennifer escapes the killings because she's staying with Dewey and Gale, but soon she gets seperated from them after rolling into a secret room. In here Jennifer is chased by the killer and at first she outplays him. However, when she gets in a hall with one-way looking glass the killer finds her again. Jennifer screams at him that he can't kill her because in the Stab 3 film she turns out to be the killer. the killer doesn't listen to her pleas and starts knifing her in the back and stomach. Gale and Dewey notice something is wrong and start shooting the glass but it's too late, Jennifer has been killed by Ghostface. 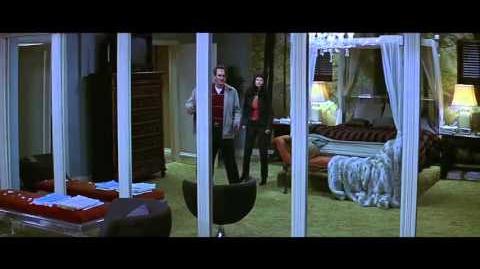 Retrieved from "https://horror.fandom.com/wiki/Jennifer_Jolie?oldid=124690"
Community content is available under CC-BY-SA unless otherwise noted.