He is a Native American working as an agent/assassin for The Shop and he is also a badly scarred Vietnam veteran with only one eye.

John Rainbird was played by George C. Scott in Firestarter. He is a white old man working as an agent/assassin for The Shop and he is a badly scarred Vietnam veteran with only one eye.

He kills Joseph Wanless, because he obstructed and threatened The Shop´s plans and he receives the job of kidnapping Andy and Charlie McGee to test their abilities for warlike purposes. He agreed only, if he, in return, can kill Charlie once the tests are over. His intention is to kill her and look into her eyes while he does that so that he can see her die and so that her so called power can be transferred to him and he later take it to the other world, when he dies (He is a psychopath). His plans, however, are thwarted by Andy, who fooled The shop into believeing he no longer had his powers and then used them to manipulate Captain Hollister, who later tells him about Rainbird. He manages to meet with Charlie through the Captain and foils Rainbird´s plans.

He still managed to kill Andy McGee after he killed the Captain  and then he tried to kill Charlie McGee, which he intended to do from the beginning once The Shop had finished with the experiments on her, but she melted the bullet intended for her and burnt him. She leaves him for dead.

John Rainbird was played by Malcolm McDowell in Firestarter 2.

He survives the burning and returns for his quest. The burning has left marks in his face. This quest will lead him to create similar children and to a final confrontation with Charlie. 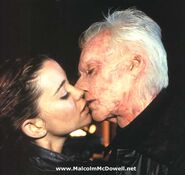 Add a photo to this gallery
Retrieved from "https://horror.fandom.com/wiki/John_Rainbird?oldid=124252"
Community content is available under CC-BY-SA unless otherwise noted.