Jonathan Harker was born in the early 18 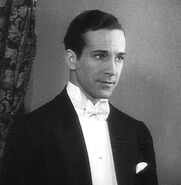 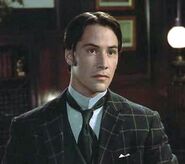 When eating dinner Count Dracula mentions his long dead wife. Harker makes a comment that offends Count Dracula and The Count gets angry with him. Jonathan then apologizes to Count Dracula. After dinner, harker is in his room shaving, when he see's Dracula in the mirror he jumps because he was startled, which causes Jonathan to cut himself accidentally with his razor blade. Dracula starts telling him about the history of the castle. When Jonathan looks away to grab a towel to wipe the blood of his face, Dracula licks the razor because of the blood, when Jonathan looks up Dracula wipes his face only for the blood, which causes Jonathan to not just be creeped out but to also get and uneasy feeling.

That night Jonathan hears a noise and follows it. He is then met with the zombies of all of Dracula's past victims. Harker runs away and goes into a room. But he then finds himself in Dracula's chambers. Dracula is asleep in a coffen which causes Harker to finally realize what is going on. Jonathan runs out of the room and takes a different hallway which leads him to a main hallway. Dracula catches up with Harker and tells him that he needs to write MIna a letter telling her how he's going to stay in Romania for a little while longer. When Harker finishes writing the letter Dracula sends it and then Locks Harker in a dungeon, where Harker is fed on by Dracula's brides.

Later Haker is taken to a more comfortable living space. He is taken to a room. But he is then met again by Dracula's brides. Dracula's brides then make the already sick Jonathan Harker think that everything is okay. The Brides then start to feed off of Harker. They get on top of him and start biting him, Harker doesn't even flinch until one them decides to go to a lower spot, in which he then sits up and gasps at. The brides continue to bite him until Dracula comes into the room and scares them. Dracula then holds up a baby that belongs to one of the brides and all of the brides including Dracula feed on the baby causing Harker to jump up and scream no.

Retrieved from "https://horror.fandom.com/wiki/Jonathan_Harker_(disambiguation)?oldid=134342"
Community content is available under CC-BY-SA unless otherwise noted.