Jennifer Love Hewitt, Zendaya (What did you do last summer?)

I Know What You Did Last SummerEdit

Julie James and her friends Ray Bronson, Helen Shivers and Barry William Cox are celebrating their graduation on the 4th of July, when they get into Barry's new car and speed along a seemingly deserted seaside road after drinking on the beach. They accidentally hit a pedestrian, and believe the man to be dead. The only other person they saw on the road that night was their former classmate Max Neurick, who they smoothly talked over to avoid suspicion.

Rather than risk being arrested, all four friends decided to dump the body in the ocean and vow never to tell a soul about what they did. Just as Barry does so however, the man tries to pull Barry under the water too, but Barry struggles free.

One year later, the friends have gone their separate ways. A series of cryptic events lead the friends to get back together. Julie is the first recipient of a spooky note, which suggests that somebody saw what they did the previous year. Soon, Max is killed by a hooded individual, dressed as a fisherman and wielding a sharp hook.

As the mind games continue, Julie decides to research possible suspects, which brings her to David Egan, whom they believe they killed on the road that eventful summer night. It is revealed that two summers ago David Egan accidentally killed his girlfriend Susie Willis in the same location that the group supportingly ran over. They later meet his sister Melissa 'Missy' Egan and ask for advice.

As Helen attends the Croaker Queen Pageant, Barry, a lone police officer and Helen's sister Elsa are the next to die, before the fisherman finally corners Helen in an alley and kills her too.

Meanwhile, Julie at last figures out David Egan's true identity. After meeting with Ray, she solves the mystery. They didn't run over David Egan one year ago, but someone else. Because the face was disfigured and bloody, they were unable to truly identify who the person was; Julie believes that Ben Willis, Susie's father, tried to avenge his daughter's death by killing her boyfriend/murderer, David Egan. Missy, however, believed that David committed suicide due to guilt and depression. David was actually murdered by Ben Willis and was set up to look like a suicide. His body was the one found by the police in the docks. Ben Willis was the man that Julie and her friends ran over; however, he lived and returned to kill them. The fisherman is Ben Willis; this is revealed to Julie when he pulls out the large fishing-hook from his jacket. The older man is also wearing dirty Wellington boots, the same boots Julie found at the incident a year ago. She finds the corpses of Barry and Helen in the ice meant for freezing fish. The chase ends with Ben getting his hand chopped off, and then thrown overboard. Although later, nobody can find his body, only his hand and the fish hook. The sheriff says not to worry and that they “usually” do find the body.

A year later, Julie is back at college. (Ben Willis’s body remains missing.) She prepares to take a shower after finishing a telephone conversation with Ray. A dorm-mate passes by and tells Julie that she has mail: a letter which looks exactly like the one Julie received last year, the letter which started her entire nightmarish ordeal. To Julie's relief, it is only an invitation to a pool party. Returning to her shower room, however, she finds it completely filled with steam. She also finds the words "I STILL KNOW" written on the glass shower-door. Julie is shocked. Then Ben Willis, still wearing his slicker (waterproof coat), crashes through the mirror.

I Still Know What You Did Last SummerEdit

Julie (now in college) is still haunted by visions of Ben, the murderous fisherman who killed her friends the previous year. Julie and her friend Karla Wilson win a holiday to go to the Bahamas. Accompanying them is Tyrell, Karla's boyfriend and Will Benson, Julie's new boyfriend.

On the island they dock on, there is a massive storm and people start disappearing upon being brutally slain by an unseen assassin. To complicate matters, no-one can call for help because the power is down. It turns out the holiday competition was a set up, and Ben Willis was behind it. He later kills Tyrell, and tries to kill Karla, but only succeeds in injuring her leg.

It is eventually discovered that Will is Ben's son, and was a key part of Ben's revenge plan. Ray by this point knows Ben is back, having witnessed his friend David be killed by Ben Willis. Ray was hurt and had to be taken to the hospital. He escapes however and takes a boat to the Bahamas during the stormy weather, and he is able to save Julie and Karla from Ben by causing Ben to inadvertently stab Will with his hook. Julie then repeatedly shoots Ben into a prepared grave, before they are rescued by the police.

A year later, Ben returns to extract his bloody revenge by seemingly killing Julie by slashing her legs and dragging her body under the bed while Ray is locked in the bathroom. Their fates are ultimately unknown however, as the third film of the series is a new story. Although the film ends with Ben returning and attacking Julie in her bedroom, it's unclear, if this is real and he does kill her and Ray or, like the shock at the end of the first film, is simply a dream of Julie's.

I'll Always Know What You Did Last Summer Edit

In I'll Always Know What You Did Last Summer it is revealed that their deaths were real. 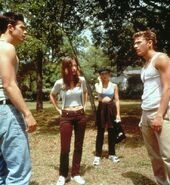 Add a photo to this gallery
Retrieved from "https://horror.fandom.com/wiki/Julie_James?oldid=136755"
Community content is available under CC-BY-SA unless otherwise noted.