On December 22, a suburban family gets together to celebrate Christmas —Tom (Adam Scott) and Sarah (Toni Collette), their children Beth (Stefania LaVie Owen) and Max (Emjay Anthony); Sarah's sister Linda (Allison Tolman), Linda's husband Howard (David Koechner), their children Stevie (Lolo Owen), Jordan (Queenie Samuel), Howie Jr. (Maverick Flack), and their baby daughter; Sarah and Linda's aunt Dorothy (Conchata Ferrell); and Tom's Austrian mother, who is affectionately referred to as "Omi" (Krista Stadler). Max wants to continue the family's Christmas traditions, but tensions between various members of the family keep everyone from having a good time and the family lose their Christmas Spirit. Provoked by Stevie mockingly reading his Christmas letter, Max loses his temper and fights Stevie over the dinner table until his parents break him up. Upset , Max yells that he hates Christmas and his dysfunctional family before running upstairs. Tom comes to Max's room attempting to comfort him over the fight and reminding him that it's the time of year to be with one's family, even if they're not the best of people. After Tom leaves, Max tries to put his Santa letter into an envelope, but in a furious rage he starts to rip up the letter. He then opens his bedroom window and casts the shredded letter into the wind and is blown into the night sky just as a sudden and ominous storm cloud forms over the neighborhood, cutting off the electricity to the town.

On the morning of December 23, a DHL delivery man has Linda sign for a package. She sees a bag of presents on the porch and brings those in also. After not hearing from her boyfriend that morning, Beth travels to his house in the blizzard on foot, being a few blocks away. However, on the way she is frightened by the sight of a massive hooded figure with horns. She yells for help as the horned creature purses Beth, pouncing across rooftops until she finds a van, but encounters the delivery man frozen in the seat. Beth hides under the van, seeing the creature has cloven hooves for feet, and is seemingly spared by the creature after it paces around and vanishes. However, a jack-in-the-box is left, and she is taken by it.

Evening comes and since Beth has not yet returned, Tom and Howard head out to travel to Beth's boyfriend Derek's house. They retrieve two guns from Howard's Hummer. They arrive at Derek's house to find it in devastation, with the chimney split open as well as large, goat-like hoof prints on the floor. Hearing Beth screaming, they run outside to find her. Shortly after Howard is attacked and bitten by a creature in the snow, with Tom barely saving him. The two men retreat back to the house, and after fearing what just happened, the family board up the doors and windows, with Tom promising Sarah they will look for the missing Beth when morning comes. When the family falls asleep Howie Jr. is woken up by the sounds of a chain coming down the chimney, and finds a gingerbread cookie on it. He walks to the chimney and picks up the cookie, but after biting into it, it comes to life and wraps the chain around him. As he screams the family tries to pull him back but they lose grip and he is taken up the chimney.

Omi reveals to the family what is happening—they are being tormented by Krampus, an ancient demonic spirit that punishes those who are bad at Christmas, referring to him as the "shadow of Saint Nicholas". Omi admits that when she was young, the selfish nature of her village residents and her family's poverty and their own unruly behaviour in the aftermath of World War II caused her to lose her love of the holidays as she, like Max, wished her parents to disappear, which summoned Krampus and resulted in her parents, and town being dragged into hell. She alone was spared by the demon, who left behind a bauble with his name inscribed and her life as a reminder of what happens when one loses their Christmas spirit ("Like he had for thousands of years, Krampus came not to reward, but to punish. Not to give, but to take.") Howard, however, dismisses Omi's tale and attempts to go after Howie Jr. but he encounters several demonic creatures lurking around the yard and Howie seemingly encased into a snowman.

In the attic, the bag of presents suddenly begins shaking. The family runs to the attic and witness a large, snake-like jack-in-the-box monster eating Jordan and are attacked by a group of monstrous toys, but manage to escape and save Stevie. When the family dog runs into the air vents to attack the snake-like jack-in-the-box it falls through the ceiling and the monstrous toys attack again. Just as Dorothy is about to kill the jack-in-the-box with the gun, monstrous looking elves break in and take Dorothy, the baby, and Howard. Krampus is heard landing on their roof, and the rest of the family members quickly decide to make a run for the snowplow but Omi decides to stay behind to face Krampus. Krampus comes out of the chimney and opens the sack in front of Omi, who is then attacked by the toys in the sack off screen.

As the family almost makes it to the snowplow, Tom stays behind to fight off the creature under the snow but is then taken. Linda and Sarah are both then taken too after getting Max and Stevie in the snowplow. The kids discover the snow plow won't start and are attacked by the elves, taking Stevie. Krampus appears in front of Max and gives him a bauble with his name on it, wrapped in a piece of his shredded Santa letter, before vanishing. Max realizes that he is the reason why Krampus came. Max confronts and pleads with Krampus who opens a pit to hell to give his family back and take him instead. Krampus however makes the elves throw Stevie into the pit then picks Max up and holds him over the pit. Max apologizes to the demon for losing his Christmas spirit and just wanted to have the Christmas they used to have but Krampus drops the screaming Max into the pit.

Max suddenly awakens in his bed on Christmas morning. He looks out his window and sees that the neighborhood has returned to normal, and finds his family downstairs opening presents. Believing that the entire experience had been a dream, he opens a present and discovers the Krampus bauble and the family falls silent and remembers what happened as the scene pans out to reveal them being seen through a snow globe in Krampus' workshop along with many others.

Directed by Michael Dougherty, who also directed the 2007 movie Trick 'r Treat, Krampus is co-written by Dougherty, Todd Casey and Zach Shields. Dougherty, Thomas Tull, Jon Jashni, and Alex Garcia of Legendary Pictures produced the film. The film originally was scheduled to be released on November 25, 2015, the release was later pushed back to December 4, 2015. DreadCentral.com reported that Krampus will have similar directorial style as Trick 'r Treat, but this film will have a Christmas theme. On November 21, 2014, Allison Tolman and Emjay Anthony joined the cast. On March 3, 2015, Adam Scott, David Koechner and Toni Collette joined the cast.

Principal photography on the film began on March 12, 2015, as announced by Legendary Pictures. 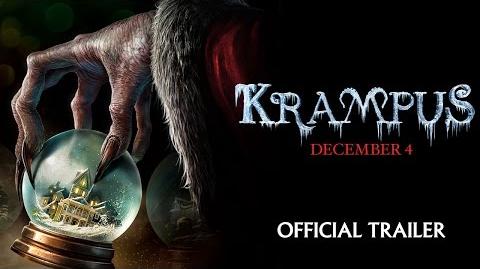 Retrieved from "https://horror.fandom.com/wiki/Krampus?oldid=140980"
Community content is available under CC-BY-SA unless otherwise noted.