Land of the Dead

Day of the Dead

Diary of the Dead

Land of the Dead is a 2005 post-apocalyptic horror film directed by George A. Romero. It is the fourth film in Romero's Dead series. It is currently the highest grossing film in the series, having made over $40 million in the box office.

Years after a zombie apocalypse, survivors have set up outposts across the United States, one of which, in the city of Pittsburgh, Pennsylvania, contains a feudal-like government. Bordered on two sides by rivers and on the third by an electric fence, the city has become a sanctuary, with the rich and powerful living in a luxury high-rise called Fiddler's Green while the rest of the population subsists in squalor. The city's ruler Paul Kaufman has sponsored Dead Reckoning, a heavily armored vehicle that can travel through the zombie-infested areas with ease. Armed with remote-controlled heavy machine guns and video cameras, Dead Reckoning functions as a moving fireworks launch base, on the premise that zombies are fascinated by fireworks and will stare at them, ignoring their environment. Riley Denbo, designer and commander of Dead Reckoning, has recently retired. Unlike Kaufman, Riley is respected for his work in protecting the city from danger, as well as for bringing critical food and medical supplies which the citizens can no longer acquire safely themselves.

Using the moving anti-dead tank, Dead Reckoning, Riley and crew ventured into the neighboring cities that are overrun with zombies in order to procure supplies from abandoned stores and warehouses. One of the interesting things they noticed on these missions is that many of the zombies appear to exhibit some kind of thought process or planning. One such zombie, "Big Daddy," who was a gas station owner in life, is shown to be especially capable of comprehending and learning. Back in the protected city, Riley discovers the man who he bought a car from, Chihuahua, entertaining his bar's patrons by bear-baiting a hooker named Slack, to some zombies. Riley and Charlie save Slack but kill Chihuahua and all three are shortly arrested. Slack reveals she was being executed on Kaufman's orders, because she works for Mulligan, a former co-worker of Riley's trying to instigate rebellion among the poor.

Meanwhile, the assassin Cholo DeMora, second in command of Dead Reckoning, is denied an apartment in Fiddler's Green despite his longtime, devoted service to Kaufman. Upon being rebuffed, Cholo threatens to destroy Fiddler's Green with the Dead Reckoning, seized by himself and his assistants Pretty Boy, Mouse, Anchor, and Foxy. Zombies attack as they are leaving, but Cholo orders his crew not to intervene. Kaufman sends Riley to stop Cholo, alongside Manolete, Motown, and Pillsbury. Manolete is bitten and subsequently executed by Slack. Once they come across Dead Reckoning, Riley devises a plan to approach the vehicle alone. Against Riley's orders, Charlie, Slack, and Pillsbury follow him, but they disable Motown and leave her behind on the grounds of her loyalty to Kaufman. Cholo realises that Riley is working for Kaufman and holds both Riley and Charlie at gunpoint. Before Slack and Pillsbury can react, Motown, who has come round, opens fire and nearly kills both Riley and Cholo, before being bitten by a zombie and executed by Slack. With this distraction, Riley de-activates Dead Reckoning's weapons systems and convinces Cholo to allow him escape Northward, while Cholo goes west. Cholo is later bitten by a zombie and returns to kill Kaufman.

Zombie leader Big Daddy perceives that the river is no obstacle to invasion, so he leads the zombies against the human city, and then himself follows Kaufman to an underground garage. When Big Daddy leaves the garage, the now dead-and-reanimated Cholo attacks Kaufman; but both are killed by Big Daddy when the latter causes an explosion. Riley and his crew discover that although most inhabitants have become zombies themselves, some had followed Mulligan to escape. Pretty Boy has the opportunity to kill Big Daddy and the zombies; but Riley orders her against it. Riley and his friends then use Dead Reckoning to leave the city and head toward Canada, firing the rest of their fireworks because they no longer work on the zombies.

Early titles considered for the film included Twilight of the Dead, Dead City, and Dead Reckoning. 20th Century Fox Studios wanted to title the film Night of the Living Dead, like the original film. Romero quickly refused after learning that Fox did this because they wanted to own the rights to the title Night of the Living Dead, which would subsequently give them ownership over the original film and any remakes made afterwards.

This film drew on elements that were present in the original script for Day of the Dead.

The majority of the filming took place in Canada, mainly Ontario and Hamilton.

Actor Simon Pegg and director Edgar Wright were both offered minor roles in the film after the success of their film Shaun of the Dead. Romero loved the black comedy zombie film and was very impressed by the amount of work done by the two. However, they both insisted on playing zombies in the film instead of the minor characters that they were offered.

Land of the Dead was Romero's first Dead film to recieve an MPAA rating for its theatrical release. Due to violence that was scripted, Romero edited the final cut of the film extensively in order to ensure an R rating. He later released the unedited cut as an Unrated Director's Cut on Blu-Ray in 2008. This version showed all of the blood and gore in its original state.

The film recieved positive reviews, having been released one year after Dawn of the Dead's international release. The film opened MTV's Saturday Horror Block in February of 2010.

Land of the dead was released on DVD on October 5, 2005 in an unrated format. On September 8, 2008 the film recieved an unrated directors cut release on Blu-Ray.

The Road to Fiddler's Green is a first-person shooter based on the film Land of the Dead. It was released in 2005 for Xbox and PC.

Roger Ebert gave the film three stars out of four for what he considered its skillful and creative allusions, something that he argued was pervasive among Romero's previous three installments that contained numerous satirical metaphors to the reality of American life. In this installment, Ebert noted the similarities between the fireworks mesmerizing the zombies and the shock and awe tactics applied during the 2003 Invasion of Iraq and the film's distinction between the rich and poor, those that live in Fiddler's Green and those that live in the slums, something he considered to be Romero's take on the rising gap between rich and poor in the United States. 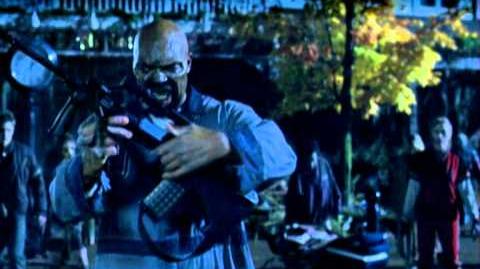 "Land of the Dead" Official Trailer

Retrieved from "https://horror.fandom.com/wiki/Land_of_the_Dead?oldid=127409"
Community content is available under CC-BY-SA unless otherwise noted.