Leatherface is a 2017 American horror film directed by Alexandre Bustillo and Julien Maury and written by Seth M. Sherwood. The film is a prequel of the Texas Chainsaw Massacre and Texas Chainsaw 3D. The film was released on October 20th, 2017.

Warning: this text contains details about the plot/ending of the film.
At the Sawyer homestead, a birthday party is being held by the family matriarch Verna Sawyer for the youngest member of the Sawyer family, Jedidiah. As his birthday present and to induct him into the murderous family rituals, he is presented with a chainsaw and is urged to slaughter a man they have accused of attempting to steal from them. Jed refuses, visibly disturbed, and the victim is instead killed by Grandpa Sawyer.

In 1955, couple Betty Hartman and Ted Hardesty come across the seemingly wounded Jedidiah Sawyer. Betty is promptly killed by the Sawyer family. Her father, Sheriff Hartman, is shocked to find his daughter deceased. He takes Jedidiah into custody as revenge, sending him to a mental institution known as the Gorman House Youth Reformery.

Ten years later, recently-hired nurse Elizabeth White forms a bond with patients Bud and Jackson at the Gorman House. Verna arrives with an injunction to allow family visitation for a now-teenage Jedidiah, only to be rejected by Doctor Lang. On the way out, she violates security, causing a riot during which many of the nurses and patients are killed. Elizabeth is saved by Jackson but the two are taken hostage by crazed escapees Ike and Clarice. They come across a bloodied Bud, having just killed Director Lang in a fit of rage, and decide to take him with them.

The group arrives at a rest stop diner. Ike and Clarice begin a murder spree within the diner in which Bud is injured and the group is forced to flee. Hartman arrives on the scene with Deputy Sorells and discovers that one of the escaped inmates is in fact Jedidiah. That night, the escapees take refuge in an abandoned mobile home where Clarice and Ike engage in sexual intercourse, revealing her scarred body and involving the corpse of the former homeowner in the debauchery. Elizabeth tries to escape but is stopped by Ike. Ike continually insults Bud, provoking him when the others aren't around. The next morning, Clarice finds Ike missing and goes searching for him. Jackson and Elizabeth find Bud sleeping on Ike's corpse and quickly take him away.

Clarice wanders into the woods looking for Ike and is apprehended by Hartman. She is shot in the head as the others watch from a distance. Jackson and Bud continue on with Elizabeth. As a Deputy passes, Elizabeth screams out, leading to Bud getting shot. Bud's death sends Jackson into a rage. He kills the Deputy and has Elizabeth drive them in the deputy's vehicle. The two are pursued by the deranged Hartman, who opens fire on them. A bullet severs Jackson's face. Later that night, Elizabeth awakes handcuffed in Hartman's car and answers a dispatch call, alerting Sorells to her location. Sorells visits Verna and reveals to her that Hartman has Jedidiah. Verna feeds Sorells to her pigs and gathers the family. At the barn where his daughter was killed, Hartman takes Elizabeth and the injured Jackson hostage, revealing that Jackson is Jedidiah Sawyer. Verna arrives and Hartman is incapacitated by the other Sawyers.

Back at the Sawyer home, Verna stitches the remnants of the mentally-scarred Jedidiah's face and applies a muzzle to hold them together. She gifts Jedidiah with his original chainsaw and Elizabeth watches in horror as he bisects Hartman to death. As the family celebrates, Elizabeth flees. She nearly escapes, only to be caught in a bear trap. She attempts to appeal to Jedidiah's sympathy, while Verna encourages him to kill her to protect their family. Jedidiah begins to listen to Elizabeth's pleas that he is not a killer until she insults Verna. This causes him to decapitate her in retaliation.

The next morning, Verna burns the evidence of the prior night's events and the Sawyers feed the remains of their victims to the pigs. In the basement, Jedidiah crafts Hartman's and Elizabeth's flesh into a mask and applies lipstick. The film ends with him smashing the mirror at the sight of his reflection. 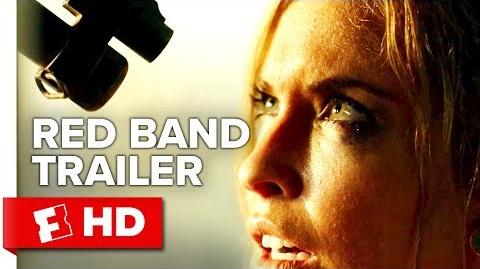 Retrieved from "https://horror.fandom.com/wiki/Leatherface_(film)?oldid=132706"
Community content is available under CC-BY-SA unless otherwise noted.