This page needs improvement. It can be improved by: pictures, quote, trivia

Paranormal Activity: The Marked Ones

Paranormal Activity: The Marked Ones is a latino spin-off of the film series Paranormal Activity. The film is directed by Christopher Landon and stars Molly Ephraim, Richard Cabral and Carlos Pratts. It was released on January 3, 2014 in the United States.

The story begins in June 2012 in Oxnard, California. Recent high school graduate Jesse has a party which includes his family and friends to celebrate his graduation. After days of humorous stunts, Jesse finds a bite on his arm. Days later, he and his friend Hector are confronted by two thugs who attack them, but the thugs are somehow knocked out. When they show the incident to their other friend Marisol, Jesse cannot remember how it happened. After a few days of strange activity, he finds that he has superhuman abilities before he tests and plays with them.

Anna, the strange old witch-like neighbor of Jesse, is killed, and the police suspect that Oscar, a former classmate of Jesse, is the prime suspect. Jesse and his friend decide to find out what Anna's apartment looks like. They find black magic rituals, missing tapes of the third film, and a picture of Jesse. They are confronted by Oscar's brother, Arturo, who claims that Oscar did not kill her. The next day, Jesse and Hector meet Penelope, whom Jesse takes to Anna's apartment to have sex. Penelope finds a trap door in her apartment leading to the basement and is grabbed by an unseen entity before she breaks free and runs away, while Oscar emerges from it and goes to the bedroom. Jesse arrives back and chases Oscar upon seeing him, revealing that arm has been bitten by Anna and he had killed her. Oscar then commits suicide by jumping from a building onto the top of a car.

The friends check the basement and find photos of Oscar, Jesse, and his family. One of which suggests that his mother was once friends with Anna. Over a few days of strange activity, Jesse begins acting more strangely - sullen, moody, and dark. He goes to Anna's basement to find the cause of a dog's barking noise, only to find ghostly figures, including those of young Katie and Kristi. He ends up back in his own room - now even more sullen and dark.

Jesse is getting even more dark and his homicidal actions are uncontrollable. Hector and Marisol seek help from Ali Rey, who had researched about demons after the events of the second film and tells them about a coven who possesses others to create an army with the help of demons. Ali gives them an address to where a final ritual takes place, which they go to. They are attacked by a now possessed Jesse, who is knocked out and is taken to hospital. Hector and Marisol are knocked out by a mysterious figure, who takes Jesse away. After regaining consciousness, Hector and Marisol seek help from Arturo and his friend, Santo, to head to the place of the ritual. There, they find a gateway takes them to an "unholy place", in this case, Grandma Lois' house at the time the third film ended. The old coven women and the possessed Jesse attack the four and engage in fight, in which Marisol and Santo are killed.

Hector flees, leaving a seemingly dead Arturo behind, and goes through another gateway. He finds himself in the household of Katie and Micah (Katie Featherston and Micah Sloat), at the time the first film ended. Hector sees Katie walking from upstairs to get a knife. Upon seeing Hector, she screams for Micah, who arrives to attack Hector. But Micah is stabbed to death by Katie, as Hector flees. Hector is attacked by who appears to be a possessed Jesse, and drops the camera. Without Hector in sight and the camera still recording, a random witch appears, picks up and turns off the camera.

Despite predictions suggesting that The Marked Ones would open at #1 in its debut weekend, the film took a close second to Frozen (in its seventh week) with $18,343,611 at the North American box office.

By the end of its theatrical run, The Marked Ones grossed $32.5 million in North America and $58.4 million in other territories for a worldwide total of $90.9 million. 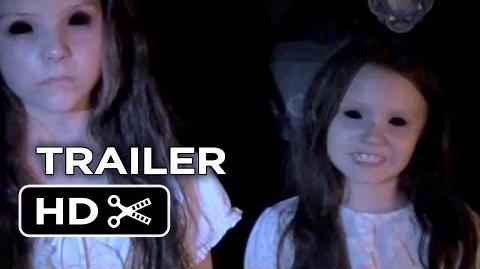 Retrieved from "https://horror.fandom.com/wiki/Paranormal_Activity:_The_Marked_Ones_(2014)?oldid=124344"
Community content is available under CC-BY-SA unless otherwise noted.