Piranha 3D is a horror comedy film directed by Alexandre Aja about killer/murderous prehistoric mutated piranhas and the second remake of the 1978 film by the same name. The film was released on August 20, 2010 and received positive reviews from critics.

Fisherman Matt Boyd is fishing in Lake Victoria when a small earthquake hits, splitting the lake floor and causing a whirlpool. Boyd falls in and is ripped apart by a school of piranhas that emerge from the chasm.

Jake Forester is admiring attractive tourists as spring break begins. He reunites with his old crush, Kelly Driscoll and meets Derrick Jones, a sleazy pornographer, as well as Danni Arslow, one of his actresses. Derrick convinces Jake to show him good spots on the lake for filming a pornographic movie. That night, Jake's mother, Sheriff Julie Forester, searches for the missing Matt Boyd with Deputy Fallon. They find his mutilated body and contemplate closing the lake. However, this decision is made difficult by the two thousand partying college students on spring break, who are important for bringing revenue to the small town. The next morning, a lone cliff diver is attacked and consumed by the marauding fish.

Jake bribes his two younger siblings, Laura and Zane, to stay home alone so that he can show Derrick around the lake. After Jake leaves, Zane convinces Laura to go fishing on a small sandbar island. They forget to tie the boat down and are stranded in the middle of the lake. Meanwhile, Jake goes to meet with Derrick and runs into Kelly, who invites herself onto Derrick's boat, The Barracuda. Jake meets Crystal Shepard, another one of Derrick's actresses, and cameraman Andrew Cunningham.

Julie takes a team of seismologist divers—Novak Radzinsky, Sam Montez, and Paula Montellano—to the fissure. Novak speculates that the rift leads to a buried prehistoric lake. Paula and Sam scuba dive to the bottom and discover a large cavern filled with large piranha egg stocks. Both are killed by the piranhas before they can alert the others to the discovery. Novak and Julie find Paula's corpse and pull it onto the boat, capturing a lone piranha, which they take to Carl Goodman, a marine biologist who works as a pet store owner. He explains that it is a super aggressive prehistoric species, long believed to be extinct, and that the piranhas have survived through cannibalism.

Julie, Novak, Fallon, and Deputy Taylor Roberts try to evacuate the lake, but their warnings are ignored until the piranhas begin to attack the tourists. Novak boards a jet-ski with a shotgun to help while Fallon drags people to shore and Julie and Taylor try to get swimmers into the police boat. Almost everyone in the lake is either wounded or killed by the piranhas or panicking guests attempting to escape.

Meanwhile, Jake spots Laura and Zane on the island, and forces Derrick to rescue them. Derrick crashes the boat into some rocks, flooding the boat's lower deck, and causing the boat to start sinking. Kelly is trapped in the kitchen while Derrick, Crystal and Andrew fall overboard from the impact of the collision. Crystal is devoured and Andrew escapes to shore unharmed. Meanwhile, Danni manages to get a partially eaten Derrick back on board.

Deputy Fallon makes a last stand, taking a boat motor and using its propeller to shred many piranhas, though he is presumably killed. After the chaos settles, Julie receives a call from Jake pleading for help. Julie and Novak steal a speed boat and head off towards the kids. They reach Jake and attach a rope to his boat. Julie, Danni, Laura, and Zane start crossing the rope, but the piranhas begin to bite and pull at Danni's hair, causing her to lose her grip on the rope and fall screaming into the water, where she is eaten alive. The others make it across safely, but the rope comes loose. Using Derrick's corpse as a distraction, Jake ties the line to himself and goes to save Kelly. He ties Kelly to him and lights a flare after releasing the gas from a pair of stored propane tanks. Novak starts the boat and speeds away just as the piranhas surround Kelly and Jake. They are dragged to safety as the propane tanks explode, destroying the boat and killing most of the piranhas.

Mr. Goodman calls Julie on the radio, and Julie tells him that they seem to have killed the majority of the piranhas. The horrified Goodman tells her that the reproductive glands on the piranha they obtained were not mature, which means that the fish they have killed were only the babies. As Novak wonders aloud where the parents are, a human sized piranha leaps out of the water and eats him.

Chuck Russell was originally scheduled to direct the film, and made uncredited rewrites to the script by Josh Stolberg and Peter Goldfinger, as well as incorporating the original John Sayles script that Joe Dante directed the first time around. Alexandre Aja was selected to direct the film instead. Production on the film was scheduled to begin late 2008, but was delayed until March 2009. In October 2008, Aja stated filming would begin in the spring. He further stated "It's such a difficult movie, not only because of the technicality of it and the CGI fish, but also because it all happens in a lake. We were supposed to start shooting now, but the longer to leave it the colder the water gets. The movie takes place during Spring Break and, of course, the studio wanted it ready for the summer, but if you've got 1,000 people who need to get murdered in the water, you have to wait for the right temperature for the water, for the weather, for everything."

Shooting took place in June 2009 at Bridgewater Channel in Lake Havasu, located in Lake Havasu City, Arizona. The water was also dyed red for the shooting. Citing constraints with 3D camera rigs, Aja shot Piranha in 2D and converted to 3D in post production using a 3D conversion process developed by Michael Roderick and used by the company, Inner-D. Unlike some other 3D converted films released in 2010, Piranha 's conversion was not done as an afterthought, and it was one of the first post-conversion processes to be well received by critics.

Piranha 3D received generally positive reviews. It is certified "fresh" on the review aggregator Rotten Tomatoes with an approval rating of 73% and an average score of 6.2 out of 10, based on 120 reviews. The consensus reads, "Playing exactly to expectations for a movie about killer/murderous fish run amok, Piranha 3-D dishes out gore, guffaws and gratuitous nudity with equal glee." On Metacritic, which assigns a normalized rating out of 100 to reviews from mainstream critics, the film has received a score of 53, based on 20 reviews, which indicates "mixed or average reviews".

A tongue-in-cheek scholarly review of the movie was written for the journal Copeia (Chakrabarty & Fink 2011), which reviewed the movie as if it were a documentary film.Empire gave the film three out of five stars, saying "Remember the film you hoped Snakes on a Plane would be – this is it! By any sane cinematic standards, meretricious trash ... but thrown at you with such good-humored glee that it's hard to resist. It's a bumper-sticker of a movie: honk if you love tits and gore! Honk honk honk."

Christy Lemire, film critic for the Associated Press, said "Run, don't walk: Piranha 3D is hilariously, cleverly gory. Mere words cannot describe how awesomely gnarly Piranha 3D is, how hugely entertaining, and how urgently you must get yourself to the theatre to see it. Like, now." HollywoodLife.com called the film "a campy masterpiece of a movie", adding "If you have an ounce of fun in your body, you will love this movie about killer/murderous piranhas that overtake a town of hotties – in 3D!"

Peter Hall of Cinematical.com said "The gore, the nudity, the language, the gags, the characters – it's all always on the rise. Just when you think things could not possibly get more ridiculous, that the film has peaked, Aja and screenwriters Pete Goldfinger and Josh Stolberg manage to ram another syringe of adrenaline into its heart."

The Hollywood Reporter referred to the film as "a pitch-perfect, guilty-pleasure serving of late-summer schlock that handily nails the tongue-in-cheek spirit of the Roger Corman original" while stating "Jaws it ain't – Aja exhibits little patience for such stuff as dramatic tension and tautly coiled suspense, and there are some undeniable choppy bits...but he never loses sight of the potential fun factor laid out in Pete Goldfinger and Josh Stolberg's script." The Orlando Sentinel gave the film one and a half stars out of four, stating that "Piranha 3D goes for the jugular. And generally misses, but generally in an amusing way." 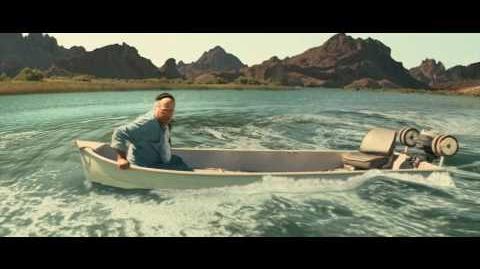 Retrieved from "https://horror.fandom.com/wiki/Piranha_3D?oldid=129387"
Community content is available under CC-BY-SA unless otherwise noted.