Prom Night is a 1980 Canadian slasher horror film directed by Paul Lynch, based on a story by Robert Guza, Jr., and starring Leslie Nielsen and Jamie Lee Curtis.

At a high school senior prom, a masked killer stalks four teenagers who were responsible for the accidental death of a classmate six years previously.

In 1974, four children – 11 year olds Wendy Richards, Jude Cunningham, Kelly Lynch and Nick McBride – are playing a game of hide and seek in an old, abandoned schoolhouse. The children begin to bully 10 year old Robin Hammond and she falls to her death from a window. Although it was an accident, the children make a pact not to tell anyone what happened, and a known rapist is blamed for her death. However, another person was watching and saw who really killed Robin.

Six years later, Robin's family deals with the anniversary of her death. Teenagers Kim and Alex Hammond, Robin's sister and brother, are preparing for the school prom, which is being held that night. During the day, Kelly, Jude and Wendy receive obscene phone calls. Kim and her boyfriend Nick decide to go to the prom together while Jude is asked by an easygoing marijuana smoker named Seymour "Slick" Crane. Kelly is going with boyfriend, Drew Shinnick, who seems to be more interested in having sex with her than anything. Wendy has no option but to go with the school rebel, Lou Farmer. While changing clothes after gym class, Kim and Kelly discover the locker room's mirror severely cracked.

Meanwhile, the sex offender who was blamed for Robin's death has escaped and Lt. McBride (Nick's father) investigates. During the senior prom, Kim and Nick perform a dance number together. Kelly and Drew prepare to have sex in the school changing room, but Kelly decides she is not ready. Drew leaves, angry and annoyed. As Kelly gets dressed, the masked killer slits her throat.

Jude and Slick have sex and smoke pot in a van outside of the school while being watched by Kelly's killer, who then kills Jude. Slick brawls with the killer while driving the van. The killer escapes from the van as it tumbles off a cliff and explodes, killing Slick. Lt. McBride is informed that the sex offender blamed for Robin's death has been caught, and he can now rest and enjoy the prom. Wendy is then attacked by the killer in the bathroom and is chased through the school. She is eventually murdered with an axe. Kim and Nick prepare to be crowned prom king and queen. Lou and his lackeys tie up Nick, and he plans to be king. Thinking he is Nick, the assailant sneaks up behind Lou and decapitates him.

Lou's head goes rolling onto the dance floor and the students witness this and flee. Kim finds Nick and frees him. As they prepare to escape, they are confronted by the killer and he attacks Nick. Kim eventually grabs the killer's axe and hits him on the head with it when Kim realizes who he really is. He runs outside where the police have arrived and as Lt. McBride tries to shoot, Kim stops him and the killer falls to the ground. Kim takes off his mask, where he is revealed to be Alex. A flashback is seen where Alex is standing over Robin's dead body after she falls from the window. The film ends as Alex dies in Kim's arms.

The Prom Night soundtrack is highly sought after, by fans of the film and disco fans alike. It was released only in Japan on LP and cassette. A 7 inch single of "All is Gone" b/w "Forever" was also released, however neither of these songs appears in the film. Many bootleg CD releases have also found their way onto the marketplace, but Prom Night has never been issued on CD. Some of the music used in the film was used in Canadian horror productions that Paul Zaza scored as well, 1981's Ghostkeeper and 1983's Curtains.

The film was originally released by Anchor Bay Entertainment on DVD on February 18, 1998, and was one of the company's first releases. This edition went out of print within a couple of years, and the film was nearly impossible to find on DVD. It was released again on DVD by Alliance Atlantis in March 2004, but the print used was from a worn-out VHS release, and was thus of very poor quality. Echo Bridge Entertainment re-released the film on DVD on September 4, 2007 in a high-quality, newly re-mastered print.

According to director Paul Lynch in the documentary "Going to Pieces: The Rise and Fall of the Slasher Film," he was having difficulty securing financing until Jamie Lee Curtis signed on. Once the film was shot, Paramount expressed interested in distributing the movie. However, they only wanted to open it in 300 theaters whereas Avco Embassy Pictures, who ultimately released Prom Night, offered to release it in 1200 theaters. As a result, Avco released Prom Night while Paramount released another independent slasher, Friday the 13th. 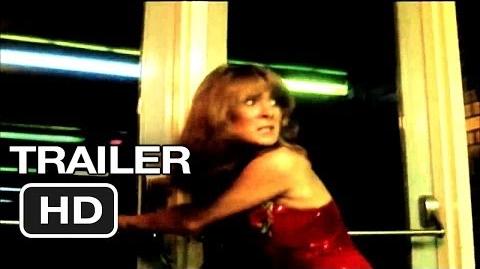 Retrieved from "https://horror.fandom.com/wiki/Prom_Night_(1980)?oldid=127678"
Community content is available under CC-BY-SA unless otherwise noted.