This page needs improvement. It can be improved by: pictures, information

Prom Night is a 2008 American horror film from Screen Gems, directed by Nelson McCormick and starring Brittany Snow. The film is a re-imagining of the 1980 Canadian horror film of the same name.

Donna's senior prom is supposed to be the best night of her life, though a sadistic killer from her past has different plans for her and her friends.

In 2005, Bridgeport native Donna Keppel returns home from a movie date with a friend to find her father and brother have been killed. In terror, Donna hides under the bed, when she sees her mother struggling with Richard Fenton, a former teacher of hers who had become obsessed with Donna. As Donna locks eyes with her terrified mother, she witnesses Fenton murder her.

Three years later, Donna is now living with her Aunt Karen and Uncle Jack, and is about to graduate from high school. She and her friends are getting ready to attend their senior prom that night. Donna, Lisa and Claire are getting ready at the hairdressers and Donna suddenly turn around to see Fenton, but realises she was just seeing things. Hours later, Donna's boyfriend, Bobby, arrives at her house, along with her friends and their boyfriends, Ronnie and Michael.

At the police station, Detective Winn, who imprisoned Fenton three years ago, learns that Fenton has escaped from prison and warns Karen and Jack, Jack thinks Donna should come home in case Fenton finds her location. But then Karen convinces him that she should stay at the prom.

At the prom, Fenton arrives at the hotel disguised as a man named Mr. Howard K. Ramsey, and takes a room on Donna's floor and kills the housekeeper to get the master key. On the dance floor, Claire has a fight with her boyfriend, Michael, and goes up to her room with Donna to calm down. After Donna leaves, Claire is alone and hears noises. She then sees Fenton, who proceeds to lock Claire into a room, to stab her and kill her. When Claire does not return, Michael goes upstairs to find her. Fenton hides in the room's closet, but Michael sees him shut the closet door. Michael opens the closet and is thrown to the ground by Fenton, who murders him.

Detective Winn arrives and warns the hotel staff to be on the alert. Fenton kills a hotel employee looking for the maid and takes his uniform. Lisa and Ronnie bump into Fenton in the elevator on their way to the room. While making out Lisa realizes that it was Fenton and runs off to warn Donna, but after taking the stairs she is caught by Fenton. She is chased down to the basement of the hotel where construction is taking place and she hides herself from Fenton. Lisa hides and sees Ronnie looking for her. Lisa leaves her spot and makes a run for it, but when Ronnie calls her name, she is caught and killed.

Winn and Detective Nash find the body of the hotel's owner in a car trunk. Winn goes up to the room and finds the housekeeper's body. Knowing for sure that Fenton is in the building under the name Ramsey, Winn sounds the emergency alarm and has the entire hotel evacuated. Donna goes back to the room to retrieve her mother's shawl and runs into Fenton and is attacked by him.

Realizing Donna is still inside Winn races back up to the room. Donna escapes Fenton. S.W.A.T. and police search the hotel, but find no sign of Fenton. Winn discovers the body of the employee Fenton killed earlier. Winn realizes Fenton left the hotel in the employee's uniform. Winn now races back to Donna's house and finds Detective Nash dead in his squad car. Inside Donna goes to the bathroom and returns to find Bobby's throat has been slit. She sees a shadow out in the hall and she hides in her closet, thinking the shadow is Fenton's. The person in the hall is revealed to be Detective Winn and Fenton grabs Donna in the closet. Winn is about to open the closet but then hears a scream from Donna's aunt, from noticing the dead officer on the ground outside so Winn runs to her bedroom. Donna is attacked by Fenton and a violent struggle ensues. When Fenton is about to stab Donna, Winn runs in and shoots Fenton several times, killing him. Donna cries over Bobby's dead body and Winn tells her it is over. 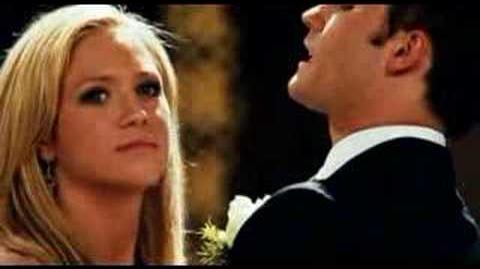 Retrieved from "https://horror.fandom.com/wiki/Prom_Night_(2008)?oldid=127688"
Community content is available under CC-BY-SA unless otherwise noted.